Asia hosts among the biggest cities in the world, some of which show that having a big population does not automatically means big problems. Tokyo for instance has nearly 3x the population of Metro Manila but people there do not experience horrible daily traffic congestion or water and power shortage.

But most other big cities in Asia generally experience what people in Metro Manila experience – like Delhi and Mumbai, Dhaka and Chittagong, Karachi and Lahore, Jakarta and Bekasi. 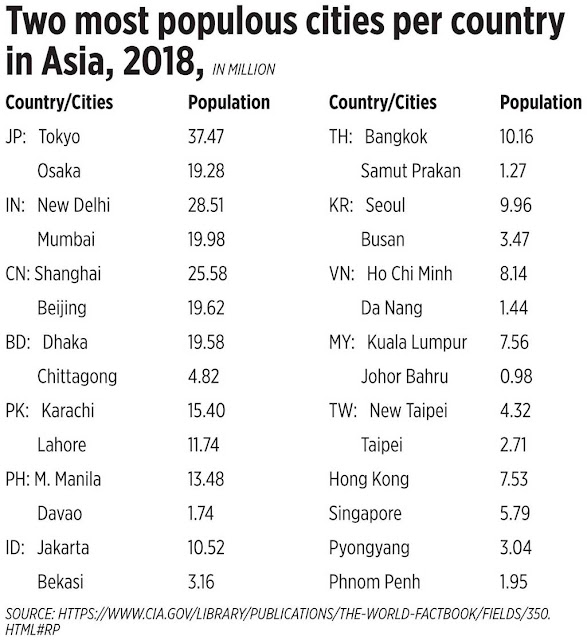 Discussions of developing “smart cities” to distinguish developing an entire country have surfaced in recent years. The purpose is to narrow down policy reforms in smaller geographical areas so that program implementation will be faster and more customized.

On this subject, the Friedrich Naumann Foundation for Freedom (FNF) is participating and hosting a panel discussion on “Smart Cities and Startups — Opportunities for Business Innovation” at the huge, 3-day “Jeju Forum for Peace and Prosperity” conference this coming May 29-31, 2019, at the International Convention Center Jeju, South Korea.

The FNF panel will be on Day 2 (May 30) and its speakers will explore challenges and opportunities that startup companies are facing and discuss strategies to create enabling ecosystems where they can thrive. Policy reforms would cover national and local regulatory framework, role of city governments and policies or regulations to support business innovation of startups, and drawing a line between freedom to innovate and freedom to privacy in the use of open data.

They pointed out two things among others and I agree with them: (a) “The megacity’s overdependence on the sole Angat Dam for Metro Manila’s water supply requirements has proven to be folly”, and (b) 20 years water privatization has been successful. They proposed the following measures:

1. Fast-track the construction and development of new water sources for Metro Manila.

3. Develop a Water Security Masterplan for Metro Manila and the entire country based on sound science and strengthen the National Water Resources Board.

Good proposals. I want to emphasize that our big problem yearly is not lack of water but too much rain water, too much flood especially during the months of July to September. But we do not have enough dams and lakes to store the huge volume of water, they just go straight to the sea.


The private sector should be allowed and encouraged to own private dams and man-made lakes, like mined-out big open pit mines. They can use the raw water for their community and corporate needs, and sell water to private water utilities and hydro-electric power plants. This should be among the market-oriented reforms for efficiency (MORE) that can help “smart cities” and business start ups so that these smaller units can prosper further.
----------------