ON May 29-31, the big “Jeju Forum for Peace and Prosperity” conference will be held at the International Convention Center Jeju, South Korea. It is an annual international and geographical platform to discuss diplomatic, economic, political and cultural subjects that include the North-South Korea relations, Korea-China-Japan-US relations and many more.

A unique topic, “Smart Cities and Startups — Opportunities for Business Innovation” will be discussed in the afternoon of May 30, the panel sponsored by the Friedrich Naumann Foundation for Freedom (FNF).

FNF is a German political foundation whose main advocacies are economic freedom, human rights and rule of law. Business startups can only prosper if there is economic freedom, private enterprises are not burdened with too many taxes, regulations and restrictions, they focus their resources innovating and dealing with their customers, suppliers and competitors. Human rights would include labor rights, employer rights, and other policies that remove various discrimination based on gender, race and other factors. And rule of law protects private investments from the dangers of state nationalization, expropriation, price control and related confiscatory policies.

To introduce the topic and its importance in today’s modernization will be Christian Taaks, Head of FNF Korea Office. To introduce the speakers and moderate the panel will be Waltraut Ritter, Founder of Knowledge Dialogues in Hong Kong. The three panel speakers will be Marc Bovenschulte, Director of the Institute for Innovation and Technology in Germany; Sofia Ramirez, Business Developer of Hawa Dawa in Germany; and Whang Ji Eun, Professor at the University of Seoul in Korea. Panel Rapporteur will be Pimrapaat Dusadeeisariyakul, Program Manager of FNF Thailand.

Jeju island itself can be considered a “smart city/province” as it is a self-governing province of S. Korea. Its main economic base is tourism so they allow visa-free entry for citizens of many countries including the Philippines, unlike landing in Incheon airport where a strict Korean visa is required.

Talking of islands and the Philippines as an archipelago of more than 7,500 islands and islets, one infrastructure project in the country that fascinates me is the Cebu–Cordova Link Expressway (CCLEx), aimed at connecting the southern part of Cebu City with Cordova in Mactan island and reducing travel time to Mactan-Cebu International Airport (MCIA).

CCLEx is an 8.5 kilometers tollroad including viaduct and causeway, 27 meters wide and a cable-stayed bridge 145 meters high. Its proponent is Metro Pacific Tollways Corp. (MPTC) costing about P30 billion in a pure integrated PPP scheme. So MPTC will build and finance it, then do the operation and maintenance (O&M) when it is completed and opened to the public in 2021. Meaning no additional public debt, and taxpayers from Luzon, Eastern and Western Visayas, Mindanao will not be burdened with paying its construction cost if it was under the ‘hybrid PPP’ scheme of the administration. Only those who use that expressway will pay for its construction cost and O&M, applying the users-pay principle, not all-taxpayers-pay scheme. 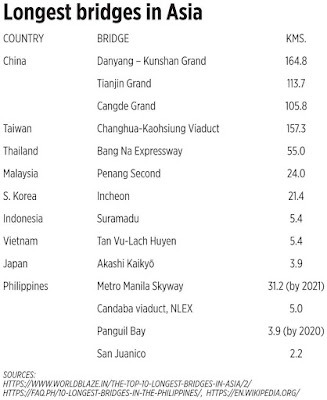 I spoke with the Managing Director of Norconsult Mgt. Services Phils. Inc., Mr. Director Rodolfo T. Azanza Jr. Norconsult is the Independent Consultant of the Grantor, Cebu City and Cordova City. They are upbeat about the potentials of this new project and will greatly decongest heavy traffic in the two existing bridges between Mandaue City and Mactan island.


Smart cities and provinces would include faster mobility of people and goods across islands and traffic-gridlocked cities. Where there is faster and greater mobility, there is greater economic freedom enjoyed by the people.
----------------