The Philippines’ tourism sector is among the more dynamic ones in the economy. The Department of Tourism (DoT) targeted 89.2 million domestic tourists in 2022 but this was already surpassed in 2017 with 97 million.

I checked tourism data from the Philippine Statistics Authority (PSA) and I was happily surprised with what I discovered — all indicators like foreign and domestic tourism expenditures as percent of household consumption and exports, tourism employment as percent of total employment, are increasing from 2000 to 2017 (see table). 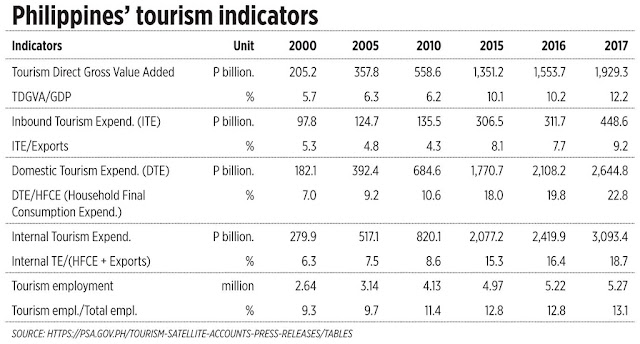 Those are the good news. The bad news is that recently the country has been experiencing some hiccups in public utilities — insufficient water in Metro Manila due to high demand, insufficient power supply in the Luzon grid due to unscheduled shutdown of several old but big power plants, and even short-period unscheduled disservice by one local telecom firm.

These are bad news for both locals and foreigners, especially short-term visitors. And this prompted the Senate leadership to announce prioritizing the amendment of the 82-year-old Public Service Act (PSA) via SB 1754, when Congress resumes sessions for three weeks after the May elections. The Senate Committee on Public Services is chaired by Sen. Grace Poe, currently running for reelection.

Both the House and Senate versions intend to remove transportation (sea, land, air) and telecommunications from the list of “public utilities” where foreign capital is either banned or limited to 40% maximum of corporate equity. Only three sectors will be retained as public utilities — electricity transmission, electricity distribution, and water supply and sewerage system.
While there is general agreement in Congress and the public to liberalize transportation (more bus lines, more shipping lines, more airlines competing), there are many doubts and reservations about liberalizing telecom because of the entry of China telecom via the third telco Mislatel.

A compromise solution perhaps is to drop telecom for now and proceed with transportation liberalization as this will greatly help boost the country’s tourism and investment environment. More competing shipping lines and airlines will attract more businesses and passengers into the country.

This compromise may not be easy because Malacañang is gung-ho about becoming much closer to Beijing. So Malacañang will settle this issue quick with the Senate leadership as time is too short to enact the PSA Amendment bill into a law.

After the PSA Amendment and liberalization law, next steps would be to have more airports, build bigger airports with two or more passenger terminals to include budget terminals and attract more budget airlines, domestic and foreign. Have more big and new conventional power plants that can give stable, 24/7 electricity at competitive prices, more wide roads going to airports, improved peace and order nationwide.
-----------------