The event was mainly sponsored by the Americans for Tax Reforms (ATR), Property Rights Alliance (PRA), International Policy Network (IPN) and about one or two other free market think tanks. 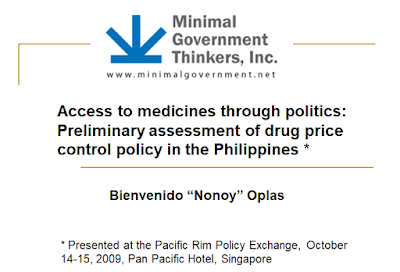 Price control is rooted on the populist belief that competitive capitalism is not happening in some sectors, that it is not possible to happen even at the theoretical level. Therefore, government should come in to protect the poor and marginalized sectors of society.

Big capitalists are painted as evil, the poor are  exploited, government is a savior, so the savior should intervene to temper the capitalists and ensure there is justice and equity in society.

In medicines, multinational pharmaceutical companies (MPCs) are often seen as foreign capitalists whose main business is to make as much profit as possible by bleeding the poor patients in poor countries

MPCs are seldom seen by the public as revolutionary innovators who create and produce new medicines for both old and new diseases.

A “hollowing out” and abolition of price competition and price segmentation above the horizontal supply curve.
Level of competition among different manufacturers and their respective drug products is reduced and shrunk.
Producers of more powerful but more expensive drugs will not be encouraged to bring such drugs into the country, constant threat of confiscation by the government of the success of innovation. 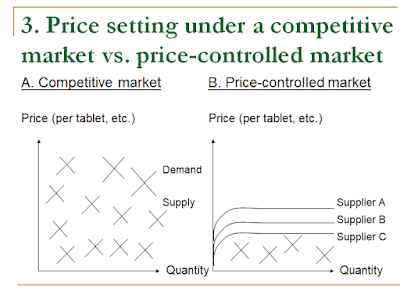 4. Politics of drug price control in the Philippines

No apparent national health emergency in the country at the time the price control provision was pushed hard, sometime in May to July this year.
Only “political emergency” as the Presidential election, once every 6 years, was only one year away.
Senator who was the main author of the Senate version of the law was then running for President but his ranking in various surveys was low. Need to champion something that is very emotional to voters.

“Not just a price control measure. It was a confiscatory price cut of 50%, in many cases for patented products! Even in countries that have this type of mechanisms, it usually applies once a patent expires, and only gradually. The impact, of course, is very negative: the rebates to the trade, and the impact in the price cut itself, both of which will run into several hundred millions of pesos. Also, it has added a level of uncertainty in our operations, since there is the threat of more price cuts still to come, with no clear understanding of what potential products could be affected, or what is the clear rationale to demand a straight 50% cut.”

MPCs will be unintentionally “raiding” a portion of the niche market of many LPCs,  poorer consumers who will now consider buying the “more affordable” products of the MPCs.

Also adversely affected. If they used to sell at say, 30 percent up to 49 percent lower than the equivalent products of MPCs under the previous free market set-up, they would find themselves that they are now the “expensive” sellers.
So they will be pressured to further bring down the price of their products. If they have some  allowance for such further price reduction, fine. If none, then either they stop selling their products affected by the price control to avoid losses, or continue selling at a loss, just to retain and protect their overall market share in the industry

Big drugstores are not affected much, have computerized system so MPCs can give the rebates more quickly
Small drugstores are greatly affected, non-computerized system, drug inventory is slow and may be unreliable, rebates by MPCs are delayed, so they suffer losses
Double price control: mandatory 50% under the new policy, plus another mandatory 20% discount for senior citizens and persons with disability (PWDs), draining their financial bottomline.

Experience difficulty recovering their administrative costs in the process of prescription + dispensation + monitoring + change of medication if necessary.
“We are in the business of world class health care, not in retailing medicines. We hire good people and give them good pay to educate patients. We not only prescribe medicines for our patients, we also monitor if the given medicines produce the desired results or not. If not, then we have to immediately change the medication to get the desirable health results that we want for our patients. There are costs to this.”

6.1 Government in general
Policies that turn off and discourage the entry of more players and competitors – like price control, heavy regulation and bureaucracies, high taxation and disrespect of private property rights – should be avoided.
Government targeting of the more expensive products which are branded, even patented products that are used by the wealthy population that can afford them, is not wise, more driven by envy.  Such policy has penalized successful brands and distorted the market.

“If the intention of the government was to really provide affordable medicines for the poor, they should have looked at the list of essential medicines from WHO, which consists mainly of off-patent, older products that are genericized and can be purchased at very low prices, both here and abroad, cut those prices and offer those products... Instead of spending money on expensive advertisements on "MDRP" and "GMA", they could have used that money to advertise those generic alternatives.”
Do NOT expand the list of drugs under government price control. Tantamount to expanding the distortions in the economy.

Do not create a new drug price control body, replace the current system where the DOH Secretary makes the recommendation, the President signs an Executive Order issuing price control on certain drugs.
Do not require drug manufacturers to submit annual reports of their marketing expenses to the DOH Secretary to monitor such expenses.
Do not introduce new mandatory discounts for certain groups of people where the costs are borne entirely by the drugstores.

6.4 Civil society and the public

Objectively monitor and assess both ST and LT implications of drug price control policy. It is the public, not the politicians, who will suffer from lack of competition among players and lack of choice among drugs.
So long as alternative drugs, so long as generic competitors are present, then public welfare is assured.
Push for more competition among drug producers and retailers, so that the public will have more choices. More choice means more freedom.