In a September 2017 paper, “Implementing the 10-point Socio-Economic Agenda,” the Arangkada Philippines Project (TAPP) made 22 recommendations for the power sector, among which are: (1) Support and approve the massive energy investments, (2) Increase the system reserve requirement to 25% of peak demand vs the current 17%, and (3) Formulate an energy road map (generation portfolio mix) with power supply quality, reliability and affordability as key objectives.

These are good recommendations to expand and ensure more stable power supply, more competition among more players, more consumer choices, and cheaper energy prices. Which are the main advocacies of the Market-Oriented Reforms for Efficiency (MORE) series in this column.

It is not possible to have sustained fast growth if there is no reliable, stable, 24/7 electricity in major economic centers if not nationwide. And the Philippines remains among the laggards in East Asia in terms of total electricity generation and kWh per capita. Then there is the persistent promotion plus subsidies to variable renewables solar and wind starting with the RE law of 2008 (RA 9513) but after 9 years, their combined output remains very small (see table). 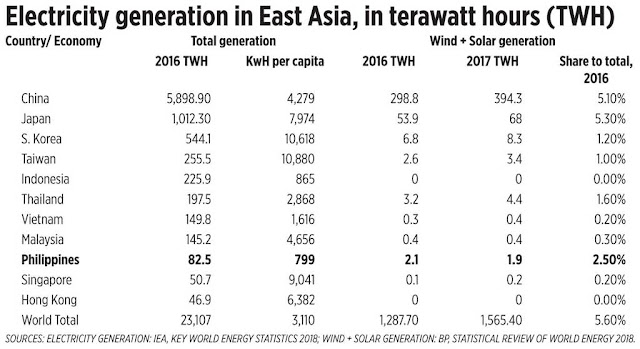 The good news is that the Energy Virtual One Stop Shop (EVOSS) law has been signed as RA 11234 on March 8. This will hasten approval and permitting system in power construction and development.

In a paper, “When There’s Too Much Sun and Wind” (WSJ, March 10, 2019), Rupert Darwall (author of “Green Tyranny: Exposing the Totalitarian Roots of the Climate Industrial Complex”) argued:
“(T)he most destructive consequence of wind and solar power result(s) from periods of oversupply… Coal and gas plants have to be kept on standby and ramped up to cover the shortfall resulting from still air and darkness. That forces them to operate less efficiently and pushes their costs up. During periods of low demand, wind and solar can produce too much electricity, creating gluts and driving wholesale prices negative, meaning grid operators have to pay consumers to burn unwanted energy.”

While the Philippines is still far from having wind + solar oversupply, strong legislative and executive lobbying point to that direction.

The interest of electricity consumers — more stable electricity at cheaper/competitive price, no additional taxes and subsidies like the feed in tariff (FIT) allowance — should prevail over government, as well as the RE lobby and environmental NGO interests that oppose fossil fuel power plants which can provide stable, cheaper power.
----------------