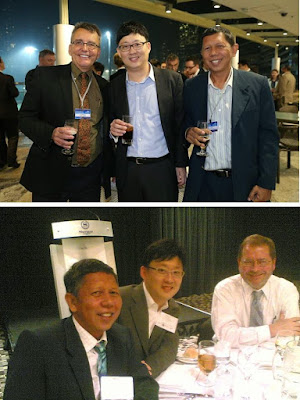 Starting this month, the new Chairman of Hong Kong's only free market think tank, the Lion Rock Institute, is my friend Peter Wong.

Above photo, with Fred Mcmahon of Fraser Institute (Canada) and Peter during the EFN Asia conference 2014 in Hong Kong. Lower photo, with Peter and Grover Norquist of the Americans for Tax Reforms (ATR) during the 4th Pacific Rim Policy Exchange 2010 in Sydney.

A message from the new Chairman of the Lion Rock Institute

My friend, Nick Sallnow-Smith, stepped down as the Chairman of the Lion Rock Institute in March, completing a three-year term. It is my honour to take over the Chairmanship of the Institute.

Three and a half years ago, I was appointed as the interim chairman for six months. The task was to find the right person to chair the Institute. At the time, I was attending an international conference with Nick in Turkey. The last day of the trip was a cruise in the Aegean sea. Knowing that he would soon step down as Chairman of the LINK REIT and is planning his retirement, an opportunity not to be missed, I immediately invited him to be our Chairman, which he accepted right away.

As time flies, and the three-year term has quickly passed, Nick summed up the experience and found that engagement with the state in any form is a waste of time and smacks of immorality. Our presence there made no difference to policy as the government already made up their mind what to do. But it did, however, enable the Commision to claim they had “consulted” many parties. Our presence had helped legitimate this ridiculous and damaging policy.

After witnessing the transformation of the SAR Government since the handover, I have long proposed that it is meaningless to getting too close to the government because what is the point, as a Chinese proverb suggests, to “ask a tiger for its own skin”?

Note that I am not targeting the SAR government specifically, but all worldwide governments around the world have a tendency to betray their voters. Even the British Parliament has tried to veto the Brexit plan passed by the referendum. It goes to show that the idea of the government serving the people, and the people are in control is nothing but a joke.

As Nick stepped down as chairman, I as the successor will continue to inherit his spirit. In the next three years, we will no longer actively lobby the government, but instead strive to alert the public how fierce and dangerous is this tiger (government). Educating the public on how to protect oneself under the tiger’s mouth will be our biggest goal ahead.
----------------