The first Asia Liberty Forum (ALF) by Atlas was held in October 2004 in Hong Kong and it was  originally titled "Asia Resource Bank Meeting" (ARBM). It was a two-days conference that preceded the two-days and bigger Economic Freedom Network (EFN) Asia conference, mainly sponsored by the Friedrich Naumann Foundation (FNF). The ARBM was a joint project of the Atlas Economic Research Foundation (now simply Atlas Network) and FNF. 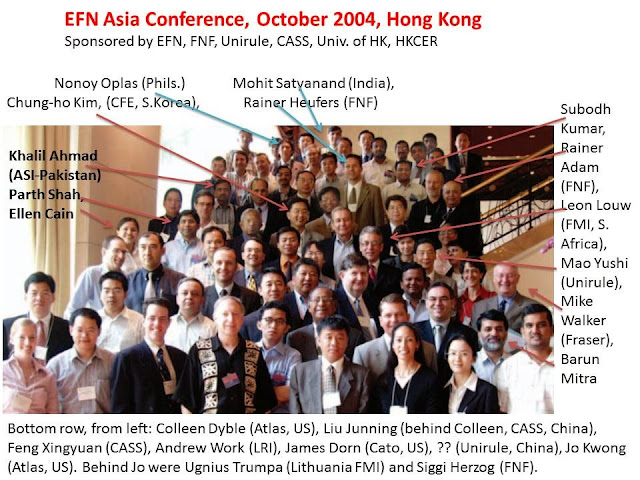 In 2005, the Atlas-FNF event was downscaled to a small group one-day RTD on the book of Friedrich Hayek, "The Constitution of Liberty" (1960). It also preceded the two-days EFN Asia conference held in Phuket, Thailand. 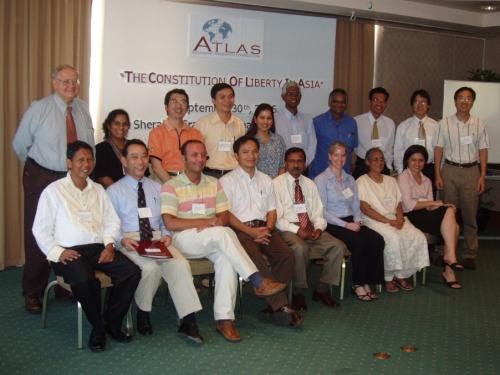 In 2006, the Atlas-FNF event was called the "Asia Liberty Forum", it was back to a bigger, one-day conference and again, preceded EFN Asia conference 2006, held in Kuala Lumpur.

In 2007, Atlas stopped co-sponsoring the ALF, so it was the regular EFN Asia conference 2007. I think it was held in Cambodia.

May 2007, our friend Colleen Dyble, Director for Coalition Relations of Atlas, wrote us, portions of it here:

I just wanted to let you know that Atlas is making some revisions in its program schedule this year.  One of the big changes it that we will not be hosting an Asian Liberty Forum this year.  After three successful years of partnering with the Friedrich Naumann Foundation to hold our Asian Liberty Forum in conjunction with their annual Economic Freedom Network meeting, Atlas has decided to move onto other programs for the moment.

As you know, Atlas began working with FNF to develop this Forum as a way to cultivate and expand the free market think tank network in Asia and to serve as a catalyst in helping it to get it to the point where it was able to thrive with limited assistance from Atlas.  After three fruitful meetings in Hong Kong, Phuket and Kuala Lumpur, Atlas has been very pleased to see significant growth in the number of new contacts from across Asia and is confident that the Asian network is now able to harness its internal leadership and momentum to develop its own networking meetings.   Of course, if one of you decides to host a future Asian Liberty Forum, let me know so we can explore potential opportunities to collaborate.   Atlas remains very interested in continuing to be involved in your efforts and to provide opportunities for you to get together with donors and others in the network to share ideas and collaborate on projects...."

I wrote to Colleen saying that somehow I had a feeling that the annual ALF will come to an end, and it has become true. I thanked her and Jo Kwong.

June 2008, the second PRPX was held in Hong Kong. The participation of Asian free market think tanks in Honolulu was small -- difficult to get US visa, expensive to go to Hawaii, etc. So for the 2nd conference, it was held in HK, mainly to attract more think tanks and business orgs from Asia to attend.

This month marked my 15th year involvement in the free market movement. It started when an Atlas staff in the US, Priscilla Tacujan, met me in February or March 2004 in Manila and recommended me to be one of two international fellows from the Philippines (the other one was Ellen Cain of FEF) to undergo one-month training and meetings in the US.

So around mid-2004, I and Ellen went to Midland, Michigan, to attend the Mackinac Leadership Conference. Mackinac President that time was Larry Reed. From Michigan we went to Chicago to attend the Atlas Liberty Forum 2004, also the Heritage Foundation's annual Resource Bank Meeting.

Those were my first exposure to the free market movement. Prior to that, I never knew anyone outside the Philippines who were free marketers.

And I also met Jo Kwong, then Atlas VP for Institute Relations. Jo is cool, aside from the fact that she's an Asian-American. It was Jo who recommended me to participate in ALF 2004-2006.

In 2010, Jo resigned from Atlas. I also received zero travel grant from Atlas ever since. Perhaps the new team disliked me, hehehe. No problem because other institutes and groups appreciated what I was doing here in Manila and they invited me to various regional and global seminars, meetings. Like the FNF, IPN, ATR, PRA, Heartland, IDEAS, WTA, Lion Rock, Geneva Network, etc. Thank you guys.
---------------