Yesterday, our plane flying Manila to Cebu left the terminal 8.35am on time. Then we were stuck at the tarmac for about 1 hour and 5 minutes before we got the go signal to fly, the usual airport congestion. It's boring inside the plane, the pilots and crew too should be bored while the airline spends huge volume of gasoline even if the plane is not flying. 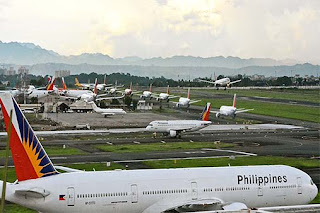 (This photo of long queu of commercial planes waiting for their turn to take off, from abs-cbn news.) Government should compensate airlines for the wasted gasoline, delayed flights and extended working hours of pilots and crew. Compensate also passengers for delayed flights, delayed meetings if any at destination, worse missed connection flights or boat sked. But this seems wishful thinking because the main business of govt is just to collect collect collect.

When I posted this in facebook, several friends reacted. Among the other testimonies are:

(1) Cecil PB: That happened to my son last March 31 due to air traffic daw at NAIA. The flight bound to Taiwan was delayed and a lot of passengers missed their flight to Houston. They were booked to a hotel by the airline and flew the next day to Tokyo then Houston. He arrived 15 hrs later than the suppose ETA.

(2) Gus C: My flight to Cebu was supposed to have left at 08:15. I arrived (with an on-line boarding pass) at the airport at 06:45 for boarding at 07:40 & learned that boarding time was delayed to 08:30 meaning our flight would depart at 09:00. Would you believe that we took off at 11:00. Good thing my first appointment in Cebu was for lunch. I still made it to the venue for a 13:30 late lunch. Coming back to Manila was equally stressful as the turn around plane was not able to take-off from Naia until past 21:00. I eventually got back in Naia at 23:15.

(3) Lorenzo G: That is our experience in every domestic flight Noy. 1 hour delayed in every take off, in Manila only, sa provincial airport hindi pumipila sa end of runway ang plane for take off. Too much congested ang NAIA.

(4) Bruce H: For the last seven days, my 10am flight to Dipolog was delayed each and every day by at least 50 minutes and sometime 90. However the time scheduled for the flight built in 45 minutes on the ground.

Bruce further added that “this is very predictable. In fact, so much so that the airlines have built the delay into their schedule. If you look at FlighTracker or another website or app you can see how every plane departs an hour after the schedule, or more. This is not caused by unforeseen circumstances. With a bit more thought, with a bit better planning, they could adjust flight slots so that when planes push back from the gate (which is defined by most airline-specific stats as "leaving on time") it can go straight to the runway to take off. Instead the powers-that-be make airlines queue, burning fuel, raising costs, polluting the atmosphere, etc. There is no reason for this. With a bit more thought, a bit better planning, then people would not be forced to wait on the tarmac, burning fuel, for longer than they are in the air.”

I thanked my friends for their observations and sharing of experience. It is frustrating that we directly pay taxes and fees on our plane fare, on top of taxes and fees that airlines indirectly pass on to us. Then we have delayed flight, delayed arrival at meeting or relaxation or connecting flight. And government is not accountable for such costs to the public and private enterprises, monetary or otherwise.
Posted by Bienvenido Oplas Jr at 7:39 AM