The good news in Philippine inflation is that the numbers are declining in the past three months of 2019. The bad news is that even such “low inflation” is actually the highest in East Asia, among the more mature economies with updated numbers. Dutertenomics should be ashamed of this.

And even in the Bangko Sentral ng Pilipinas (BSP) quarterly Business Confidence Survey, the trend is a continuing decline from 46.8 in 2015 to 34.0 in 2018. Again, Dutertenomics should be ashamed of this continuing erosion of business confidence in the country (see table). 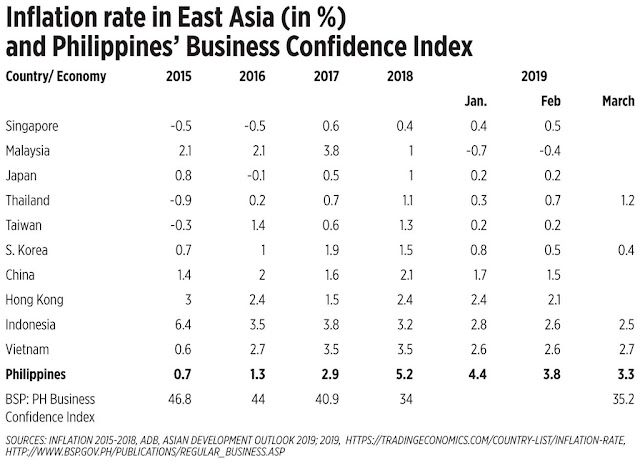 Meanwhile, we see President Duterte doing U-turns in major policies. First, his centerpiece program drug war, the kill-kill-kill policy, has resulted in some 25,000 murders but recently he admitted that he cannot control illegal drugs in his term.

Second, the shift from integrated PPP to hybrid PPP just to favor China contractors and financing — the need for more taxes to pay for more loans when many infrastructure projects can be financed entirely by private contractors under integrated PPP. Among the casualties of this shift is the delayed construction of Kaliwa Dam and additional 600 million liters per day for Metro Manila.

Third, his avowed fight against corruption is contradicted by the release from jail of two former senators linked to plunder, Sen. Bong Revilla and Jinggoy Estrada, who are each seeking a fresh term under the Hugpong/Duterte slate.
And fourth, his economic team’s avowed promise of economic stability is contradicted by deterioration in macro fundamentals. GDP growth is decelerating, 6.9% in 2016, 6.7% in 2017, and 6.3% in 2018. Inflation rate worsened ever since TRAIN law was implemented in 2018 with its high oil-coal tax hikes among other tax hikes, and business confidence index continues to decline.

The Duterte government’s economic management is poor while its political bragging is high. It has a chance to reverse this by at least targeting a 1-2% inflation rate this midterm election year via suspension of oil tax hikes part 2, or a tax cut somewhere. Instead, it continued its economic and political arrogance by expanding the spend-spend-spend, tax-tax-tax, borrow-borrow-borrow mantra.

I hope that voters will take note of these and punish the Duterte senatorial lineup, as well as their congressional and local government candidates.