Unlike physical property which is tangible, intellectual property rights (IPR) are intangible, like copyrights of songs, patents of newly invented medicine molecules, trademarks of known brands, and trade secrets. Thus, public appreciation of IPR protection is not as high as physical property protection.

A report in BusinessWorld, “Bill to be pushed strengthening intellectual property rights” (April 13, 2019) showed some data from the government Intellectual Property Office (IPOPHL) that piracy and counterfeiting of known brands were high in 2018:

Notice the top seven countries and economies — they have higher global ranking in property rights protection (out of 125 countries), also in Patent and Trademark per million population ranking (out of 140 countries), and higher per capita income of at least $9,600 in 2018. 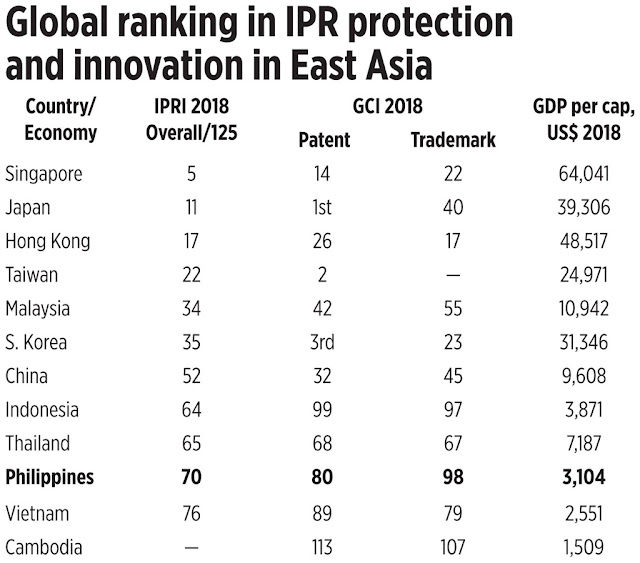 Middle of next month, the Geneva Network (UK) will hold a one-day seminar and meeting of some Asian free market think tanks and academics about IPR protection and trade to be held in Kuala Lumpur. And a week after, PRA (US) will hold a side event on IPR and investment promotion in Sydney during the bigger event, the 17th meeting of the World Taxpayers Association (WTA) conference.

IPR issues often crop up in public health policy debates. Like the continuing push in some Asian countries for compulsory licensing (CL) of newly invented drug molecules that are successful in controlling certain diseases. These are very expensive drugs to develop (many stages of clinical trials involving thousands of patients) and yet governments with the implicit aid of the WHO will quickly confiscate the patent and allow mass production by local generic manufacturers. This pours cold water on further medicines innovation that can help control existing and emerging diseases.

Then there are trademark-busting policies like plain packaging of certain products deemed “unhealthy” like tobacco, soda and sugary foods. Abolition of the many elaborate branding by competing companies and forcing only one generic packaging will make counterfeiting of these products so much easier. When cheap counterfeits come in, they will encourage, not discourage, more consumption of “unhealthy” products.

The “law of unintended consequences” often kicks in when the sanctity of private property is disregarded. The market-oriented reforms for efficiency (MORE) to promote public health, entice more investments and generate higher per capita income are also aimed at further protecting private property, physical or intellectual, not dishonor them.
----------------