1. "Warning Shot Across The Bow:" US Warns China On Aggressive Acts By Maritime Militia
by Tyler Durden Mon, 04/29/2019 - 22:15
https://www.zerohedge.com/news/2019-04-29/warning-shot-across-bow-us-warns-china-aggressive-acts-maritime-militia 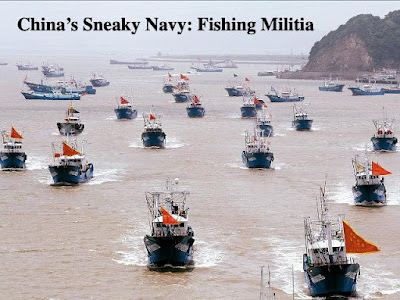 “Earlier this month, we reported that 275 Chinese fishing militia and Coast Guard vessels surrounded the island of Thitu in the South China Sea, which is currently being occupied by the Philippines. The US recently delivered a stern message to Beijing about its aggression in the highly disputed body of water, announcing that Chinese fishing militia and Coast Guard ships would be treated as military vessels.”

“The head of the U.S. Navy warned China that its coast guard and maritime militia will be treated in the same way as the nation’s navy in the South China Sea”

“The head of the U.S. Navy warned China that hostile behavior from its coast guard and fishing boats will not be treated any differently from the Chinese navy, the Financial Times reported on Sunday.”

“The US said it had sent two destroyers through the 112-mile-wide (180-kilometer-wide) strait on Sunday, to demonstrate Washington's commitment to maritime freedom in the region.

The move risks raising tensions with Beijing, and also comes as China ramps up assertions of sovereignty over the island. Beijing considers Taiwan to be an integral part of its territory.”


years in his administration when the PCA ruling was made in mid-July 2016, Duterte making only some noise vs China activities in the area only recently because even PAGASA island itself has being terrorized by so many China communist bullies and 'fishing militias'.

I am expecting that soon, Trump will sink some or many of those "non-naval" vessels in the area, to warn the real China communist naval vessels. Go Trump.

It's basic international law -- that area is international waters, no one should occupy and militarize it. Only communist bullies disregard intl law here.

"Good diplomatic relations with China before" is another claim by many Duterte diehards because Duterte super-loves Xi Jinping dictatorship and bullying.
----------------