The official campaign period for local and Congressional candidates for the May 2019 started last Friday, March 29. Tens of thousands of candidates plus their supporters went out on the streets and reached out to media to get the support of the undecided.

Also last Friday, I attended the “Benchmarking Cities: A roundtable discussion on infrastructure” sponsored by KPMG Manila, the speaker was Richard Threfall, the global head of KPMG Infrastructure. While Manila is not part of their initial coverage of cities in their report, a lot of the issues covered have relevance to the metropolis.

Local government responsibility and irresponsibility is the topic of this column’s Market-Oriented Reforms for Efficiency (MORE) series.

Last Friday this column discussed about fiscal irresponsibility of the national government as it keeps borrowing even without economic turmoil or crisis and the public debt stock keeps rising, already at P7.78 trillion as of end-2018 and interest payment alone at P349 billion that year.

One reason for that is the frequent free-riding attitude of most local government unit (LGU) leaders and congressional legislators. Many local projects are created and expanded without using local resources and rely on national funding. The result is having the national government in perennial budget deficit while LGUs have fiscal surplus, shown in their positive ending balance. Also many LGUs are still heavily reliant on their share of internal revenue allotment (IRA) from the central government (table 1). 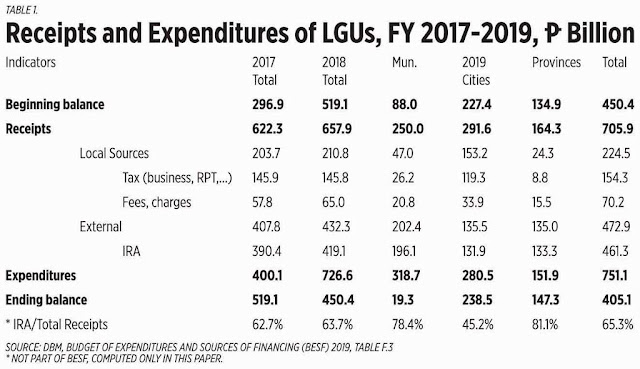 Many LGUs in Metro Manila do not follow this high IRA dependence, they rely more on local taxation, especially on business registration and real property tax (RPT), plus various regulatory fees and charges (table 2). 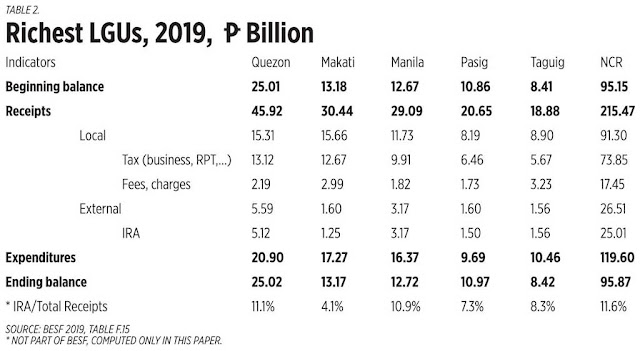 While low IRA dependence by these rich LGUs is commendable, it has also unleashed an itch for more taxation mentality at the local level. Many residents of Metro Manila are pampered with local government welfarism (free healthcare, free movies for senior citizens, protected squatter housing, etc.) which further attracts rural migration to the metropolis.

Both national and local governments should learn to respect the people’s right to keep more of their income and savings as a sign of fiscal responsibility. They should realize that the tax-tax-tax mentality for whatever populist agenda is a sign of public irresponsibility.
-----------------