Agri Econ 15: Why do Thailand and Vietnam Produce More Rice than the PH?

The new Administrator of the National Food Authority (NFA) and a friend, fellow UP  alumni, Renan Dalisay, shared in his fb wall photos of his recent visit to IRRI including meeting IRRI Dep. Dir. General Bruce Tolentino. Then he added,


Like many of you, i could not resist asking why other countries like Vietnam and Thailand, who learned the technology of rice planting in IRRI, are now way, way ahead of the Philippines in the area of rice production. The reply was simple and forthright, they walk their talk.


Dr. Bruce Tolentino's presentations earlier should have answered such question -- why Vietnam and Thailand have high rice output than PH. Here are two charts from some of his recent presentations. 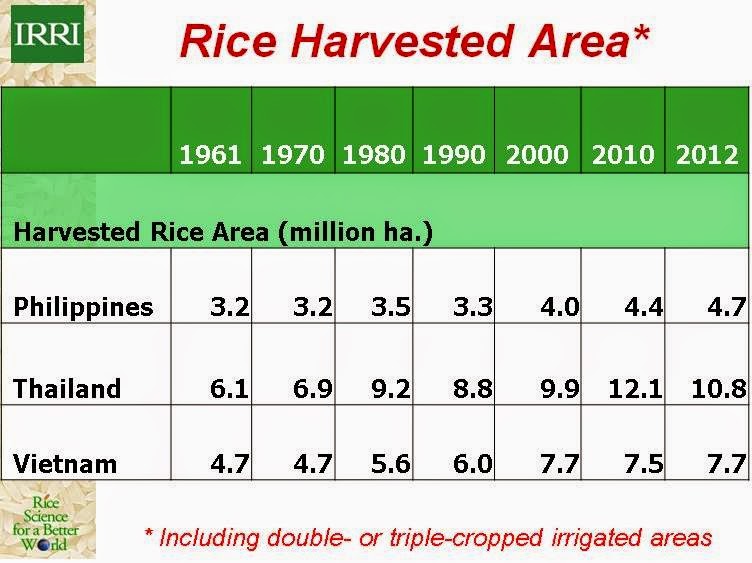 2. The term Thailand and Vietnam are "way ahead of the PH in rice production" is true on absolute rice output, but not for Thailand in average productivity per hectare. 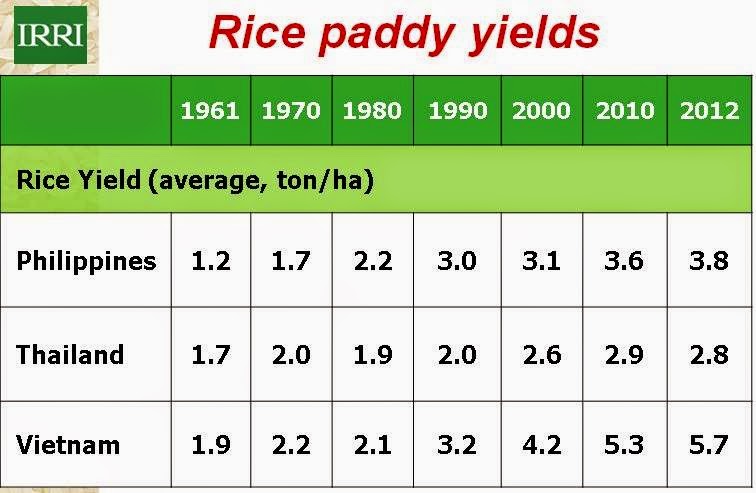 Another chart from Bruce T.

3. TH and VN are on mainland SE Asia. PH is far out and detached from the mainland. Them in the mainland have Mekong River, Ton Le Sap River, other huge rivers that provide huge irrigation. They also have wide flat lands suitable for rice farming.

And I will  add these additional factors:

4. VN and TH perhaps have only about 1/5 of the number of typhoons per year as those entering PH. On average, about 20 typhoons enter the PH, about half just pass nearby while another half make actual landfalls and cause more damages and crop losses.

5. VN and TH are done with their agrarian reform (AR) and forced land redistribution; the PH is not done yet, after 43 years of implementation, starting only in 1972 Marcos' land reform, not counting earlier land reform programs. No timetable, seemingly forever AR means endless uncertainty in agribusiness. Large scale rice farming is not possible because of potential political backlash.

7. Subsidies to rice farmers, it is also being done in the PH. Tractors and water pumps, farm roads and irrigation, seeds and credit support, etc., these subsidies are given by the PH national government to small rice farmers. LGUs have their own subsidies too.

The cost  of production can always be lowered through technology and biotech. But  crop losses due to frequent typhoons, especially in the current  period of global cooling -- more rains, more flood -- losses cannot be easily controlled or minimized.

If the PH government should insist on rice "self-sufficiency", then it should allow corporate, large scale rice farming. Economies of scale, tapping lots of plant scientists and geneticists, will greatly improve PH rice output.

What is wrong with selling cheap rice from Thailand, Vietnam and Cambodia? Do people glorify expensive rice via rice protectionism, rice QR and rice tariff? Then turn around and lambast the government, lambast anyone else, why PH rice prices are high? 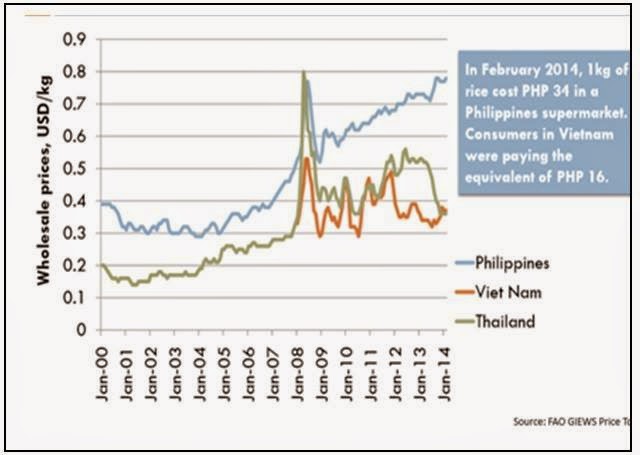 The quick solution to  more rice supply in the  PH is through free trade, Abolish  rice protectionism, even  NFA monopoly in rice importation and  licensing of  importers. Allow those cheap rice from Th and Vietnam, and Cambodia, to be sold here cheaply too.
-----------