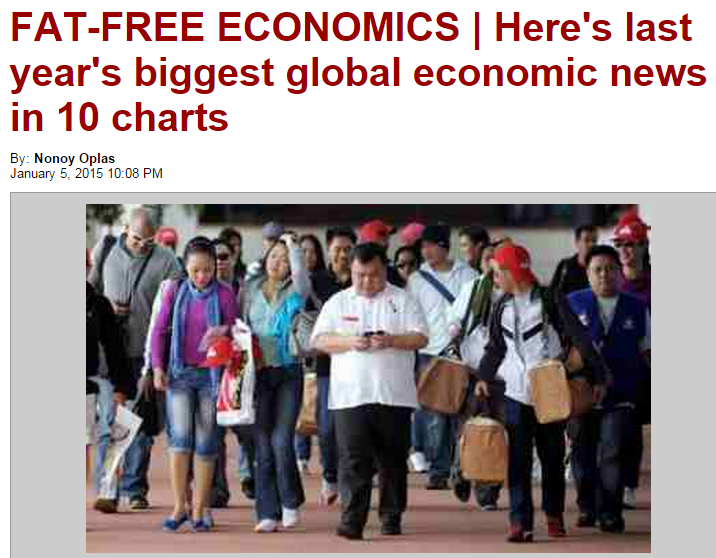 Last year saw another roller coaster ride for the global economy. Below is a list of the most important economic news around the world, and what we can learn from them as we navigate 2015.

This is definitely the single biggest item of business news of 2014. From a record US$107 a barrel in mid-June, West Texas Intermediate (WTI) at the New York Mercantile Exchange was halved, closing at $53 at end-2014.

Here is the chart for the last 45 years of WTI prices. The big question now is whether oil prices will breach the low levels of nearly $40 a barrel made in May 2009, during the US housing and mortgage financial turmoil. 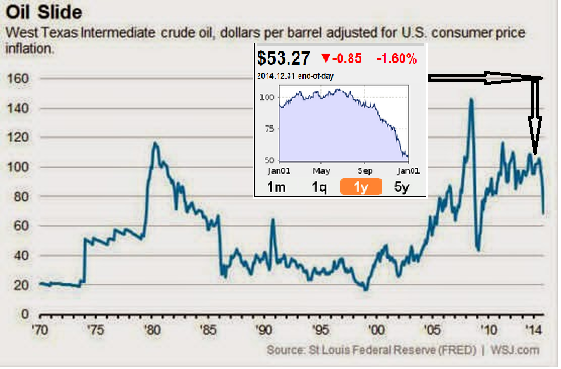 Thank you competitive capitalism for reasserting yourself. The oil cartel OPEC was helpless in countering the new capitalism in shale oil and gas, especially in the US and Canada. The world has entered a world of rising abundance, with cheap oil seen cementing that achievement.

The shale oil and gas revolution in the US has catapulted it to become a major oil producing country, churning out more than nine million barrels a day. The chart below shows growth of oil production from 2008-2013. 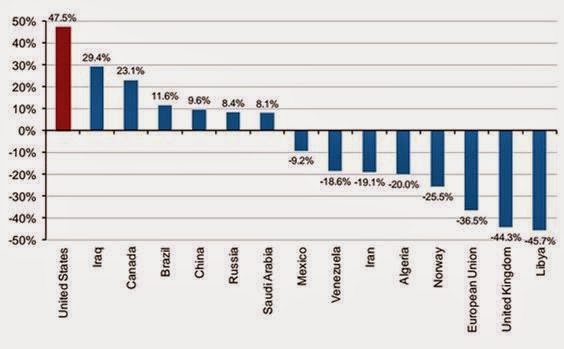 Ten million barrels a day or higher this year is not a far out possibility as the technology for shale oil and gas fracking  keeps improving.

There are huge negative implications for many traditional oil-exporting economies like Russia and OPEC member-countries. Russia’s currency ruble and its international reserves have been walloped in recent weeks. 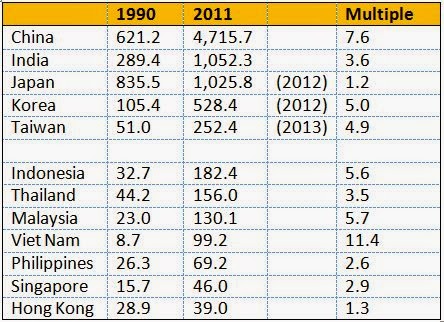 In contrast, cheap and stable energy sources kept businesses in Asia humming. They are generally not hamstrung by expensive and unstable energy yet that can make Asian companies become less competitive. Data below show electricity production in billion kilowatt-hours (kWh).

Source: ADB, Key Indicators of Asia and the Pacific 2014

2. Major decline in prices of natural gas, rice and other commodities

More people around the world are becoming coffee drinkers. Less tea and beer? Below is the performance of selected commodities as of December 31, 2014.

Fiscal crisis by many fiscally irresponsible governments (FIGs) in Europe and elsewhere has been avoided in 2014. These countries have been hooked on a “spend-tax-borrow-borrow more” policy. If supply of credit does not keep up with demand and debt, interest rates should go up. This did not happen, which means capitalism worldwide is adjusting and getting more efficient, producing  more surplus that it can continue to bail out those FIGs with low interest rates even if they continue with their endless borrowing policy. 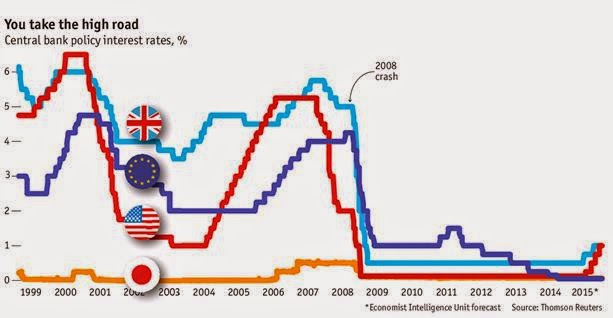 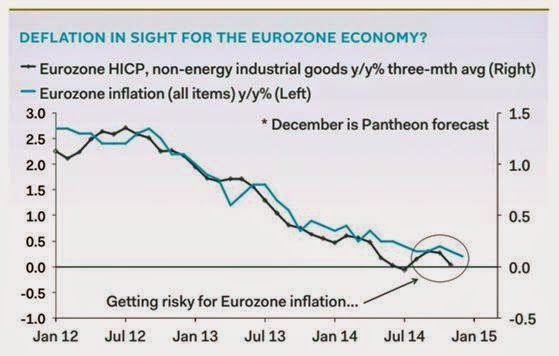 In fact, there is deflationary pressure in Europe. High prices partly due to high taxes contribute to low spending by many Europeans. Cheap oil should encourage them to travel and spend more, but it seems the opposite is happening, as people are spending less.
Source: http://www.businessinsider.com/europes-chief-economist-says-deflation-is-coming-2014-12

There are two types of deflation. The good or benign one is supply-driven expansion of commodities due to productivity improvements in labor, capital and other factors of production. Thus, people can buy more powerful mobile phones and, flat TV at low or declining prices.

The bad or malignant type of deflation is when people are worried and scared to spend beyond their necessities. Low consumption means low demand for other people's production, which can lead to recession and hence more unemployment.

Inequality is natural and inevitable. Growth and wealth creation is faster if people have more economic freedom, the freedom to be industrious, hard-working, efficient and innovative. It also includes the freedom to be lazy, wasteful, non-ambitious and dependent, and these two sets of attitudes expand inequality in society.

So Thomas Piketty, the UN, WB, IMF, ADB, national governments, and socialists who complain a lot about rising inequality are wrong. 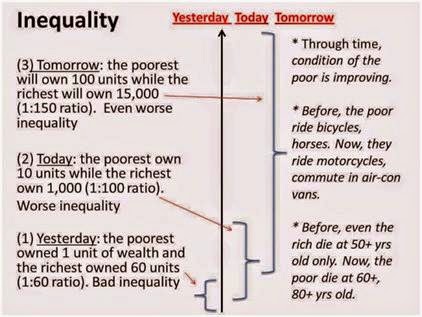 People are assets, not liabilities. So more people means more producers and consumers; more entrepreneurs and workers. Training people towards certain skills is relatively easier these days because of the continuing revolution in ICT. 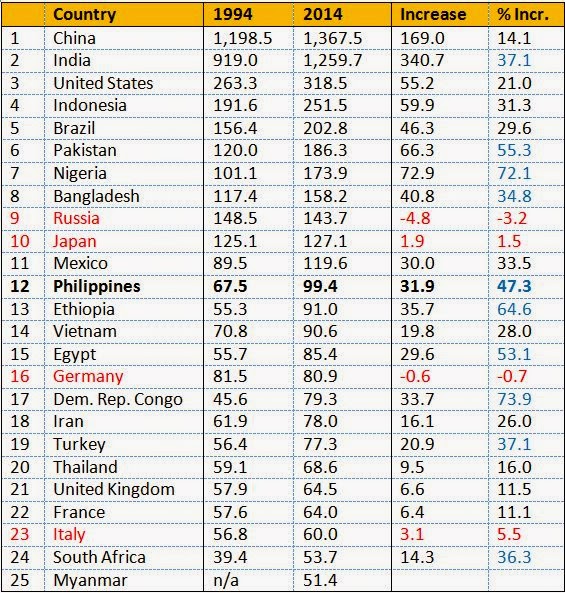 Countries whose populations are either growing slow, or even depopulating like Russia and Germany,  are marked in red. Two decades ago, UK, France and Italy were in the top 20 most populous countries in the world. Now they are out.

Notice that several African countries are growing very fast – Nigeria, Ethiopia, Egypt and Congo. Also notice that five of the top 25 countries are from Asean alone. In Southeast Asia, demographic dividend is very visible in the Philippines. 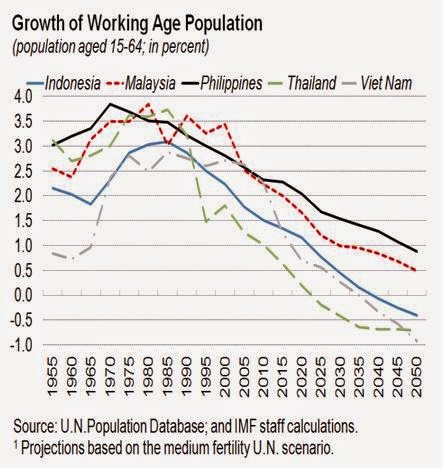 Our young and big population means more working age, less dependent people. Other countries salivate at such a scenario. They need more robots and migrant workers to keep their companies and businesses running, and they will be forced to offer competitive pay to attract migrant labor, including those from the Philippines. 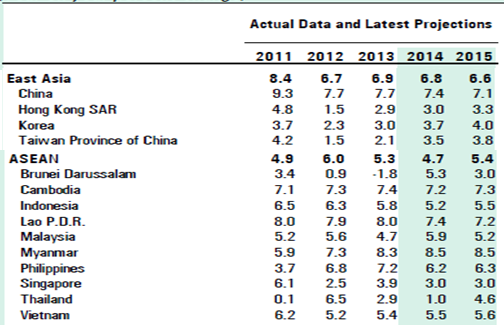 And they are able to sustain it, at least over the short-term, judging from growth data shown below.

Overall, there are more positive and hopeful news in 2014 and previous years that can catapult the Philippines among other countries towards more abundance and prosperity this year and beyond.
------------