I support land reclamation in Manila Bay. Remove those thick silt, mud, sand, other solid wastes in river beds near the bay. Also the thick lahar deposits in Bulacan rivers that contribute to frequent street flooding. I am indifferent who should do the reclamation project, the important thing is that someone should do it, soon. 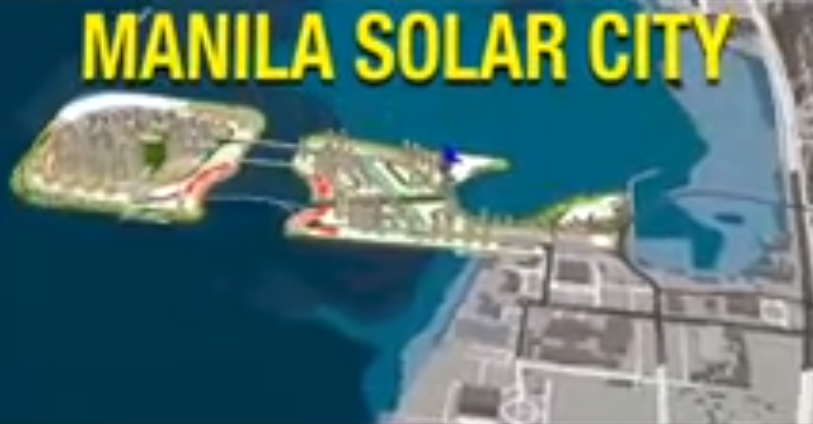 There are two (or more?) proposed land reclamation projects in Manila Bay. The Solar City project by the Manila Goldcoast Development Corp. in Manila City area, and the SM project in Pasay City. 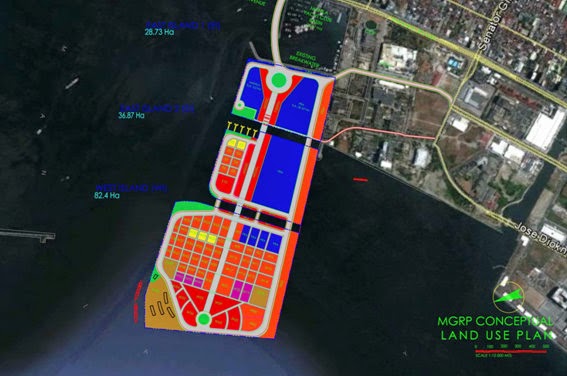 Another view of the proposed Solar City. This seems to be the extension of the CCP complex, which itself is a huge land reclamation project of the Marcos administration some 3-4 decades ago.

The front area is not wide, it is elongated towards the sea.

In Pasay City, The SM group seems to have already bagged the project, 600 hectares of new land in the sea. Good. But Ayala Land is contesting the awarding to SM Land. 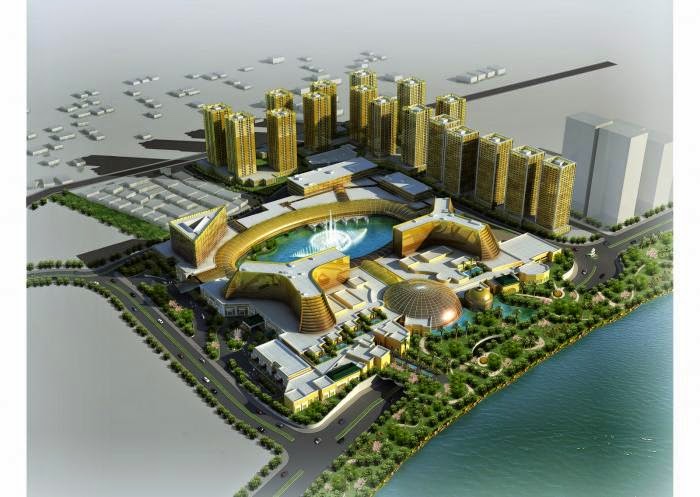 This is the proposed project of SM Land. Whether it is SM Land or Ayala Land or Megaworld or Federal, etc., I am indifferent. Just remove those silt and mud in river beds, make the rivers deep again. At no cost to taxpayers.

A friend in Marilao, Bulacan told me that in many barangays, the local government has constructed new roads that are around 1 to 1.5 meter (3-4.5 ft) high from the original road to spare them from flooding. Houses and shops cannot be raised that much, so these structures will endure horrible flooding every year. Lahar deposits in many Bulacan rivers are thick. There is only one viable solution -- large-scale, massive, sustained, dredging of the rivers. Remove the sand, stones and rock deposits in river beds and make them deeper again.

Pinatubo erupted in 1991, and brought down hundreds of millions of cubic meters of sand, soil, stones and rocks via lahar for 24 years now. 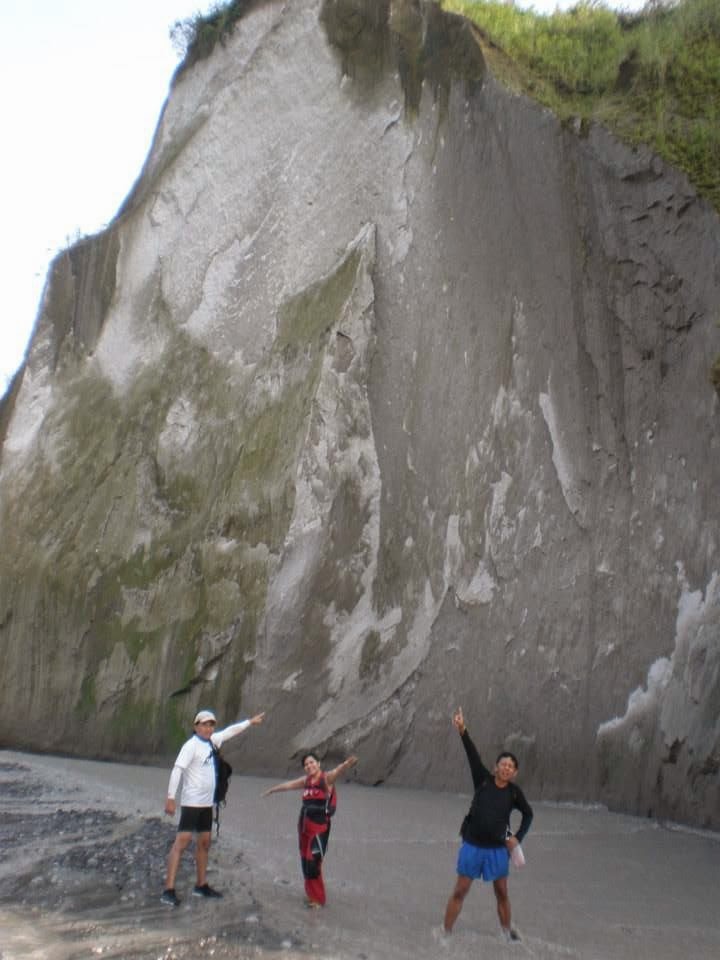 Last October, I and some friends tried to climb Mt. Pinatubo via Porac River, Pampanga. We saw these, so many hills or even mountains of sand waiting to go down for the next 20 or 30 years more perhaps. That means flooding in Bulacan rivers will worsen in the coming years. Unless massive, large scale dredging of those rivers are done regularly.

Not only Bulacan but some Pampanga municipalities too, would be courting more frequent street flooding as the rivers are getting more silted. More sand deposits waiting to go down in the coming years. And this is in Porac River alone. The other rivers of Tarlac and Pampanga have huge deposits of sand and rocks up there. 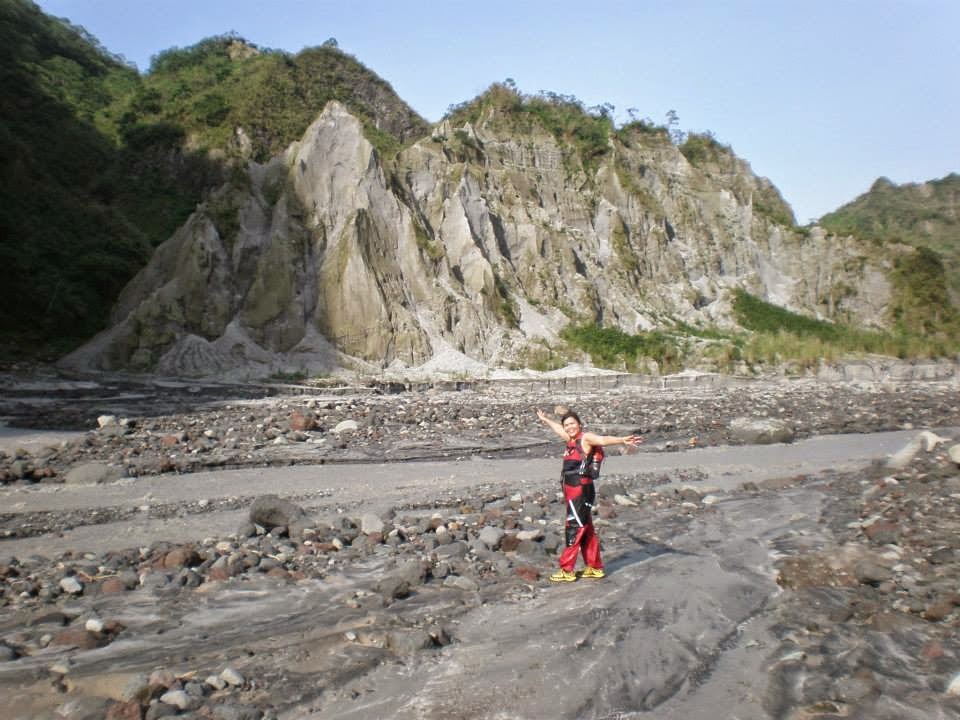 These sand, mud, other silt on river beds need to be removed. Where to throw and dump them? Not in Metro Manila, not in Bulacan or elsewhere, but in the sea, via land reclamation. And more structures, more roads, more jobs, will be created in the near future.

MMDA and the city governments of Metro Manila, instead of hiring more employees, they should focus on regular, annual dredging of drainage, creeks and rivers in their localities. But they may also be asking, "So where do we dump/throw the hundreds of trucks of silt, mud and solid waste from river beds?"


Land reclamation is a good solution to that problem. Developers of land reclamation projects abroad usually buy soil and rocks from nearby islands or countries. No need to buy here, just use those thick and  huge volume of solid waste and river silts. Even the garbage disposal problem of Metro Manila can be partially solved by compacting these solid wastes and use them as filling materials.

Again, there are market solutions to market problems of flooding and  solid wastes disposal. But people should allow players with resources and ambitions to develop certain areas, and not just oppose and oppose to new initiatives.