The Pope in Manila, Security Paranoia vs People on the Roads

Pope Francis' visit here is nice and good. The Philippines is the only predominantly-Catholic country in Asia, about 80 percent of its 100 million population consider themselves as Catholics. Thus, a visit of the Pope is a big event for many people here.

But I saw in tv that the security system laid by the PH is OA and too paranoid. Why?

1. Closure of the airport (NAIA) for five hours, 2-7pm yesterday.

The Pope's plane from Sri Lanka was scheduled to arrive at 5:45pm yesterday but the government closed the airport at 2pm, Five of zero activity at the airport except the arrival of the Papal plane, when that airport has one activity, landing or take off, every 30 seconds I think. So many flights in and out of the airport, domestic and international, were either postponed or cancelled or diverted, affecting tens of thousands of passengers.

They could have closed the airport from 5-7 pm only.

The Pope's plane arrived on time but the motorcade started late. From Villamor Airbase to the Papal house in Manila, they were travelling fast as if there was a very important meeting at the destination. Tens of thousands of people were waiting for the Pope as early as 3pm perhaps in that short route. They could h ave slowed down to allow those people to see the Pope much longer.

In this photo, notice the wide gap between the thousands of people and the Pope's mobile car as police cars made a wide  gap from the crowd, at a fast speed. ALL photos below I got from  the web, not one from my camera. 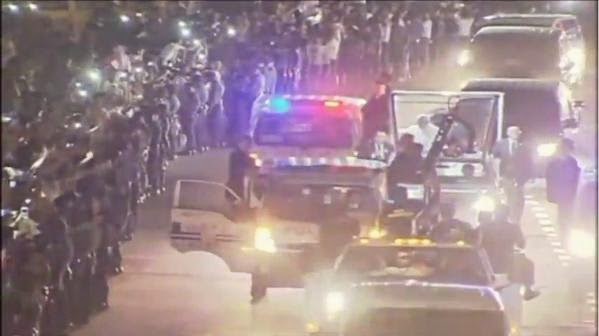 Yesterday, I arrived at Terminal 3 around 11:30am, CX flight from HK. Hardly any taxi, long lines of passengers waiting for the yellow airport taxi, so I took the white bus to Baclaran. I saw there were already some people at Roxas Blvd. Baclaran area waiting for the Pope. So for these people, they waited since 11am or 12 noon, and the Pope passed by around 6:45 pm on a whiizz and they hardly saw him. 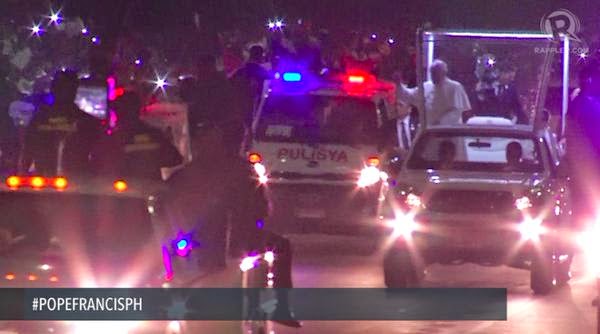 Then this morning, a huge crowd of people were waiting on the roads again waiting for the Pope to pass by, in a short distance from the Papal house to Malacanang to meet again the President and his official family. 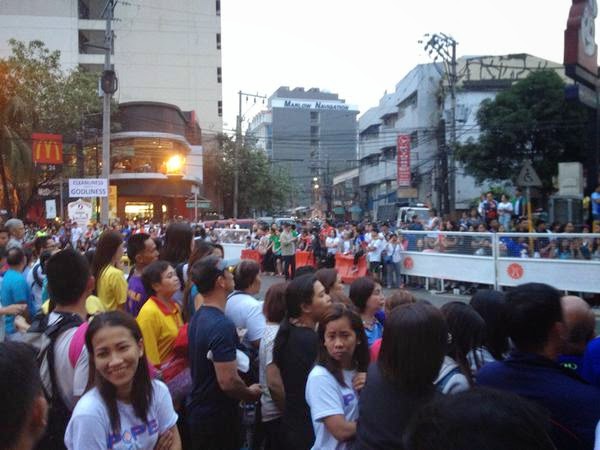 Then they were moving fast again from the Papal house to Malcanang, And instead of a single column of cars, they have 2-3 columns near the Pope's car, making him far from the huge crowd. 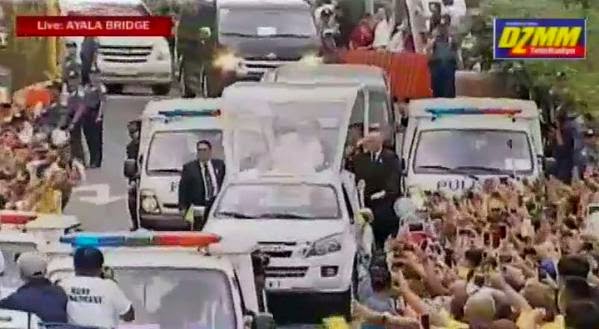 The Pope's visit is good and nice. People can further affirm their religious faith when they see the head of the church, flying from Vatican to Asia. But the militaized security paranoia is not. 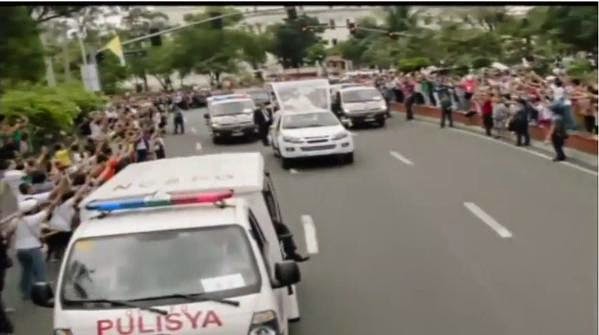 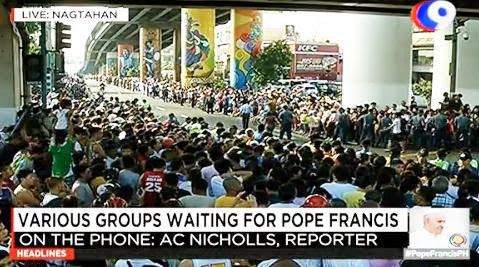 The police and other security system should have slowed down the motorcade, allow the people on the roads to see the Pope much closer, much longer. He is the "People's Pope", not the government's Pope. It is not good when a militarized system would take over the movement of the Pope.

3. Temporary loss of mobile signal  and internet connection especially in areas near his motorcade route.

Since yesterday evening, internet connection  was slow in our house in Makati, far from the motorcade route or from the place that he is staying. It continued until this morning. It turns out that the National Telecommunications Commission (NTC) has ordered the two telecoms company to do so. Zero connection near the motorcade and meeting area, slow connection nearby, several kilometers away.

Please do not misunderstand this post. This is NOT a party-popper against the Pope and his visit to the Philippines. Rather, this is a party-popper to the paranoid security system that the government has designed.
-----------