Which is more realistic and beneficial for consumers in reducing energy prices: removing the VAT (value-added tax) on electricity or removing the red tape and bureaucracy that stall construction of new power plants which will increase competition among players?
This is the question that Dr. Ramon Clarete, faculty member, former Dean of the UP School of Economics (UPSE) and Fellow of the Energy Policy Development Program (EPDP), tried to answer during the EPDP lecture last week at UPSE.

Dr. Clarete made various simulations and his econometric analysis showed the following:

If VAT is retained but red tape is eliminated, tax revenues increase by P21.9B or P1.7B/year.

Conclusion: Better eliminate red tape and unnecessary bureaucracies involved in issuing energy permits than abolish VAT on electricity. And electricity consumers will be better off with lower prices.

The paper is still undergoing further revisions. Once finalized, EPDP will publish it on its Web site.

I support the recommendation for two reasons.

One, for the rule of law to be more effective and respectable, a tax or subsidy should apply to all sectors, no exemption. Thus, it is wrong to impose VAT on food, clothing, and medicine purchases but not on electricity and other goods and services. Second, government has been expanding all these years such that its seeming purpose has been to further entrench and expand itself, endlessly. So instead of two or three agencies giving business permits, there are now 15 to 30 agencies involved; and instead of just one or two permits and signatures per agency, there are now three or more permits per agency.

How bad is the situation in the Philippines’ energy sector? Here is one such study covering the hydro power sector.

Under the Duterte administration, there are now moves by the Departments of Energy and Finance and other agencies to reduce the 160 or so government permits which take energy companies five years to comply with. Hopefully this can be reduced to at most 50 permits and require at most two years to comply with.

The problem with government is that for every regulation that it can shrink or abolish, it also creates two or more new regulations.

In the energy sector, there is a new DENR order that new coal power plants being proposed will also require getting the approval of the Climate Change Commission (CCC).

This doesn’t bode well because for the CCC, coal power is tantamount to an evil-demon resource that should be controlled and disallowed whenever possible, and only new renewables like wind and solar should be allowed with various subsidies and price guarantee for two decades.

This thinking is highly faulty and anomalous because coal power remains among the cheapest and most reliable energy sources worldwide. Blackouts and darkness have many social and economic costs to the people. There are more robberies, rape, murders and other crimes, more road accidents if streets are dark at night.

See the comparative levelized cost of electricity (LCOE) per energy resource in the US based on a recent study by the Institute for Energy Research (IER) last July. They used the US government’s Energy Information Administration (EIA) assumption for 2020 capacity factor to derive the numbers. 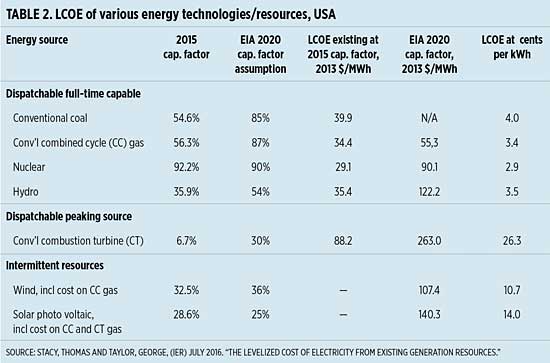 So the cost per kWh of coal and natural gas -- two important fossil fuel sources -- is only about 1/3 the cost of wind and solar. Plus the fact that coal and gas are reliable, available 24/7 except under maintenance shutdown, and dispatchable upon demand changes (increase or decrease).

The lobbying of certain sectors to discontinue the use of coal power in the Philippines before the end of their economic lives, and that any new energy demand should be supplied only by the intermittent sources, is unwise and dangerous.

The Philippines used 82.6 terawatt hours or 82.6 billion kilowatt hours of electricity in 2015.

If all of this were generated from solar PV power plants and if the cost is the same as the US where solar price is 10 cents or P4.70 (at P47/$) per kWh more expensive than coal, then Philippine-based consumers should have paid P388B (= 82.6B kWh x P4.70/kWh extra cost) in extra cost or more expensive electricity in 2015.

If divided among the 101 million Filipinos that year, this means that each Filipino, newly-born babies and oldies alike, would have paid an additional P3,843 per head, on top of what they paid in electricity consumption in 2015.