This was reported in Philippine Star, Manila: No more trikes, pedicabs next month, September 18, 2016. So the Manila City government has followed the ADB e-trike cronyism. Tricycles, whether electric or gasoline run, are still tricycles. Low passengers capacity, drivers tend to be unruly. Even small population countries like SG and Brunei don't have tricycles. A country with 103 M people should ultimately have as few tricycles as possible, more high passengers capacity vehicles like trains and buses.

Some people argue that since many people are poor, then we should allow more tricycles, pedicabs, small jeepneys, kariton, etc. on the roads. Typical 1950s or 60s argument. I think by 2030s, 2050s, this argument will still be used. 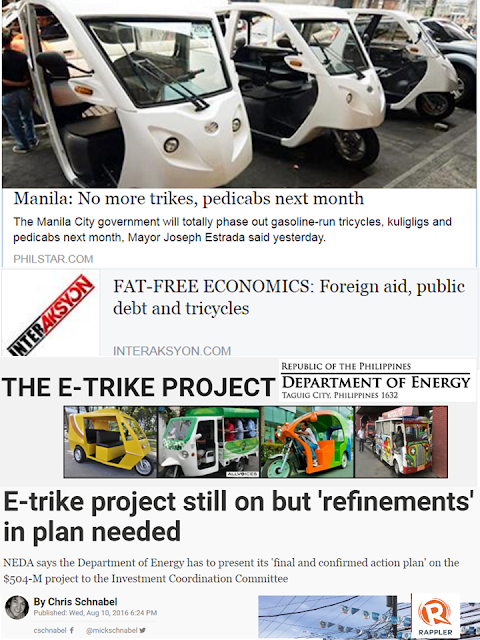 From that report, "The city government, with the requisite resolution from the city council, has appropriated an initial amount of P120 million to buy 10,000 seven-seater e-trikes."

Ayon, small-scale cronyism in capex alone. Taxpayers will pay for the units ultimately.

"On an e-trike, they will not spend a single centavo for gasoline. The battery charging will be shouldered by the city government,” Estrada said."

Ayon pa, even opex like daily charging will be shouldered by the taxpayers again.

Assuming that only half of those 10,000 e-trikes will charge at night at Manila City Hall, imagine the heavy traffic in that area as thousands of e-trikes line up for free electricity charging, 4 hours each.

I would assume that there will be dozens of charging stations distributed across Manila City. Fine. So, Manila City govt's monthly electricity bill will rise to tens or hundreds of millions of pesos on top of its regular bill. Then the city govt will raise local taxes, fees, penalties, borrowings, to service this huge e-trikes cronyism? Magaleeeng. Si ADB nagpasimuno nyan e-trikes cronyism in the PH. Originally $300 M loan to get 100,000 e-trikes for distribution to selected cities and tourist spots nationwide.

"Recharging" of gas-fed vehicles like tricycles is easy and fast. They can buy at any station in Manila, QC, Pasay, Makati, etc. Load gasoline for 1-3 minutes (assuming there is no queuing) and be out. For e-trikes, it's the opposite. (a) charging time is 4 hours (minimum, I guess), and (b) very few charging stations. 100% this will cause massive traffic jam in those few charging stations. More traffic congestion in already heavily-congested Manila city. Really "bright" idea.

Meanwhile, the DOE continues to sell the e-trike project, giving these justifications:


* 100,000 locally made E-Trikes by 2018
* Higher income (low operating cost: 7 kWh of electricity or 80 pesos vs 5 liters of gasoline 250 pesos)
* No down payment: payments from daily savings
* 5-year or 80,000 km warranty with after sales service
* Long-life lithium-ion battery with solar charging options


* Modern transport: good looking, no noise, no pollution, safe and comfortable to ride

Really, DOE? (1) More tricycles, not less? (2) Only P80 full charging cost for 4(?) hours?
(3) Taxpayers will make the downpayment and succeeding payments, right? It's a loan, not grant;
(4) 5 years warranty, by companies that sprouted only a year or several years ago?

And the cost, $504 M loan or P23.7 billion at P47/$. Why should government get a loan for private, multi-owners transport project?

Government should step back from e-trikes favoritism and by extension, renewables cronyism and climate alarmism. All these initiatives are part of their "save the planet" drama. Government is lousy when it gets out of its basic, fundamental function, its raison d'etre -- promulgating the rule of law and protecting the citizens' three basic freedom.
------------

Hello Everybody,
My name is Ahmad Asnul Brunei, I contacted Mr Osman Loan Firm for a business loan amount of $250,000, Then i was told about the step of approving my requested loan amount, after taking the risk again because i was so much desperate of setting up a business to my greatest surprise, the loan amount was credited to my bank account within 24 banking hours without any stress of getting my loan. I was surprise because i was first fall a victim of scam! If you are interested of securing any loan amount & you are located in any country, I'll advise you can contact Mr Osman Loan Firm via email osmanloanserves@gmail.com