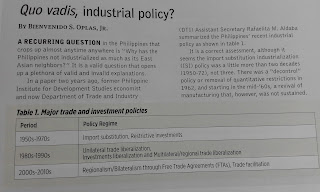 Quo vadis, industrial policy?
A recurring question in the Philippines that crops up almost anytime anywhere is, “Why has the Philippines not industrialized as much as its East Asian neighbors?” It is a valid question, that opens up a plethora of valid and invalid explanations.

Source: Rafaelita Aldaba, “Twenty years after Philippine trade liberalization and industrialization: what has happened and where do we go from here,” PIDS Discussion Paper No. 2013-21, March 2013, Table 1. 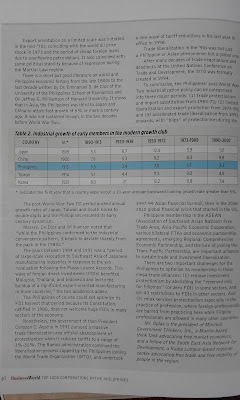 It is a correct assessment, although it seems the import substitution industrialization (ISI) policy was just more than two decades (1950-72), not three. There was a “decontrol” policy or removal of quantitative restrictions (QRs) in 1962, and starting in the mid-60s, a revival of manufacturing was initiated but was not sustained.

Export orientation on a limited scale was initiated in the mid-70s, coinciding with the world oil price shock in 1973 and the period of cheap foreign loans due to over-flowing petro dollars. It also coincided with some political stability because of political repression during the Martial Law regime.

There is a short but good literature on world and Philippines economic history from the late 1800s to the last decade written by Dr. de Dios of the UP School of Economics (UPSE) and Dr. Williamson of Harvard University. It shows that in Asia, the Philippines was third to Japan and China to attain fast growth of 5 percent or more a century ago. It was not sustained though, in the two decades before World War Two.

Messrs  de Dios and Williamson noted that “While the Philippines conformed to the industrial convergence pattern, it began to deviate sharply from the pack in the 1980s.”

The years between 1984‐1991 was a “period of large‐scale relocation to Southeast Asia of Japanese manufacturing industries in response to the yen revaluation following the Plaza‐Louvre Accords. This wave of foreign direct investments (FDIs) benefited Malaysia, Thailand, and Indonesia and led to the build‐up of a significant export‐oriented manufacturing in those countries”, the two academics added.

The Philippines of course could not optimize its FDI harvest that period because its Constitution made and ratified in 1986, does not welcome huge FDIs in many sectors of the economy.

Nonetheless, the government of then President Corazon C. Aquino in 1991 pursued a massive trade liberalization and official abandonment of protectionism when it reduced tariffs to a range of 3%‐30%. The Ramos administration continued the liberalization process capped by the Philippines joining the World Trade Organization (WTO), and undertook a new wave of tariff reductions in his last year in office in 1998.

Trade liberalization in the 90s was not just a Philippines or Asian phenomenon but a global one.
After many decades of trade negotiations and deadlocks at the United Nations Conference on Trade and Development (UNCTAD), the WTO was formally created in 1994.

To summarize, the Philippines’ post-WW2 industrialization policy can be categorized into three major periods: (1) trade protectionism and import substitution from 1950-72, (2) limited liberalization and export promotion  from 1973-90, and (3) accelerated trade liberalization from 1991 onwards, with “blips”of protectionism in 1997-99 Asian financial turmoil, then 2008-2010 global  financial crisis that started in the US.

There are two important challenges for the Philippines to optimize its membership  in those mega trade alliances: (1) remove investment protectionism by abolishing the “reserved only for Filipinos” (or zero FDI) in some sectors, and 60-40 restrictions to FDIs in other sectors. And (2) relax services protectionism especially in the practice of profession, where foreign professionals are barred from practicing here while Filipino professionals are allowed in many other countries.


Mr. Oplas is the President of Minimal Government Thinkers, Inc., a Manila-based think tank advocating free market economics, and a Fellow of the South East Asia Network for Development (SEANET), a Kuala Lumpur-based regional center advocating free trade and free mobility of people in  the region.
---------------