Last October 9, 2016, Filipina actress Agot Isidro posted in her fb wall 3 points about her opinion of the President, the 3rd of which was the most controversial, "you are not bipolar, you are a psychopath". It was shared several thousand times, re-shared further, picked up by local and foreign media.

Famous fb commentator Bernard Ong posted this in his wall that day:

Psychopaths are superficially charming, make a good first impression on others. Self-centered, dishonest & undependable. Engage in irresponsible behavior. Devoid of guilt, empathy & love – they have casual & callous interpersonal & romantic relationships. Offer excuses for their reckless & outrageous actions, placing blame on others rather than taking responsibility. Rarely learn from mistakes or negative feedback. Have difficulty controlling their impulses.

Psychopaths are not psychotic or insane (dissociated from reality). Psychopaths are usually rational. They are aware that their irresponsible or illegal actions are wrong in the eyes of society. They just don’t care anyway.

Psychopathy is treatable, or at least manageable. Most psychopaths resist voluntary treatment. Even if core personality traits of psychopaths are difficult to change, their criminal & reckless behaviors may be amenable to treatment.

Now here’s the twist. Psychopaths are not the same as sociopaths. Both exhibit similar anti-social behaviors (law-breaking, lying & deceit, impulsive acts, fighting & aggression, disregard for safety of others, irresponsible, lack of guilt or remorse).

According to psychologist Michael Tompkins, the main difference is that a psychopath does not have a conscience, he does not feel any moral qualms. A sociopath has a weak conscience. He knows his action is wrong but will do it anyway. Psychopaths are considered more dangerous.

Researchers believe psychopathy is likely a genetic disposition (related to underdeveloped parts of the brain) while sociopathy is likely a result of environmental factors (e.g. upbringing, child abuse, childhood trauma).

A visit to a psychiatrist is advised. They can help diagnose which is which & subsequently plan proper treatment.

So the question is this: Should we be like the adults who pretended to be blind? Or the little girl named Agot who innocently said the obvious - "The Emperor has No Clothes". 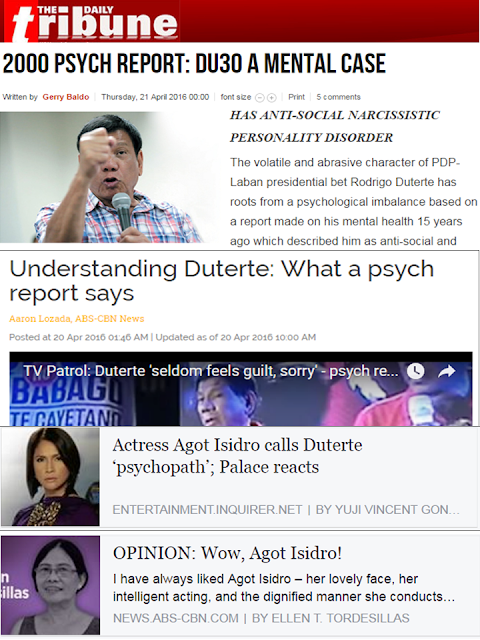 The volatile and abrasive character of PDP-Laban presidential bet Rodrigo Duterte has roots from a psychological imbalance based on a report made on his mental health 15 years ago which described him as anti-social and narcissistic.

A psychological assessment on Duterte which appeared in a television news report stated that he has an “Antisocial Narcissistic Personality Disorder” or what psychologists refer to as psychopathy.

The report said the assessment became the basis for the civil annulment of Duterte’s marriage to first wife, Elizabeth Zimmerman.
Because of this personality disorder, the report said Duterte tends to humiliate other people or violate their rights.

International Statistical Classification of Diseases and Related Health Problems, tenth edition (ICD-10), of the World Health Organization (WHO) called what afflicts Duterte as a dissocial personality disorder which is characterized by at least three of the following:
- callous unconcern for the feelings of others;
- gross and persistent attitude of irresponsibility and disregard for social norms, rules, and obligations;
- incapacity to maintain enduring relationships, though having no difficulty in establishing them;
- very low tolerance to frustration and a low threshold for discharge of aggression, including violence;
- incapacity to experience guilt or to profit from experience, particularly punishment; and
- marked readiness to blame others or to offer plausible rationali-zations for the behavior that has brought the person into conflict with society.

The WHO paper states that the diagnosis included “amoral, antisocial, asocial, psychopathic, and sociopathic personality.”

The assessment on Duterte’s personality, conducted in 2000, also showed that the mayor has difficulty controlling his emotions. He was also described as impulsive and because of this, he usually does not consider the implications of his acts.

The assessment was undertaken by psychologist Natividad Dayan, former president of the International Council of Psychologists, and concluded that Duterte was suffering from “Antisocial Narcissistic Personality Disorder,” a condition charac-terized by “gross indifference, insensitivity and self-centeredness,” “grandiose sense of self-entitlement and manipulative behaviors” and “pervasive tendency to demean, humiliate others and violate their rights and feelings.”
“For all his wrongdoings, he tends to rationalize and feel justified. Hence, he seldom feels a sense of guilt or remorse,” the assessment said....

No or little feeling of remorse, keeps repeating past mistakes and violent behavior (physical or verbal like the frequent SOB or PI, Pakyu,...), always blame others never the self.
-----------