The total cost of Germany’s green energy transition (Energiewende) amounts to over €520 billion euros by 2025 in the electricity sector alone. This is the result of a report commissioned by the Düsseldorf Institute for Competition Economics (DICE) on behalf of the Initiative New Social Market Economy (INSM)....

By far the biggest cost driver with a total of €408 billion is the levy to finance renewable energy (EEG levy). The expansion of electricity and distribution networks totals €55.3 billion. The study is the first full-cost estimate which takes all the costs of the energy transition in the electricity sector into account. In addition to the direct costs of subsidising renewable energy, indirect expenditures such as the cost for the expansion of transmission and distribution networks were included in the calculations, as well as offshore liability expenses and network, capacity and replacement costs.

At the end of 2015, 150 billion euros had already been spent on the Energiewende, not including the cost for network expansion. The bulk of the costs (25.000 euros for a family of four) will have to be paid in coming years." -- Translation by The Global Warming Policy Foundation, UK

And aside from expensive, unstable electricity from renewables like wind and solar, they devour the natural beauty of the countryside. Many German environmentalists are now turning 180 deg, from support to attack. 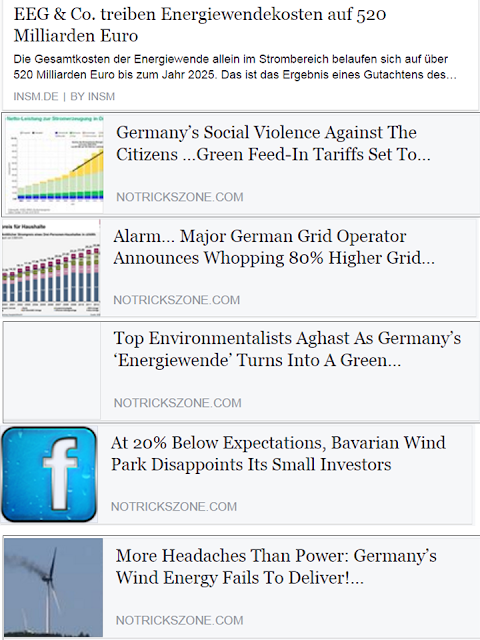 Vahrenholt writes that already today Germany has the second highest electricity price (after Denmark) in Europe and that the so-called renewable energy feed-in tariff will rise from 6.35 €ct/kwh today “to an astounding 7.3 €ct/kwh in 2017“. Germany’s green energy feed-in act generates an additional cost to consumers of some 25 billion euros annually, paid by citizens via their power bill. This represents “a social transfer from bottom to top of immense dimensions“. http://notrickszone.com/.../power-expert-says-germany.../

"often wind parks are approved by politician’s who have a direct interest and business dealings in them, meaning the industry is rampant crony capitalism – the very kind that Germans are typically famous for opposing. For example Rannungen mayor Fridolin Zehner had a wind turbine built where none is supposed to be built – on his own land – thus allowing the honorable mayor to cash in on lucrative leasing fees – to the tune of 10,000 euros annually." http://notrickszone.com/.../germans-media-sobers-up-to.../ 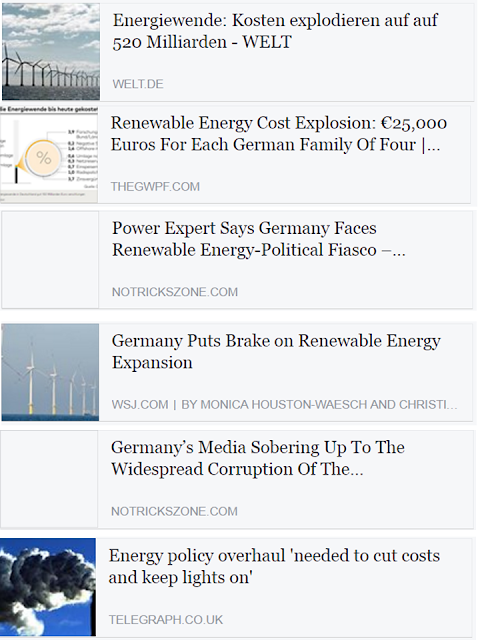 "The Institute for Competition Economics at the University of Dusseldorf has calculated the total cost of Germany’s Green Energy Transition. The result: By 2025, an estimated €520 billion euros will be spent. A family of four will pay more than 25,000 euros for the Energiewende.

Seldom was a German environment minister more ridiculed and mocked than Peter Altmaier (CDU): Three years ago, the current Chancellery Minister warned that the cost of the Energiewende could, if nothing were done, “cost the country around one trillion euros by the 2030.”

Major magazines and weekly newspapers from Wirtschaftswoche to Die Zeit immediately snapped that the environment minister must have got it wrong. “Don’t scare the living daylights out of people with horror figures,” Baden-Württemberg’s Prime Minister and Green Party star Winfried Kretschmann demanded." http://www.thegwpf.com/germanys-renewable-energy-cost.../
---------------