BWorld 87, Economic, fiscal and energy policies of the Duterte administration

The new administration of President Rodrigo Duterte will turn 100 days old this week. The basis for its assessment is still sketchy and raw, so one way to further assess it later is to see some baseline figures when it assumed office.

These four reactors particularly mentioned the high prices and limited capacity of the Philippine’s energy sector. They pointed out that this factor, among others, reduces the country’s competitiveness compared to our ASEAN neighbors. Mr. Chikiamco and Mr. Chua in particular mentioned the problem of pushing more renewables wind and solar into the national grid as contributing to rising electricity prices and even affecting the grid stability.

Below are some numbers presented during the forum. I added the data on electricity generation (in terawatt hours) to further contextualize the points made by the four mentioned discussants (see Table 1). 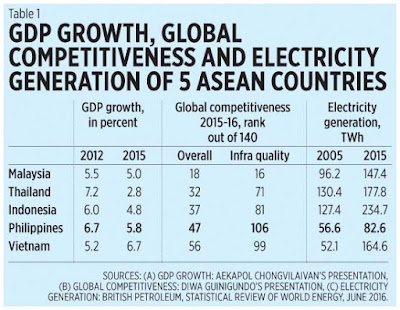 Sec. Diokno did not give comparative data for some ASEAN countries, only the Philippines’ fiscal data. He only emphasized the bigger focus of Duterte administration to expand and improve the country’s infrastructure to address the Philippines’ low rank in global competitiveness surveys.

So as baseline data: First, the Philippine economy has been growing rather fast until 2015 and the challenge is how to sustain this expansion. Second, overall global competitiveness is good enough but ranking in infrastructure quality is low. And third, growth of our power generation remained low, only 46% after one decade. In contrast, Indonesia’s power capacity has expanded nearly twice after a decade while Vietnam’s has expanded more than three times.

The big challenge therefore is to allocate more public resources for infrastructure development.

To get the additional funds, the new government will have to discontinue -- or at least significantly cut the budgets -- of some programs and projects that have questionable impact on poverty alleviation. These funds should then be reallocated to help bankroll more infrastructure projects.

Second, attract more private players and investors in coal and natural gas power generation, in road tollways, in seaports and airports, in rail-based urban transportation. This process is non-burdensome to taxpayers because these public goods are funded via user-pay principle.

For instance, only those who regularly use NLEx and SLEx pay for the capital expenditure and maintenance of those roads, not taxpayers who live far away who hardly ever use these roads.

It is also good that the President has explicitly declared that we cannot turn our back in using cheaper and stable energy from fossil fuels like coal and natural because of our fast rising energy demand that require 24/7 power. It is not possible to sustain fast growth without cheaper and stable electricity supply. Energy precedes economic development, it is not vice versa.

In the presentation by Mr. Guinigundo, he showed important reform measures from 1993 to 2016. I will show here some, especially those referring to enhancing more economic competition, liberalization and deregulation (see Table 2). 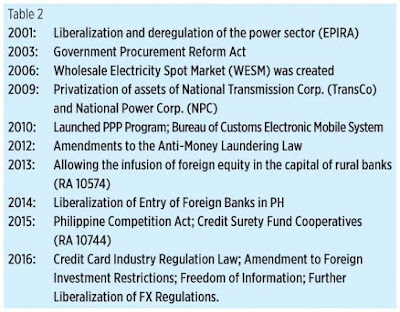 If we remove the uncertainties of murders and disrespect for due process related to the ongoing “war on drugs,” the Duterte administration is starting on good and relatively stable macroeconomic platform. It just needs to sustain the momentum while hastening development and expansion of public infrastructure, especially in roads and energy.
---------------