Tax Cut 27, The Furusato tax in Japan as possible model in citizen empowerment 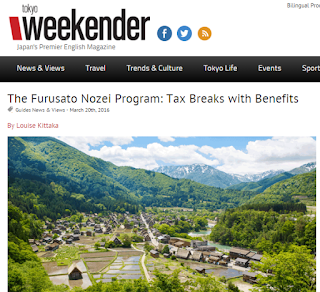 The program was launched in 2008 as a way for a person to make a charitable donation to a municipality or prefecture of their choice—whether or not it was their hometown. Donors can even specify the purpose for which they want the money to be used: educational projects and helping the elderly are two examples. Beyond the feel-good aspect, though, there are two benefits that make donating all the sweeter.

The other benefit… The municipalities and prefectures often send back “thank you” gifts to donors, typically in the form of local products and specialties. A tax break and return goodies into the bargain—what’s not to like?

Power over the purse. Taxpayers in Japan decide how their taxes are spent.

Yes that is right. Power over the purse, an authority granted only to politicians, members of Congress( House of Representatives) and local councils( I think) of municipalities, cities and provincial government.

Furusato Tax, as it is popular known in Japan, grants the same power to tax payers. Essentially, it let tax payers decide how their taxes will be spent. At the moment, it only covers a small percentage of ones income tax and limited only to allocating the tax to local government units and or villages.

It is done on an annual basis too. You can decided to donate to a different local government unit next time around. The main purpose of the program is to support development in the countrysides by channeling taxes away from big cities like Tokyo. However, the program also make the intended beneficiaries ( local government units) compete and be more accountable. They would need to 'sell' to tax payers the projects they intend to fund and explain how the money was spent.
As an added appeal to tax payers, local government units who receive your taxes, lavish the donor with 'tokens' of gratitude from as simple as a 'thank you' note to as enticing as a 2 kilograms of sirloin steak, a paraglading tour, and many more.

Just this year, our family was gifted with a 700.00$ voucher that can be use on any MontBelle strore( Japan's largest outdoor product company akin to NorthFace). Already, we've spent 200.00$ of that on a very nice and lightweight down sleeping bag. Tomorrow, we are travelling to a rural village next to the Japan Alps with a 2days/3nights paid for by the village that received our tax donation. Power over the purse.

Who says democracy is limited only to casting ones ballot?!

he best tax policy is zero income tax, governments to survive on their roughly dozen types of consumption-based taxes (VAT, excise tax, travel tax, property tax,...). Then people will have more money in their pockets and they can spend more, like buying more fruits and veggies from Cagayan Valley or Bicol, etc., or visiting those regions and provinces and spend money there. Those provinces and cities of course will be competing with each other to attract more tourists, local and foreign, knowing that people have more money in their pockets than before. A few countries have zero income tax policy -- Brunei, UAE, Monaco,... Some have flat 10%, flat 12%, tax.

The second best tax policy is this type. But I think the national central planners will hate this type of "power to the purse" by the taxpayers. Remember they are so bright, so intelligent, they have so many data, and they are backed by dozens of consultants with PhD, the foreign aid agencies, so they can't be wrong, right?

The third best tax policy perhaps is status quo but income tax will be as small as possible, like 5-10% flat rate.