These are news reports from September 21 to 23, except the news on "Killings prompt 'hesitation' among European investors" which was published a month earlier, August 2016. I also include here the fb postings by a friend, famous commentator Bernard Ong. No further comments from me. 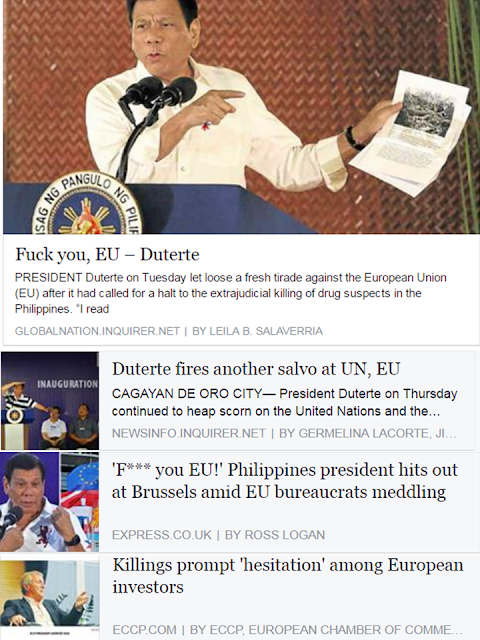 "China supplies almost 100% of the shabu to the Philippines. Coddles the international drug lords & their syndicates. Takes over our seas & reefs. Chases Pinoy fishermen away from their traditional livelihoods. Corrupts our local officials to extract minerals in irresponsible manner.

Sounds 1000x more damaging than other countries urging the Philippines to respect universal human rights. Something we ought to be doing without anybody's prodding.

If you must say Pakyu. Be brave, be smart. Point your Pakyus in the right direction.

Pity the die-hard followers who have to switch-on & switch-off their anti-US hatred and pro-China/Putin love.

Those who don't suffer from mood swings due to drugs, bipolar & other conditions will find it hard keeping up with whom to bash & whom to praise. Last time I checked, the Mochas & Sassots & ThinkingPinoys that feed their confused minds are still on bashing the West (govt, media, human rights) mode. Those guys have not received the memo. Slow. Andanar is sleeping on his job.

My suggestion to die-hards is not to wait for clues from Idol's speeches. Flip-flops do not provide useful guidance.

Just think for yourself. Think of what is best for the Philippines. Key word is think. Then you won't bash the UN, US, EU, international media. Not that they are saints. But it is against Philippine interest to do so - we risk losing a lot (investment, aid, trade, tourism, jobs, defense) for the shallow pleasure of petting one man's ego and venting anger. High cost, high risk, no benefit.

Ignore the leader's mood swings. Better yet, correct him when he goes off course. Maybe he will listen to you." 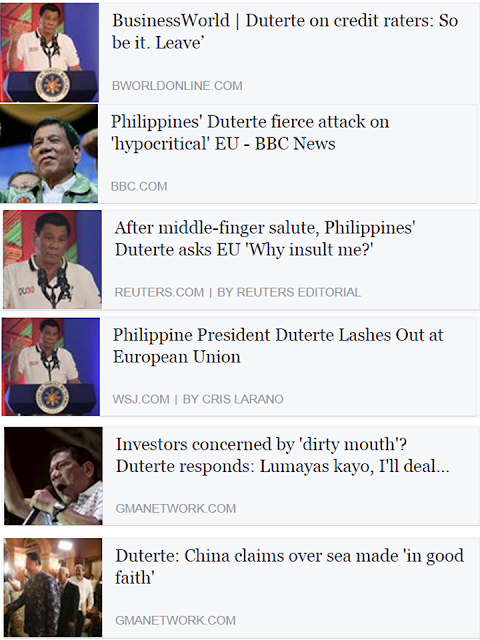 "EU is the Philippines' biggest foreign investor with an FDI stock of over 366 billion pesos.

EU invests almost $400B overseas each year. Philippines gets only 0.1% of that. Could easily double or triple with our market potential - IF we don't create the perception of risk by behaving like a rogue nation ruled by thugs instead of laws.

To make these numbers digestible: If the Philippines misses out on $3 billion investment in next 6 years, that means 60,000-120,000 fewer high-paying jobs, less income, less buying power, less taxes, less money for infrastructure. There are multiplier effects. Ignore at your own peril.

So "Pakyu EU". Close the lights on your way out." 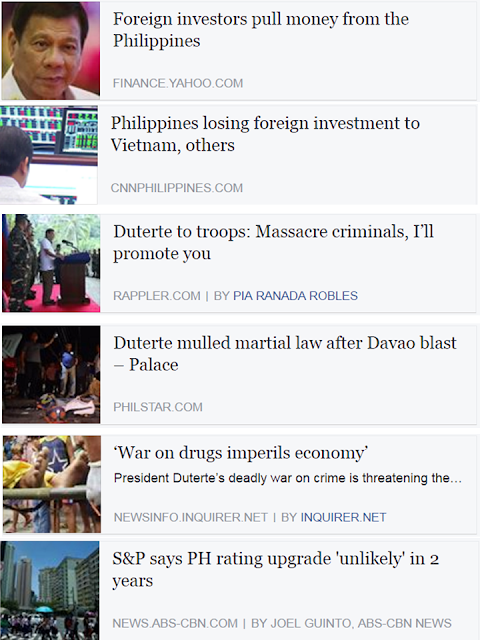