More on the huge, state-wide blackout for many hours in S. Australia last September 28. There was a storm, strong winds with gust at 100-120 kph, so the wind farms should produce more power, right? Wrong. Wind power suddenly went AWOL. Huge supply deficiency, plus some transmission towers were knocked down. And there was massive power blackouts. 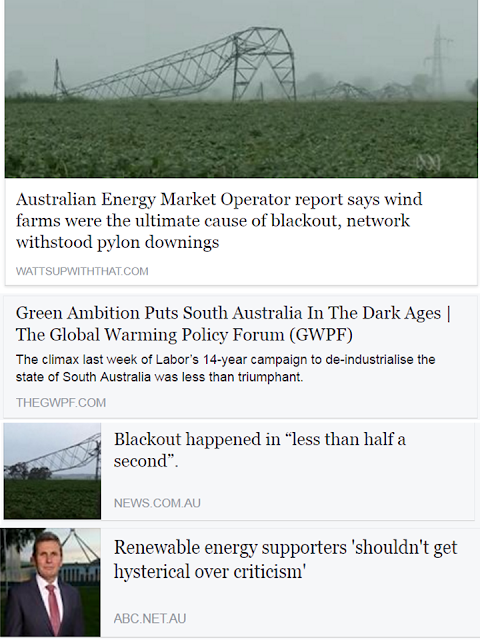 The wind farms shut down their turbines and locked the blades from spinning as there is danger that the blades might go out of control, the turbine can overheat/burn? 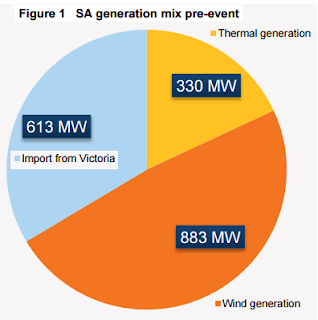 SA energy mix is 48% from wind, 34% energy import from Victoria, and 18% from thermal/gas power. Data from the AEMO Report, PRELIMINARYREPORT – BLACK SYSTEM EVENT IN SOUTH AUSTRALIA ON 28 SEPTEMBER 2016.

TEN South Australian wind farms have been ordered to limit generation in the wake of the disastrous statewide power blackout because the national electricity market operator has declared they have not performed properly.

The state’s biggest wind farm, at Snowtown, is among those which the Australian Energy Market Operator has targeted in its “management and analysis” of last Wednesday’s unprecedented power outage as it gradually restores the power network....

A dramatic, sudden loss of wind power generation was the root cause of South Australia’s state wide blackout last week... 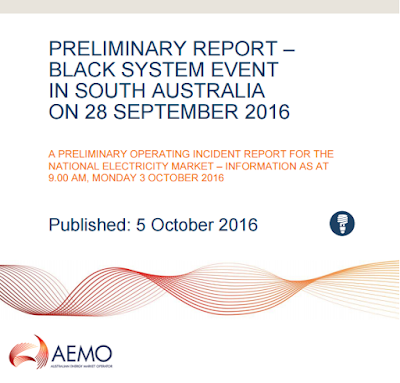 The AEMO preliminary report released yesterday does not state specifically if any wind generators locked; only that the power generated declined over a short period.

The "wind farm" operators ought to be able to tell if their turbines locked up. But they've said nothing … in a week.

As you note; wind power will drop to zero when the turbines lock up; something of which the State government and energy operators must have been aware; but totally unprepared in any event; transmission line failure to the wind generators OR the generators themselves.

South Australia's government hasn't yet announced a Royal Commission into the grid infrastructure (failure). They must do so IMNSHO because the grid structures failed catastrophically at wind speeds well below what they are supposed to survive. Such failures are indicative of a failure of competence or corruption.

The irony of wind power -- when there is a storm with strong winds, instead of wind turbines producing more electricity, they instead produce zero. The huge blackout in S. Australia occurred even before some transmission towers were knocked down. Wind power simply went AWOL.

From ABC, South Australian blackout: When the lights go out, it's a sign the electricity grid isn't working well, October 06, 2016:

"Wind presents two engineering problems when it is hooked up to a grid that was designed before it was viable.

First, it is intermittent so all of it has to be backed up by baseload power for those days when the wind does not blow.

Second, for an electricity network to function, demand and supply have to be kept near the perfect harmony of 50 cycles (50 hertz) every second of every day. If the frequency gets out of tune it trips the shutdown switch.

This electrical harmony is called synchronous supply, and thermal power is very good at delivering it. Wind power is asynchronous as its frequency fluctuates with the breeze, so it has to be stabilised by the give and take of other sources of demand and supply."

The endless reminder: Governments should step back from energy rationing and cronyism, telling picking winners and losers, mandating which energy sources should continue and expand and which ones should be curtailed, if not discontinued and killed.
-------------