Reposting another good insights from a friend, Bernard Ong, posted in his fb wall last Sunday. 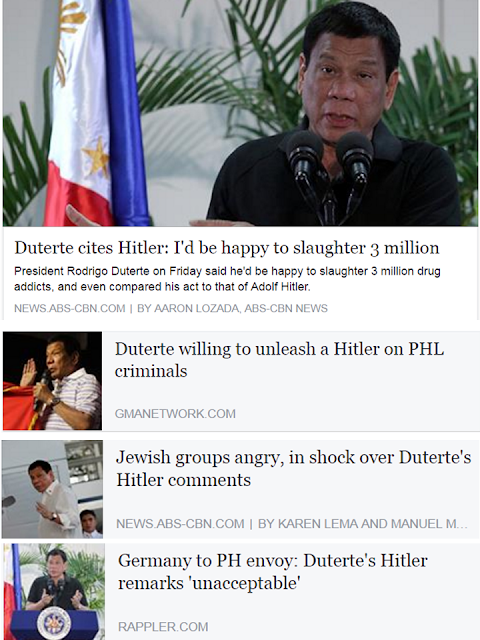 DUTERTE IS NOT (YET) HITLER

Apologies. Long post, driven by the gravity of the issue.
First let’s lay out what he said verbatim:

Sept 30: "Hitler massacred 3 million Jews. Now, there are 3 million drug addicts... I'd be happy to slaughter them… At least if Germany had Hitler, the Philippines would have (me). You know my victims, I would like to be, all criminals, to finish the problem of my country and save the next generation from perdition."

This is wrong on so many levels:

1. Wrong role model. Hitler of the Philippines
This is not the first time Duterte has referred to Hitler as a role model. In an article by Gerardo Sicat at Philstar updated on June 10, Sicat asked Duterte if he learned from Lee Kuan Yew. Duterte said “Yes… Also from Adolf Hitler” adding that a man who could command great obedience from citizens deserved study.

2. Wrong mindset. Willingness to murder millions
The main difference is Hitler had more time to accomplish his goal. To Hitler, the extermination of all Jews in Europe was the Final Solution to the Jewish Question. It was systematically implemented only in 1942 or more than 2 years after WW2 started in 1939. Concentration camps were built. Jews rounded up. Their assets confiscated – down to the gold in their dental fillings. Hitler had his warm-up phase in 1939-41.

Duterte is still on his warm-up phase. There are suspected 1000+ Death Squad Killings in Davao when he was mayor, 3000+ killings in the War on Drugs since he became president.

Duterte is willing to kill 3m drug addicts. But how many drug addicts does the Philippines even have? At different occasions since Duterte assumed office, he has thrown around 3 figures: 3m, 3.7m, and 4m. The last number of 4m was on Sept 23 when he said “3m plus 1m equals 4m” padding the number with 1m more addicts out of thin air.

Last Sept 19, 4 days before Duterte lied about extent of drug problem, Dangerous Drugs Board came out with the only official figure drug use (not addiction, as this includes casual users). The number is 1.8m as of 2015. Based on wrong data, the president may kill 1.2m innocent Filipinos. Not that the 1.8m are “guilty” of any law that merits capital punishment.

Had Duterte become president in 2004 in the ‘Hello Garci’ election, he would have aimed at killing 6.7m Filipinos, keeping up with Hitler’s 6m Jews.

4. Wrong Solution
Drug addiction is a health problem. The drug trade is a complex economic & law enforcement problem. Killing addicts or users does not solve the health problem. Duterte believes drug users – especially shabu – are beyond redemption. He just has to look at one of his Senate barkers – Manny Pacquiao who used all kinds of drugs before he became a champion – as living evidence that users / addicts can lead productive lives. Rehabilitation – with community & family support – is the key to solving the health issue.

Secretary Leoncio Evasco Jr. said “Nangomedya ra man sya ato (He was just joking).” This one is easy to dismiss. We are back to the joking excuse. His statement is officially useless as it violates a standing rule in the Cabinet – only Spokesman Ernesto Abella speaks for the president. Nothing of substance here. Just laugh & move on.

Then you have Teddy Boy Locsin, appointed Ambassador to the UN mainly because he could trash talk like Duterte, but in straight English.

He had a couple of old tweets that were made before Duterte’s self-reference to Hitler, even before he was appointed to the UN on Sept 17.

Aug 22: “I believe that the Drug Menace is so big it needs a FINAL SOLUTION like the Nazis adopted. That I believe. NO REHAB.”

Aug 24: “You may find this hard to believe but the Nazis were not all wrong, give or take killing millions of the wrong people. Keep an open mind.”

Final Solution, No Rehab is similar to Duterte’s “Shrunken brains. Beyond redemption. No human” view of addicts. His casual disregard for millions of lives & admiration for the Nazis mirrors Duterte’s own. The only difference is Locsin can say it within 140 characters of straight English while Duterte takes hours of rambling Tagalog-Bisaya-English. Same dangerous sick minds.

Oct 1: “The Philippines recognizes the deep significance of the Jewish experience especially their tragic and painful history. We do not wish to diminish the profound loss of 6 million Jews in the Holocaust - that deep midnight of their story as a people. The President's reference to the slaughter was an oblique deflection of the way he has been pictured as a mass murderer, a Hitler, a label he rejects.

He likewise draws an oblique conclusion, that while the Holocaust was an attempt to exterminate the future generations of Jews, the so-called "extra-judicial killings", wrongly attributed to him, will nevertheless result in the salvation of the next generation of Filipinos. He was just addressing the negative comparison that people made between him and Hitler. Hitler murdered 3 million innocent civilians whereas Duterte was referencing to his "willingness to kill" 3 million criminal drug dealers - to save the future of the next generation and the country. Those are two entirely different things.”

What’s wrong with this non-apology from the official apologist?

1. Since Duterte took power, nobody has been calling him Hitler.
His misguided followers have falsely hailed him as a Lee Kuan Yew. On totality, he is closer to Hugo Chavez. He accurately likened himself to Idi Amin: “I don’t care… I will retire with the reputation of Idi Amin… My paradigm is not like here in Manila … In Mindanao, people resort to killings. Why will I change what I know? It is serving the country well.”

2. It makes the false “Hitler has done that” while “Duterte is just willing to” distinction.
As laid out earlier, Hitler had his warm-up phase before he killed 6M Jews. The DDS experience (1000+ killings) and first 3 months EJKs (3000+ killings) shows Duterte is more than an all-talk, no-action politician. Like Hitler, he is just warming up. At what point is a man considered a mass murderer. 3,000 killings? 30,000? Or should we wait for the 3m killings to happen?
Put another way, if a man linked to a few thousand murders says “I’d be happy to murder a few million”, should society just shrug it off - because he has not done it yet, but only showed willingness to do so?

3. It protests “the way he has been pictured as a mass murderer”
But then celebrates mass murder through “the so-called "extra-judicial killings", wrongly attributed to him, will nevertheless result in the salvation of the next generation of Filipinos.”
This shows the state approves of EJKs – at minimum tacitly – as a justified solution to an overhyped drug pandemic.

4. It is an outright lie.
If Duterte "was just addressing the negative comparison that people made between him and Hitler", he should have said this instead: Hitler killed 6m Jews. I will not do the same in my country. We have 1.8m addicts. I will help them become productive citizens of the Republic. I am not Hitler.

To address a negative comparison by giving statements that reinforce that comparison is adding fuel to the fire.
x x x x x
Abella’s non-apology fooled no one except the converted so he issued another one.

Oct 1: “The Palace deplores the Hitler allusion of President Duterte’s antidrug war as another crude attempt to vilify the President in the eyes of the world. It is a matter of record that the reference to Hitler did not originate from the President. Days before the May presidential election, the President’s opponents introduced this issue to gain political mileage. It did not work…

He likewise draws an oblique conclusion, that while the Holocaust was an attempt to exterminate the future generations of Jews, drug-related killings as a result of legitimate police operations (as opposed to so-called extrajudicial killings of criminals, wrongly attributed to him, as these are not state-sanctioned) will nevertheless result in the salvation of the next generation of Filipinos.”

Here he does two things:

1. He tries to deflect blame to former President Aquino who warned on May 7 that Duterte’s rising popularity was akin to that of Hitler in the 1920s and 1930s. Aquino said “I hope we learn the lessons of history. We should remember how Hitler came to power.”

The issue is mass murder. If someone – e.g. Aquino – points out the threat, the correct approach is to dispel it by not talking & acting like a mass murderer.

2. Abella belatedly realized his Freudian slip defending EJKs and tries to correct his error.
The revised paragraph that highlights “legitimate police operations” is itself questionable. There have been too many reports of those who surrender getting killed, handcuffed suspects shot inside police vehicles & stations, faked police reports that don’t conform match CCTV or eyewitness testimonies.
The problem with Abella & the other apologists is that they presume people don’t understand English (or Tagalog or Bisaya for that matter), cannot understand the context within which words are spoken, don’t review video references, cannot see bigger patterns from past events.

Basically they would rather tell us that we are dumb, rather than tell their master that he is wrong. Duterte will not reinvent himself into the president this nation needs & deserves if his advisers are all yes-men who see no wrong.

The problem with his apologists is that they fail to do what apologists do – apologize.
On behalf of other like-minded Filipinos, I apologize to the Jews, the Germans, the Israelis, the international community. We are not all deranged, bloodthirsty savages here.
--------------