A few months ago, the Australian Energy Market Operator (AEMO) warned of blackouts by around 2020 in S. Australia because of its rising dependence on wind power. Well, it already happened. Widespread and prolonged "Earth Hour" in S. Australia last September 28, 2016. 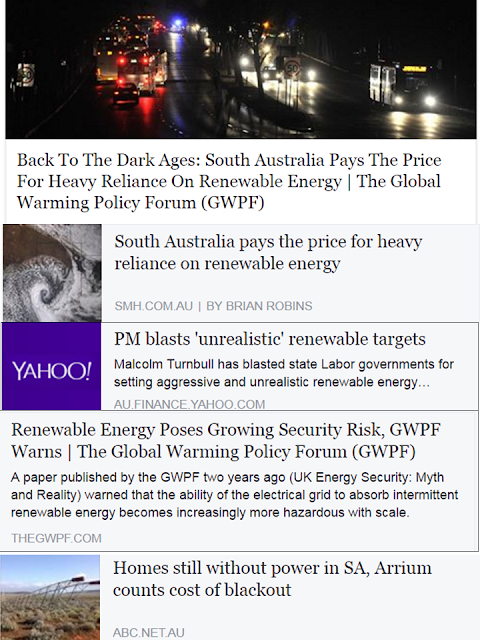 An Australian engineer friend, Bernd Felsche, made this comment when I posted this issue in my fb wall last October 2:


"Note that the renewables crony capitalists and their sheep will argue that the failure wasn't due to wind power which is only true in the context of the failures; the collapse of power transmission lines due to wind.

However, an electrical power grid is usually able to "recover" within minutes to deliver whatever available power to priority consumers. And there was the potential of significant capacity via the Heywood connector to coal-powered generation in Victoria. However; that connector "tripped" due to the surge in demand that it "saw".

Wind power failed to provide to the grid because there was insufficient rotating inertia for them to synchronise. Reports indicate that the gas-fired power station at Pelican Point was started from cold to provide that inertia; which would account for the hours of delay before some power was restored. Wind power could not be utilised until it could synchronise to the frequency and phase of a much larger generator.

It seems that the entire South Australian electricity supply grid has been mismanaged for decades.

The transmission towers that collapsed apparently did so in winds that they should have withstood. Nearby wind turbines did not even shut down due to excessive winds (sustained above 90 km/h), so wind speeds could at first glance not have exceeded the design wind speeds for the towers. Let's hope that the evidence isn't destroyed before there's an official inquiry.

Adding to that, it is well known that wind power requires a minimum of 90% of spinning reserve. That reserve was substantially provided by the interconnectors to Victoria. The loss of the Heywood connector might have been averted by faster circuit protection to shed non-essential loads in the Adelaide area.

The transmission map (see https://www.electranet.com.au/what.../solutions/network-map/ ) indicates that there are 4 lesser (132/66 kV) power transmission lines parallel to the main 275kV one in the Blyth/Melrose region where most, if not all of the tower collapses were reported. While those resources present some potential for re-routing power, it quickly gets complicated and expensive. That Northern transmission line exists originally to connect to the now demolished (in the week prior to the blackout) coal-fired power stations at the Northern end of the Gulf.

South Australia's power generating capacity is not reliable, lacking sufficient spinning reserve to fill the loss of capacity in wind power generation. The grid is neither robust nor resilient.

No lessons have been learnt from the experience in Germany where the mixing of unreliable, unpredictable power generation with conventional power generation on the grid makes the reliable generating capacity unstable.

South Australia has experienced what it's like to power a State on virtue signals alone." 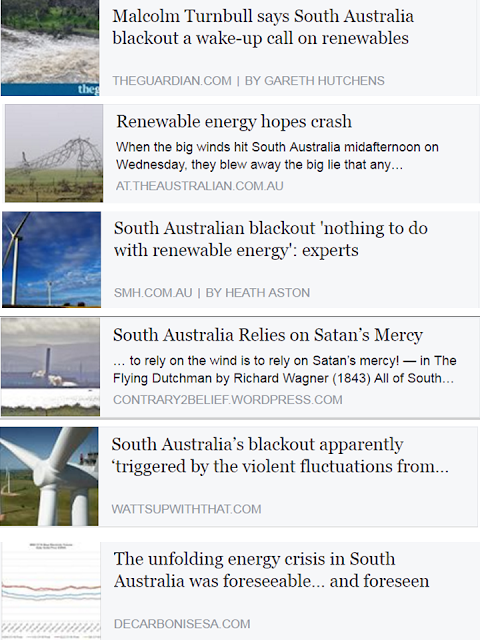 From some news reports:

"So we end up not achieving our emissions targets or, if we do, we do it at even higher costs than is necessary and in the meantime there could even be a risk of blackouts," report author Tony Wood said.

In the spotlight is a single winter's night in South Australia, when the wholesale price leapt from a year-long average of $60 a megawatt hour to $9,000 MWh.

"Loss of available power from transmissions lines feeding the region from other states coupled with South Australia’s ill-considered climate change energy policy of forced shutdown of the states operating coal plants to promote heavy use of renewable energy created this latest power debacle. 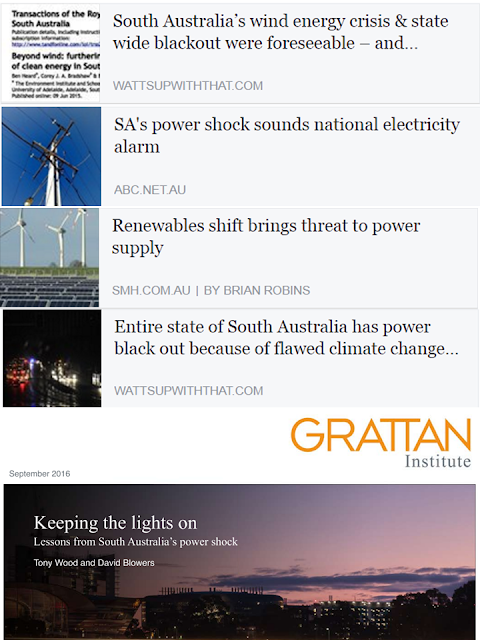 From the Grattan report, 40 pages long:

The increased penetration of renewables does not just have potential implications for the NEM in terms of price signals for new investment. It can also have consequences for the security and stability of the electricity system.

The frequency at which the electricity system operates needs to stay balanced. Balance is easier to do with fossil fuel and hydro power stations than with generation such as wind and solar PV. This is because wind and solar do not operate at the same frequency as the electricity system. Wind turbines, for example, generally rotate according to the speed of the wind, rather than the frequency of the system. On this basis, wind and solar are described as providing asynchronous generation." http://grattan.edu.au/.../09/877-Keeping-the-lights-on.pdf

Governments should stop politicizing and intervening too much on energy policies.
---------------