BWorld 82, No FIT for geothermal and other renewables, please

* This is my article in BusinessWorld last September 01, 2016

Expensive electricity via government price guarantee for 20 years is wrong. Business is about risks and returns, capitalism is about corporate expansion and bankruptcy, so there is no such thing as guaranteed price nor assured profit for many years in a competitive economy. Only politics and cronyism will try to negate the nature of competition and business reward and punishment.

Last Aug. 17, 2016, it was reported here in BusinessWorld that Geothermal technologies sought to be included in FiT program.

“The National Geothermal Association of the Philippines (NGAP) is asking the government to include emerging geothermal technologies in the feed-in-tariff (FiT) program to address the cost and risks encountered by developers,” the report said.

This is wrong. Other renewables should also not aspire for FiT system. Granting FiT for intermittent renewables like wind and solar for 20 years was already wrong because it exposed consumers to high and rising electricity prices and the grid to volatile power fluctuations within minutes, among others.

The association was correct in calling that “On the policy front, NGAP calls for expedited regulatory action and permit approvals, as well as assurance of peace and order in some of the more remote prospects.”

Let there be less government interventions and bureaucracies for businesses.

Another reason why granting FiT to geothermal and other renewables is wrong is because energy technologies keep improving and hence, their costs keep falling. So why give an assured, guaranteed high price for technologies that evolve towards falling price through time?

The numbers below on levelized cost of electricity (LCoE) will support the above statement. LCoE is not a perfect measurement of the overall cost per technology but it is a good dimension of the overall competitiveness of different power generation technologies.

b. Capacity factor means the ratio of actual electricity output over rated or installed capacity.

d. CCS means carbon capture and storage, it is made mandatory by the US government for all new coal plants and it pushes the capex to high levels, making coal power in the US more costly (see table). 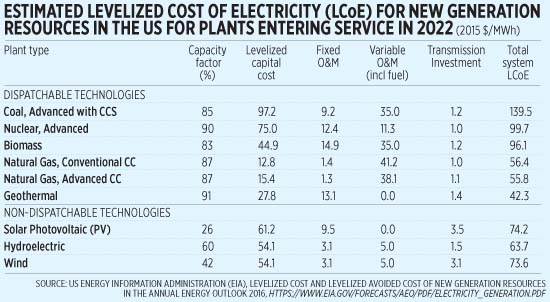 On another note, I wrote in my column last Aug. 17, 2016, Brownouts, coal power and the electricity market, “can we expect PEMC to be more independent, more candid, in assessing the harm, actual and potential, of more REs in WESM and grid stability?... no. The DoE cannot contradict itself and say that REs are necessary and that REs are dangerous to the customers’ pockets and the stability of the national grid.”

The Philippine Electricity Market Corporation (PEMC) through Atty. Phillip C. Adviento replied last Aug. 23, 2016. They said that PEMC “acts only as the Market Operator responsible for the governance and operations of the WESM. The function of maintaining the security, reliability and integrity of the power grid is lodged with the System Operator. Against this context, it is grossly inaccurate to claim that PEMC is expected to study the impact of influx of RE resources in the grid.”

Good point, I recognize that strict distinction between a market operator (of WESM) and system operator (of the national grid). Still, PEMC has the data, it generates that data, of the intermittency per hour and even per minute, of the overall low capacity factor, of the renewables that enter the WESM.

PEMC added that it is “not a government-controlled corporation.”

However, it IS a private but government-controlled corporation. The Governance Commission for GOCCs (GCG) itself said this at the Senate Committee hearing last Jan. 26, 2016, then chaired by former Senator Serge Osmeña III.

Government needs to step back from its intervention in the sector. It should reduce the number of permits that firms need to secure so that they can put up new power plants quickly. The government should also cut or abolish the system of guaranteed price for decades for favored renewables, reduce the taxes and fees imposed on energy companies, and the electricity costs paid by the customers.