This means that even if a person has no work, or work a little then complain a lot, or simply does not want to work, he/she and family members should be entitled to all the above services to be provided by the government for free or at heavily subsidized rate. Because life is a right, and the main purpose of government is to ensure that all people, young and old, men and women, rich and poor, should have quality life in this planet.

That is pure populism. The popular and majority desire of the public. And that is dangerous. When majority of the people simply want more rights and entitlements, and they do not think that they also have responsibilities and obligations to finance and sustain those high expectations of rights and entitlements, then society can descend to socialism and large-scale confiscation of the income and savings of people who work harder and more efficiently than the rest. The result is not economic and political freedom but politics of envy and large-scale coercion and persecution of the minority who do not agree with such social arrangement.

This is a very timely subject as many countries and economies worldwide are plunging into heavy public debt problems as a result of decades upon decades of giving away so many subsidies and freebies to their citizens. Even if local revenues are not sufficient, public spending for welfare and other populist subsidy programs kept spiraling, and the gap between low revenues and high spending is financed by endless borrowings, year in and year out.

So the Economic Freedom Network (EFN) Asia (www.efnasia.org) will take this deep and complex issue in its annual conference this year to be held in Hong Kong from November 6 to 8, 2012. The theme of this big activity is How Welfare Populism Destroys Prosperity: The Populist Challenge to Economic Freedom.

The main sponsors of this important event are the Friedrich Naumann Foundation for Liberty (FNF, www.fnst.org) and the Lion Rock Institute (LRI, www.lionrockinstitute.org), a Hong Kong-based free market think tank.

The conference was premised on this concept:


... Populism is more emotional than factual, it is more hopeful than real. Populist politicians use fear, uncertainty, overwhelming complications, and anti-establishment attitude to generate mass appeal, and ultimately, to get into power.

In Asia... political leaders who want to challenge the status quo present themselves as champions of the masses.  They employ populism primarily as a political strategy to gain popular vote by offering quick fixes and by applying simple solutions to complex problems. Through deficit spending and subsidies they shower the voters with benefits. Ultimately this creates unsustainable solutions. It is leaving the people far worse off than before because ultimately someone has to pay for these policies... Populist policies are reducing the freedom to trade, tighten economic regulations, and increase the size of government...

Among the speakers in the event are: 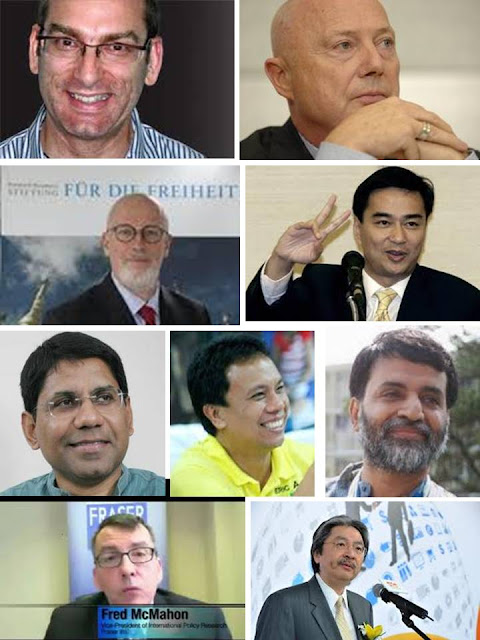 I was invited by the organizers to become one of the group hosts in the 5 Groups where participants will discuss "What can advocates of free markets do to counter populism?". I immediately agreed so I will be going to HK this November.

I have discussed below in Fat-Free Econ 23: Penang Workshop on Markets in Healthcare about the importance of linking always, rights and responsibilities, entitlements and obligations. For me this is one effective way by which believers of free market and individual freedom, rule of law and property rights protection, can combat populism and their usual fiscal agenda of spend-spend-spend, borrow-borrow-borrow, tax-tax-tax philosophy.

Will give more updates here as the conference will draw nearer.

* A minor problem: my passport will expire in mid-April 2013, but since one cannot travel if the passport will expire within six months, a Philippine passport with five years life has a real life of only four and half  (4 1/2) years, I will have to get a new passport. Which means I will have to go through another episode of DFA bureaucracy sooner than necessary, take a half day off (at least) from work and pay P950 (regular 15 working days processing) or P1,250 ("express" 7 working days). In many countries, a passport is valid for 10 years, not just five as in the Philippines. Short passport life, more payment to the bureaucracy, they help reduce individual freedom in global mobility.
------

We can add another populist stand to your list in the opening: gas prices should be cheap and government controlled (or kung puwede nga lang, siguro gusto nila, libre na rin haha).

Here's a suggestion for your future entries, in case you get the time:

What do you think of the recent findings of the committee led by Prof. Diokno that there's no overpricing?

And how does it compare to leftists' "methodologies"? According to left-leaning people like Teddy Casino, Arnold Padilla (whose blog I'll put a link to in a while), and groups like Ibon Foundation (I don't have a recent link to their version for now, but if you come across one, you might want to post it on your blog and react), they say they have their own "studies" indicating overpricing on the part of oil firms. Have you come across such studies and what do you think?

As promised, here is a sample leftist blog. I was expecting an entry of arguments on facts. Instead, half of it is basically ranting about how economists like Dr. Peter Lee U (of UA&P, who led the 2008 version of the DOE review), Professors Diokno and Abola are icons of "neoliberalism" and belong to pro-free market schools. See for yourself what the activist has to say.

The leftists do have some interesting things to say, like for example, they're really interested to check the oil firms' supply contracts and check the costs of their imports. For example, they think that if oil imports cost 25 pesos per liter, then the oil companies should explain why they add 20 pesos to sell it for 45 pesos per liter. But if that's the logic we'll use, then what's the "right" "patong" and right profit?

Same case for cumulative profits. They think that oil firms earn billions of profit every year. Therefore, there is overpricing. Again, what's the "right" profit?

That's why I prefer methods such as checking Returns on Equity (ROE) and those other stuff stated by the various review committees of Alindada (2005), Lee U (2008) and Diokno (2012). Walang subjectivity. What do you think?

Admittedly, some free/deregulated markets, such as the oil firms, remain oligopolistic to this day. Mukhang nagsasabwatan (but only because practically all of them import from the same source) and oil is indeed expensive nowadays. But I guess we'll just have to adjust to it through ways such as managing our oil consumption and maybe looking at alternative sources (e.g. Does Malampaya and Benham Rise have useful oil?).

Anyway, sorry for digressing. Going back a bit to your entry, I think the main job of government with respect to the poor is to "help them help themselves". Kung tamad talaga, then hindi na dapat. What do you think?

But still, most politicians instead "help make the poor dependent on us so they will vote for us". hehe.

i think its clear to everyone that all firms earn profits.

the question must be "whats the problem with that"?

once you answer that, next answer "what can be done about it".

the answer to the first one is complex enough. the mere existence of profit is not enough -- like i said, all firms earn profits.

even IF we can agree that there is a good case for "its a problem", the second one is magnitudes more difficult.

the reason is obvious if you think about it.

if you passport expires while you are in the country, it would be impossible to fly. if your country has embassies in each destination, or ties with the host country, then it matters less. the philippines however doesnt have that.