There is a good article on the global and Asia Pacific pharma market yesterday by Dr. Tej Deol, The APAC pharma markets; connecting the dots by Jan-Willem Eleveld, Vice President Consulting & Services IMS Health. It's about a presentation by Mr. Eleveld, IMS' VP, last October this year.

Dr. Deol showed 10 slides from Mr. Eleveld's presentation. For this paper, I will use only 4 of them and give my own discussion about them. Readers can check Dr. Deol's paper at the link given above. To see larger image of the graphs and illustration below, just click on the image. 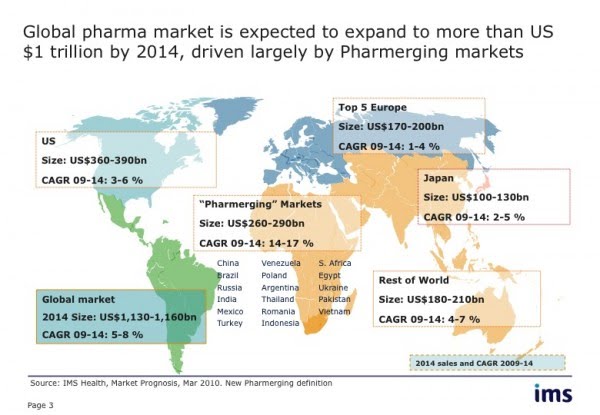 By 2014, the global pharma market is projected by the IMS to reach some US$ 1.2 trillion, from an estimated $850 billion this year. Look at the "Pharmerging" markets, projected to have $260 to $290 billion by 2014. The list of those "pharmerging" economies does not include the Philippines. Thailand, Indonesia and Vietnam though were included.

The Asia-Pacific region excluding Japan, is projected to have 17 percent of global pharma sales by 2014, up from only 8 percent in 2005 to 11 percent this year. Japan will keep its estimated 13 percent of global share up to 2014. 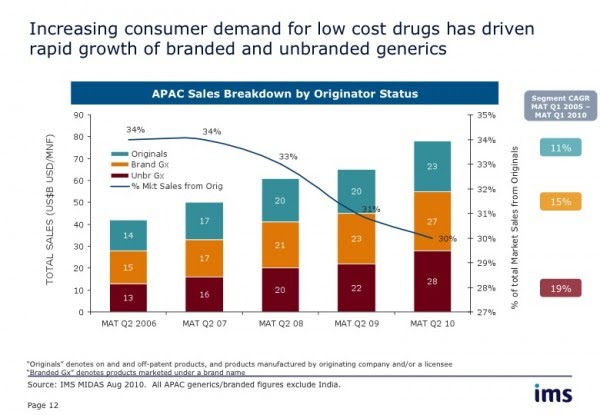 In terms of annual growth rate, while the originals experienced 11 percent growth from 2006 to 2010, branded generics grew by 15 percent and unbranded generics grew by 19 percent over the same period. At this rate, even innovator companies will consider moving into generics manufacturing as well because of the huge business potential due to high consumer demand for cheaper generic drugs. 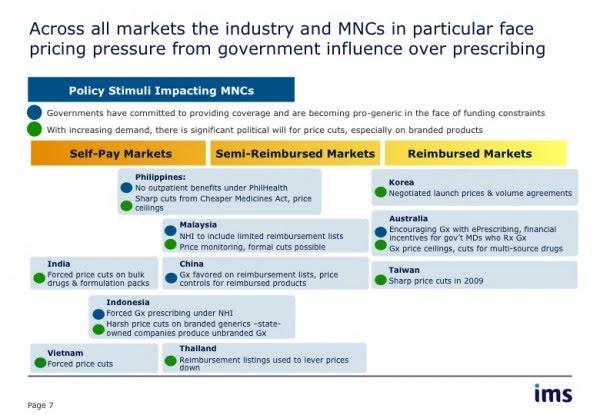 See the list of Asian countries with government-mandated price regulation, which is mere euphemism for what it really is -- price control. They include India, Vietnam, Indonesia, Philippines and China. The degree or mechanisms of price control differ among these countries though. Malaysia has no price control yet, but the possibility of the policy being imposed there remains. And Thailand has no price control policy, but it has imposed compulsory licensing (CL), which has a similar negative effect on innovator companies. 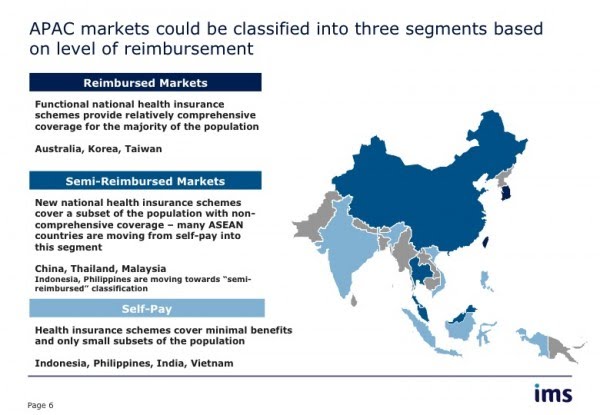 This chart shows a new trend in some Asian countries -- the movement from "self-pay" to "semi-reimbursed" markets. Wider government health insurance coverage is projected to make this possible.

Healthcare and health insurance should take a cue from the pharma sector. There is no government pharma company except in Thailand, but the competition among many private pharma companies -- innovators, branded generics, non-branded generics -- result in lower prices of drugs as more drugs at declining prices are being introduced. It is actually government taxation of medicines -- like import tax (5 percent) and value added tax (VAT, 12 percent) as in the case of the Philippines -- that contributes to expensive medicines.
Posted by Bienvenido Oplas Jr at 5:55 PM