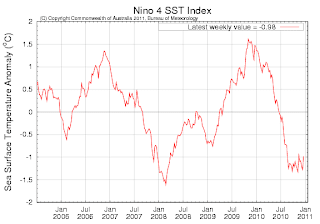 The severe winter and cold snap hitting Northern Hemisphere since last month also has its counterpart in Asia. Below are some news reports that I gathered this month. The sea surface temperature (SST) anomaly in Nino region 4, the region of equatorial Pacific Ocean closest to East Asia, remains in the -1.0 C colder than normal for several months now as shown in this graph, as of December 26, 2010. Source is http://www.bom.gov.au/climate/enso/indices.shtml

Beijing’s temperature slumped to below minus 10 degrees Celsius Wednesday morning, the lowest in a decade reported at the same period of the year, amid a cold snap hitting half of China.

An observatory in the southern suburbs of Beijing indicated the temperature was minus 10.9 degrees Celsius at 5 a.m., a record low in 10 years, the city’s weather bureau said in a press release.

Meanwhile, the temperature in the mountainous Yanqing District on the city’s northern outskirts was minus 16.1 degrees Celsius.

Severe cold gripped the Japanese archipelago Thursday, with temperatures in some locations dropping to the lowest recorded this winter, the Japan Meteorological Agency said. The mercury fell to as low as 21.7 C below zero in Kitami, Hokkaido, the record low in the city for the month of December, the agency said. The first snow of the season was observed in some cities, including Mito, Ibaraki Prefecture, Shimonoseki, Yamaguchi Prefecture, as well as Fukuoka, Saga, Nagasaki and Oita.

A cold spell gripped the nation a day before Christmas on Friday, the December temperature falling to the lowest level in three decades.

As of Friday morning, the mercury dropped to minus 14.4 degrees Celsius in Seoul, falling by more than 10 degrees from the previous day, the weather agency here said.

The temperature will remain below zero the whole day and through Christmas in most regions, with snow expected near the country’s west coast, the Korea Meteorological Administration said.... 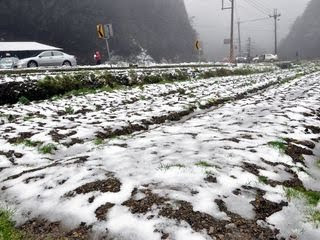 First snow of the year falls in central Taiwan
December 16, 2010

Taipei, Dec. 16 (CNA) Taiwan saw its first snowfall of the year Thursday at Siyuan Yakou in the central region, where the Chungyang Mountain Range joins the Xueshan Range.

Snow began falling around 2 a.m. Thursday and by 4 p.m. three to six centimeters had accumulated in the 1,948-meter mountain pass, said Jungle Chen, Dulishan branch chief of the Directorate General of Highways (DGH)....

It's winter woollies weather, with the mercury expected to drop to 14 degrees Celsius this morning, weathermen say. A winter monsoon will be bringing lower temperatures to Hong Kong over the next few days, the observatory said.

The minimum temperature is also forecast to be 14 degrees tomorrow, before rising slightly to 16 degrees on Friday and Saturday. It will be a couple of degrees lower in the New Territories - Ta Kwu Ling is expected to experience a chilly 11 degrees,,,.

The weather will turn slightly warmer in the next two days as a cold snap weakens in the northern region, before another cold wave turns the weather chilly again from December 23 to 26. More frost is forecast in both mountainous and lowland areas.

Places like the tourist town of Sa Pa, Sin Ho Commune in Lai Chau Province, and Mau Son Mountain in Lang Son Province are likely to get snow again, according to the Central Hydrometeorology Forecasting Center....

CHIANG MAI, Dec 27 - Thailand's northern province of Chiang Mai has declared all its 25 districts as a disaster zone due to the cold snap affecting the region, according to to provincial disaster response services director Prajon Pratsakul.

The Chiang Mai Disaster Prevention and Mitigation Office head said temperatures dropped below 15 degrees Celcius for over three days, which he said is an indicator that the whole province will become colder. The provincial seat is the warmest spot where the temperature has been 14 degrees Celcius.... 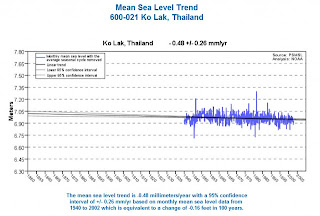 Meanwhile, here is one study on sea level in Thailand. The trend is declining, not increasing, by 0.26 to 0.48 mm per year. Or 48 mm (4.8 cm) per century, which is negligible. Click on the graph to see a bigger image. Graph source is http://stevengoddard.wordpress.com/2010/12/27/co2-creates-salt-water/

Even as north India shudders under harsh winter conditions, heavy fog delayed 31 flights in Delhi on Monday morning. Sunday was also Delhi's coldest day of this season - the minimum temp was 7 degrees....

We have cloudy sky here in Metro Manila and surrounding provinces everyday, except yesterday. Some rains too, a slightly wet Christmas last December 25-26. Baguio, the highest and coldest city in the Philippines, is experiencing colder than normal temperature.

If there is prolonged drought and bad El Nino, it's due to man-made warming, so governments should impose more environmental regulations, more energy taxation, and create more climate bureaucracies.

If there is prolonged rains and cold snap, bad La Nina, it's due to man-made warming, so governments should impose more environmental regulations, more energy taxation, and create more climate bureaucracies.

Yeah, right.
Posted by Bienvenido Oplas Jr at 10:57 AM

Very helpful collection, Nonoy! Here in the West, whenever you point to the freezing conditions outside, the Warmists would reply "This is just local cold; the globe is warming" but your collection makes it clear that the entire Northern hemispehere is affected. Which should be obvious when one looks at the global SST.

Thanks Dirk H. I notice that there is NO Asian blogger who regularly fights the warming fanatics. Most or all of them are from North America, Europe or Australia. Thus, the regional conditions are not highlighted. I hope to continue this series in future blog articles.

Keep it up Nonoy!
Have you thought about contacting the guys at WUWT? I'm sure they'd be happy to give your site more exposure - we need a truly global sceptic community, not just one from the US/Europe/Australasia.
Now remember, make sure you keep your jumper and scarf on - this 'Global Warming' can get really chilly ;)