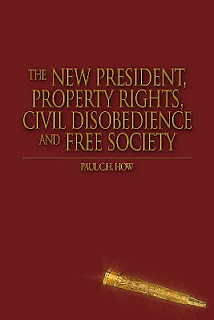 This is the book, authored by Paul How. Paul blogs at http://colorfulrag.blogspot.com. He introduced the book in his article, Government and Peace and wrote,

Contrary to common thinking, social order is not brought about by government. Even the justness of government’s acts, is determined by the degree by which property rights are upheld. No Constitution, no legislation can be considered just without recognizing property rights, of which the basic principle is that rules are dictated by respective property owners.

From this comes liability of property rights violators, who are sanctioned not for vengeance but for prevention of future violations, the terms of which can be agreed upon by the parties involved. This is what ‘rule of law,’ the invoking of which is done even by those who may support limited government, is ultimately about.

Such a system may not eliminate coercion altogether, but at least, the most significant entity by which coercion is institutionalized, the government, will have been done for. It is only in the absence of institutionalized coercion that peace can prevail.

For a copy of the book in the picture above, which I wrote in 2009, go to Google Books. Warning: some far out stuff! Far out! 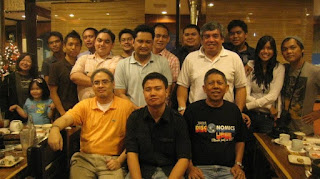 Paul is seated in the middle, beside me. He and Francis, seated left, are the key leaders of a new but informal group, "Filipino Libertarians". Picture taken last December 19. I was given the privilege of being seated in the front perhaps because I'm the most senior of them all. :-) The guys at the back are the other young libertarians in this country.

I will write about this group in another blog entry.

Meanwhile, hats off to Paul for this new project.
Posted by Bienvenido Oplas Jr at 6:00 PM