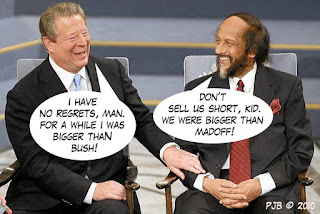 Al Gore and Rajendra Pachauri, the IPCC Chairman, are the two most important global personalities in the anthropogenic global warming (AGW) or simply "man-made warming" drama. And not surprisingly, not one of them is a scientist. Al Gore is a politician, Pachauri is an economist from India. Yeah, Pachy is right, they were several times bigger than Madoff.

The pictures and cartoons here are taken from various sources in the web like cartoonstock.com, not one of which I originally created. 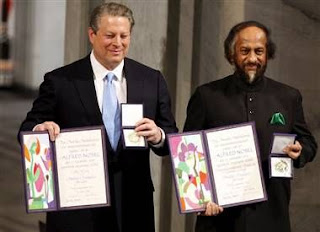 Three years ago, December 10, 2007, Al Gore and the IPCC, represented by Pachauri, were the recipients of the Nobel Peace Prize (NPP) award for their effort to "save the planet". The IPCC 4th Assessment Report (AR 4) was released in November 2007 or a month before the NPP awarding. Note also that the IPCC Summary for Policy Makers (SPM) was released in February 2007. The summary and recommendations were released 9 months ahead of the main report! The (political) conclusions were released ahead of the scientific study! That's indeed more political science than climate science. 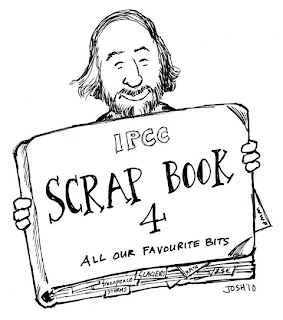 Thus, this cartoon describes the political science nature of AR4, calling it "scrap book 4". Of course, it's not exactly a "scrap book". It's more of a political science book with climate data and projections. AR 4 has reports on 3 working groups (WGs). WG1 is about the physical science of AGW. WGs 2 and 3 are about mitigation and adaptation. So two-third of AR4 is about policies and politics. 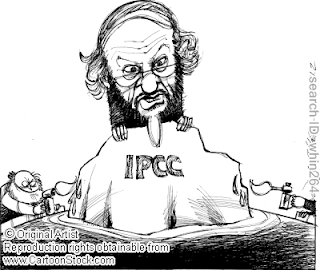 Here, Pachy is either overseeing a "man-made warming" project. Or "skeptical" scientists are melting the IPCC man-made warming drama and hypothesis. These cartoonists really have good sense of humor. 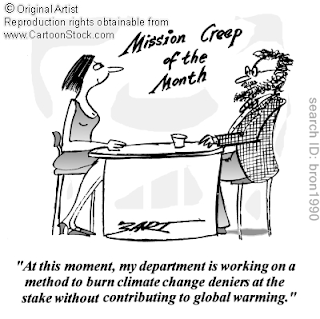 Another cartoon, depicting IPCC and Pachy intolerance to skeptical reports and scientists who question the AGW hypothesis. The term "skeptics" refer only to non belief that past warming of the planet was due to humanity's carbon emission. Skeptical scientists and researchers admit that there was indeed global warming that happened in the past century, the same way that global cooling also happened about two centuries ago.

This is about the "Himalayangate" scandal. IPCC AR4 has one section there predicting that the glacier in the Himalayas -- where Mt. Everest is -- will melt totally by 2035. It was later discovered that the source of that claim is not from any peer-reviewed study or journal paper, but from a World Wildlife Fund (WWF) report. WWF is not a scientific body, it is an activist and advocacy NGO. When it was discovered prior to the Copenhagen COP 15 meeting last year, Pachauri denied that it was a scandal and stood by the AR4 report. It was only a few months after the Copenhagen meeting that Pachy admitted the mistake. 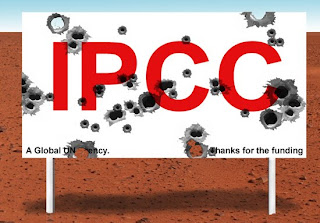 The "Himalayangate" scandal was only one of about 129 other "gates" scandals in AR4. See them here, http://notrickszone.com/2010/12/07/climate-science-scandals-list-of-gates-balloons-to-129/. Hence, this cartoon of the IPCC being riddled with bullets and scandals. 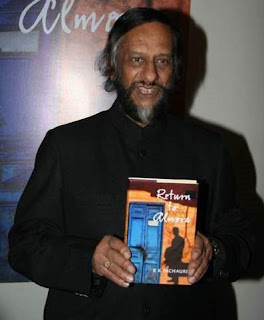 Pachy the top climate bureaucrat in the world, has one intellectual output. He has written a book, "Return to Almora" -- "a 'smutty' romance novel, laced with steamy sex, lots of sex. Oh, and Shirley MacLaine." See the discussion about his book, http://wattsupwiththat.com/2010/01/30/ipcc-now-in-bizzaroland-pachauri-releases-smutty-romance-novel/. 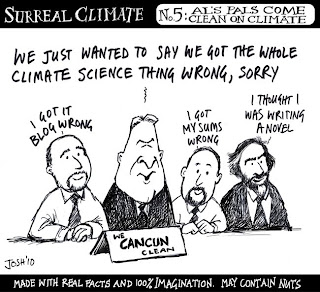 Finally, the IPCC and the recently-concluded COP 16 meeting in Cancun, Mexico. As endless global meetings and negotiations for more and deeper carbon emission cuts to "save the planet" go nowhere, and as severe cold hammer many countries in the Northern Hemisphere, even reaching Cancun with record December lows, the cartoon depicts an apologetic IPCC team. Of course it's a joke. IPCC team do not and will not apologize. They even threatened and publicly announced that the next report, AR 5 that will come out in 3 to 4 years, will be more alarmist in its findings of "accelerated warming". Again, the conclusions have been made 3 to 4 years ahead of the actual report.

Happy weekend.
Posted by Bienvenido Oplas Jr at 9:04 AM