A more appropriate title of this paper would be "Fiscal, corporate and personal irresponsibility: Ireland". But for continuity purposes, I titled it as such to provide a sequel to my earlier posting, Fiscal irresponsibility 1: Ireland last November 25, 2010. 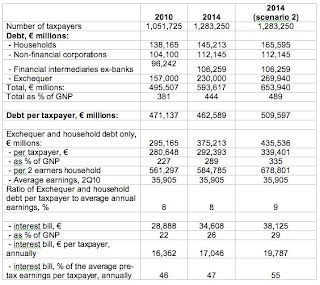 Dr. Constantin Gurdjiev's article yesterday, Debt, debt, debt... for Irish taxpayers, provided really good data. The author separated household or personal debt, with non-financial corporate debt, financial sector debt, and government/Exchequer debt, and it is very useful. Click this table for larger image. Please note also that the "Debt per taxpayer, Euro millions" should refer only to Euros, not million Euros, because these are expressed on a per capita basis. The author recognized the mistake, a minor one.

Of course some people are net lenders, not net debtors. These are the people who put their money and savings in the banks, the banks lent out the money to others in the form of housing loan, car loan, credit card debt, etc.

But if corporate debt are not included, only the household and government debt, the per taxpayer debt this year is only Euro 280,648, not Euro 471,000+.

Households, corporations and government living off on debt is not right. Only the rule of law -- that those debts will have to be paid somehow, sometime -- could be the saving grace of Ireland and other debt-ridden countries. But somehow, sometime in the near future, there will be a breakdown of the rule of law. Not all lenders will be paid and not all debtors can pay. And that is where other social and economic problems will surface.

In the recent US financial and housing crisis, I do not remember reading anyone from the collapsed banks like Lehman Brothers, ever went to jail. What happened to the rule of law in America?
Posted by Bienvenido Oplas Jr at 5:06 PM