This is the same title of the powerpoint presentation I gave last November 24 at the Rotary Club of Makati Urdaneta (RI District 3830), 36 powerpoint slides.

Among the pictures I showed in my paper, images use by the alarmists for their climate blackmail campaigns, is this one -- the Earth is burning! That our planet simply does not have a fever, it is burning with terrible warming, caused by humanity and their cars, their air-con houses, malls and offices; in short, caused by economic modernization. 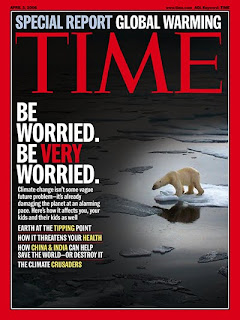 Another alarmist picture, a news headline, is this one by TIME magazine itself. Polar ice is melting fast due to man-made warming, the polar bears are endangered, so be worried. Now with severe winter for 4 years straight in the Northern Hemisphere (UK for instance, has 9 deaths per hour during last year's winter directly related to severe cold stress), severe rains and flooding in many tropical countries, alarmists are telling us to be worried also. So their message is -- it does not matter if there is global warming or global cooling, we just have to be worried. And when we are worried, then we will be scared to death to follow everything that they say -- like more energy taxation, more ecological regulations, more global climate junkets, more carbon trading and climate loans racket.

So, is the Earth burning? Or has high fever?

The latest satellite data of the lower troposphere says NO. There is no burning Earth syndrome, not even high fever indicator. The November 2010 global temperature anomaly was only 0.38 C, or one-third of 1 deg C warmer than normal compared to average global temperature from 1979 to 1998, from UAH satellite data. Graph source: http://www.drroyspencer.com/ 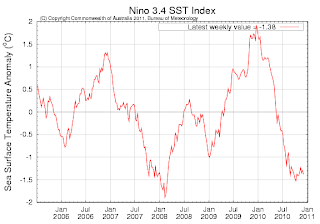 And here is Nino 3.4 region of the Pacific Ocean sea surface temperature (SST) anomaly as of December 5, 2010. It's still in the negative territory, with temperature anomaly of -1.4 C colder than normal. Current 2010-2011 La Nina trend looks similar to the 2007-2008 La Nina. Graph source, http://www.bom.gov.au/climate/enso/indices.shtml

Recently too, the "ice-free Arctic summer in less than 10 years" scare has been drumming up as the Cancun climate talks are on-going. This lie repeated over and over just will never go. Well, liars are liars, so they show only some pictures of icebergs breaking apart for instance, but they cannot show any graph to prove their point that Arctic ice in general is "melting at an alarming rate". 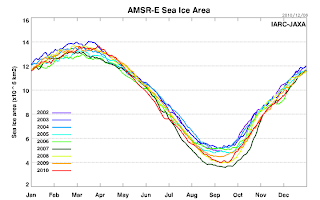 Here is the Arctic sea ice area as of December 5, 2010. Arctic ice are melting-growing every single year, repeated every decade. Current sea ice area there is nearly 10 million sq. kms. It should reach its peak of about 14 million sq. kms. by March-April next year. There is no way that Arctic ice will become zero in the near future, or even in a distant future. Pure lies by the alarmist fanatics. Graph source, http://wattsupwiththat.com/reference-pages/sea-ice-page/

So, next time those fanatics tell us to "be worried, be very worried", tell them, "You just want our money, more regulations, more and bigger government, more climate junkets."
Posted by Bienvenido Oplas Jr at 8:44 AM