There will be 24 speakers, see the list here, http://shanghaisummit.wordpress.com/speakers/. Seven of them I personally know and have met at least once. From left to right: 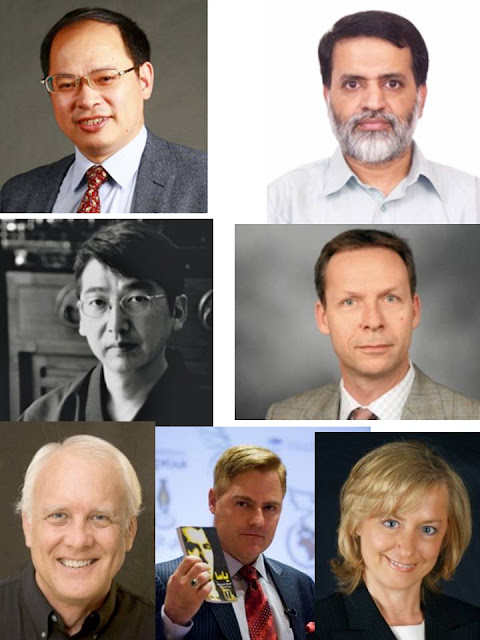 Barun and Xingyuan, I see them yearly since 2004 in different regional and international free market conferences and meetings. Sometimes I see them twice or thrice in one year, Barun especially as he would come to Manila as a speaker in other conferences here.

Hiroshi I've met in 2005 during the round table discussion on Hayek's book "The Constitution of Liberty" in Phuket, Thailand. Since then, I'd bump into him from time to time, but not yearly. Rainer worked at the Friedrich Naumann Foundation for Liberty (FNF) for many years, he helped organized the Economic Freedom Network (EFN) Asia annual conferences, and I have met him several times there.

Ken Schooland I've met twice, in Hawaii in 2007 then in Jakarta I think in 2010. He is the author of The Adventures of Jonathan Gullible: A Free Market Odyssey. Mary I've met only once, in Hawaii in 2007, while I've met Tom Palmer several times since 2008. He also came to Manila in 2009 and Minimal Government Thinkers helped organized four lectures for him in three universities here plus FNF Manila office.

I cannot attend this conference as I do not have a sponsor to pay for my plane fare and hotel, but I wish the organizers of this important event great success in terms of attracting more participants, especially from China. ISIL noted that Chinese scholar, Kenli "Li" Zhao Schoolland, has successfully organized Austrian Economics lectures in the past few years, so they have made this year's conference an international event.

I also hope that my other Chinese friend there from CIPA, Liu Junning, who at one time was considered the "Hayek of China" because of his deep intellectual discourse on liberty, rule of law, and other themes that Hayek discussed, would be able to attend. I heard a few years ago that the China communist government has marked him as a "dissident" and hence, is monitoring his movement.

Fellow defenders of individual liberty, free market and rule of law, in Asia and elsewhere, let us keep the torch burning.
---------

See also:
Top Asian free market think tanks, January 26, 2009
Hayek in Asia, September 20, 2010
Hayek 12: Friedrich Hayek's 20th Death Anniversary, March 26, 2012
(it has links to Hayek 1 to 11, discussion on some chapters of Hayek's book, "The Constitution of Liberty")
Why is Harry Thinking About Going to China? from HarryLeaks blog
Posted by Bienvenido Oplas Jr at 11:06 PM