On March 27, 2012, the Noynoy Aquino (PNoy) facebook profile posted this photo (the President riding on it) with the following caption: 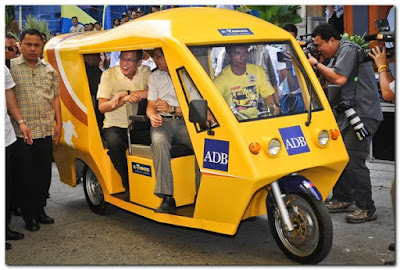 [Adm-08] The National Economic and Development Authority is set to provide 100,000 Electric Tricycles to operators in Metro Manila, Davao City, Boracay, Puerto Princess City, and Cabanatuan City. The Energy Efficient Electric Tricycle (e-Trike) Project will not only reduce fuel consumption by 560,926 oil barrels, it is a vital act in efforts to protect and nurture our environment.
I posted the above photo and caption in my facebook wall last April 02 and asked,

I am curious, who will pay for these 100,000 e-tricycles? Us taxpayers again via NEDA and LGUs? If e-tricycles are really cute and financially feasible, why not leave that to private enterprises to purchase and operate them? Why via government?

My posting attracted a number of comments from other friends. Here are some of them:

(1) Popoy: You raise a good point Noy, tricycles in this country are a bane to urban living, undisciplined, perennial traffic violators, and notorious for blocking the implementation of good policies (like the implementation of the clean air law and the prohibition of tricycles in katipunan avenue), increasing their number by 100,000 under the guise of energy efficiency is at the least a questionable public policy. Wala na bang ibang option? Why not promote cycling in urban areas instead? If you want reduction of fuel consumption, this is it!!! And is there a study on sustainablity? baka ipapamigay yan ang then in a few years time sira sira na yan at nakatambak..

(2) Doods: e-tricycles are still too expensive. perhaps the government should have engaged private corporations as partners via a PPP agreement.

I think this is another racket by the government and the ADB. Just focus on the financials alone: Who will be the beneficiaries and recipients of these 100,000 e-tricycles, political supporters of Malacanang, Governors and Mayors? I also suspect that the supplier/s of those 100,000 tricycles are large donors of the WWF and other climate rent-seekers and racketers.
I also suspect that these electric tricycles will not last long. Things that are government-issued tend to become dilapidated easily. Look back at the hundreds of thousands, if not millions, of hectares of government upland reforestation in the 80s funded by the ADB, WB and Japan government. We have paid for those xx hundred million dollars of loans and those man-made public forest are almost nowhere to see.
I further suspect that those e-trikes are not only expensive to purchase (about P100,000 each), they are also  expensive to maintain as the shops of the suppliers of those tricycles are not openly accessible and hence, are not subject to competition by many players. The batteries, I saw an electric jeepney in Bel Air Makati. I heard that it takes overnight charging for that e-jeep to allow it to travel for a few hours trip at day time.
Checked the ADB website, www.adb.org,  I can't find the press release or related literature for those 100,000 new tricycles. Why is it hidden?
More comments from other friends:

(3) Ronald: Great points . The answer is that government buys the vehicles with tax money, therefore OVERPAY the suppliers, and those suppliers kick back a few bucks. It's just cronyism.

Usually with bulk procurement by the government, cronyism is almost inevitable. The debt pusher (often no different from drug pusher) ADB and other foreign aid makes money from such loans, the debt addict (no different from drug addicts) borrower government, national or local, makes money through some kickbacks, the suppliers too make money. The recipient political supporters are happy to get free or highly subsidized tricycles and may not even pay in full later. It's us taxpayers again who will shoulder those costs.
Imagine also, 100,000 new tricycles! Even if only 30,000 will be for Metro Manila, 70,000 in the provinces, our highways will become slower with more tricycles in the national roads. It's good that they are prohibited in expressways. With daily use of often over-loaded tricycles, perhaps they will last only 4 years or less, especially the battery.
More comments from one of my discussion yahoogroups:

(4) Tere: I am also not particularly enamoured about the e-trikes, specially since it seems that GOP is borrowing from ADB for the project. I understand it is supposed to respond to the argument for cleaner air. Be that as it may, but the bigger problem not answered by the e-trikes is whether this is the solution to the more fundamental issue of providing for economical mass transit in the country, and the traffic congestion. Presumably if the project succeeds in replacing all the existing 2-stroke tricycles in the country (and the procedure for doing that can be complicated), we would still have traffic slowdown along the highway to Ilocos because of an e-trike, but at least the air we breathe is cleaner.

(5) Ed: just drop by Mandaluyong and try one for yourself. Same fare. Each route/trike coop has been provided one unit for trial, so it's kinda chancy. Theoretically, there won't be additional 100K trikes since they are suppose to replace, not augment. But how can NEDA provide these? It isn't even a line agency. Besides P10B for e-trikes sounds baloney.

Cons: only one charging station at city hall, at pag brownout lakad lahat.

The footprint of a motorcycle or a car is the same. There is no benefit to traffic in changing from one to the other.

It is obvious that the e-trikes are not the solution to the traffic problem or the lack of sufficient public transportation in Metro Manila and other big cities in the country. Even small population countries like Singapore, Hong Kong, Taiwan, do not have tricycles, not even jeepneys, only high passenger volume vehicles like buses and trains. The e-trikes are accommodations for various vested interests: (a) the debt-addict government agencies, national and local; (b) debt pusher foreign aid like ADB and WB, (c) climate racketeers like WWF, Greenpeace and Oxfam, (d) and suppliers of those e-trikes. A 5th benefactor, (e) Meralco and other electricity distributors for the new huge electricity consumers.
Taxpayers will not only pay for the purchase of those e-trikes, they will also pay for the daily electricity consumption of those tricycles, via those charging stations at city halls? And what's next, the spare parts, especially the battery of those tricycles, also to be charged to taxpayers?
Any bright idea, if it is indeed a bright one, will survive and prosper if it is financed via voluntary exchange in the market, not via tax money subsidies. The system of reward and punishment, of expansion and bankruptcy, is the best regulator and disciplinary action among market players. If things are provided at heavy subsidies, there is little incentive to make them sustainable. Rather, they'd wish an implicit early failure, so that another program, say from electric tricycles to electric jeepneys, will be distributed to political rent-seekers, to "save the poor", "save the planet" while at the same time, saving the pockets of those rent-seekers. It's a dubious vicious circle almost with no end in sight.
For me, this is another example why more foreign aid only often means more public debt, more racket for the debt addicts and the debt pushers.
------
See also:
Foreign Aid 10: Why We Don't Need It, February 15, 2010
Foreign Aid 11: People Mobility and Aid Hypocrisy, September 21, 2010
Foreign Aid 12: WB Corruption of Civil Society, March 23, 2011
Foreign Aid 13: Freedom from Borrowing, July 05, 2011
Fiscal irresponsibility 14: Debt crisis and government failure, August 08, 2011
Fiscal irresponsibility 15: Philippine government budget 2012, August 08, 2011
Fiscal Irresponsibility 21: Eurozone Debt, GDP and Unemployment, March 06, 2012
Posted by Bienvenido Oplas Jr at 2:44 PM