Upon the invitation of the President of the Philippine Pharmacists Association (PPhA), Ms. Leonila "Leonie" Ocampo, I attended yesterday the afternoon activity, also the formal opening ceremony, of the PPhA National Convention 2012, held at the University of Santo Tomas (UST) in Manila. There was a poster and product exhibit in the morning at the conference venue.

I was amazed at the big crowd, more than 2,000 pharmacists from around the country came, the biggest turnout so far. I will post photos later.

Here is the program for the Opening Ceremony. 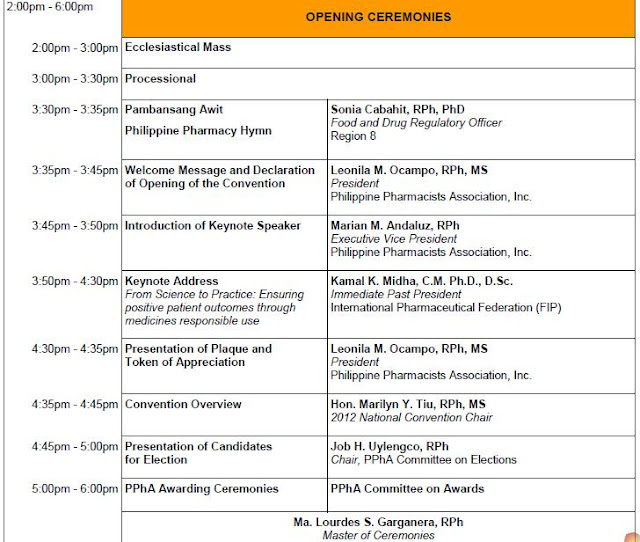 I was able to see the procession, then heard the opening message of Leonie and the keynote speech of Dr. Kamal Midha, the presentation of plaque, then I left. I will come later today, afternoon session as I have a talk in the morning on the Spratly/Scarborough Shoal, or the dispute in the West Philippine Sea or South China Sea, depending on which country you are standing on.

The welcome reception yesterday was sponsored by the United Laboratories (Unilab or UL) and its VP, Mr. Chito Sta. Maria, would give the message. UL is a giant pharma company here. Although it is a generic manufacturer, its annual sales is larger than the combined sales of #s 2 to 4, all innovator companies (GSK, Pfizer and #4 Wyeth, I think), it has lots of resources to give food, prizes, entertainment and other perks to the convention participants and organizers.

Dr. Midha's talk focused on rational use of medicines (RUM), the characteristics of medicines that should reach the public, and the importance of bioequivalence testing especially for generic drugs. He used the WHO definition of RUM -- right needs of a patient, right dosage, right time, and at affordable price.

There are six characteristics of medicines for the public, he said: Safe (adverse effect is avoided), Effective, Patient-centered, Timely, Efficient and Equitable. In particular, Quality, Safety, Efficacy and Affordability are all required characteristics.

He also discussed the problem of counterfeit medicines and how the public, with the assistance of pharmacists and other health professionals, can detect and avoid them. He said that Council of Europe has certain guidelines to help along this line, like all medicines should have 13 digits barcode.

Bioequivalence is important -- pharmaceutical equivalence, bioavailabilities after administration of the same molar dose under the same condition would show essentially the same effect as the innovator drugs.

I was actually expecting that Dr. Midha would give a technical presentation, like what are the strict processes required before bioequivalence can be declared or stamped on generic drugs that are newly introduced. Or the problem of antimicrobial resistance (AMR) that are related to irrational use of medicines. But nonetheless, his presentation was clear.

I was happy to see again yesterday two friends whom I have met during the Taiwan conference last November, the President of the Federation of Asian Pharmaceutical Associations (FAPA), Mr. John Chang from Malaysia, and FAPA Past President, Dr. Soo Ja Nam from S. Korea. PPhA Past President Normita Leyesa was also there of course.

What I find impressive in the PPhA Convention is the absence of high government officials -- say the DOH Secretary, or WHO Regional Director or Representative, or PhilHealth President -- as speakers, something that is so common in many private sector- or NGO-organized events like this one. Instead, key leaders of the profession, especially the Presidents (and past President) of the three international organizations (FIP, FAPA and WPPF) were given prominent roles to speak in the convention.

This is the way to strengthen and professionalize civil society organizations (CSOs) like the PPhA. To stand on their own, discuss matters among themselves, and rely less on certain political favors that high government officials would give them.