Note: this is my article yesterday in TV5's news portal,
http://www.interaksyon.com/article/29289/fat-free-economics-foreign-aid-public-debt-and-tricycles) 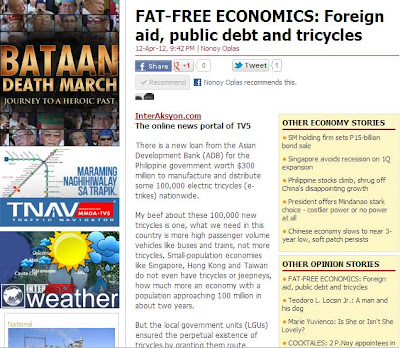 There is a new loan from the Asian Development Bank (ADB) for the Philippine government worth $300 million to manufacture and distribute some 100,000 electric tricycles (e-trikes) nationwide.

My beef about these 100,000 new tricycles is one, what we need in this country is more high passenger volume vehicles like buses and trains, not more tricycles. Small-population economies like Singapore, Hong Kong and Taiwan do not even have tricycles or jeepneys, how much more an economy with a population approaching 100 million in about two years.

But the local government units (LGUs) ensured the perpetual existence of tricycles by granting them route monopolies. Route A from the municipal proper to Barangay A is to be monopolized by tricycle operators and drivers association (TODA) A. Jeepneys, air-con vans or mini-buses are banned and prohibited from putting up any competition to the tricycle monopoly A. The same goes for TODA B, TODA C, etc. for route monopoly B, route monopoly C and so on.

If LGUs do not create route monopolies for tricycles, then competing public transportation like air-con vans in urban centers, and jeepneys in rural areas can easily fill the transport gap that is monopolized by tricycles. Tricycles would follow a natural death if ordinary folks and commuters are simply given more choices, more options in public transport, not more monopolies.

A second issue is the additional public debt that we would incur from creating these monopolies. Interest payments alone constitute around 20 percent of the annual budget of the national government, principal amortization excluded.

A third concern is if e-trikes are really cute, really financially viable, why not leave it to the market and see if operators will take on the business even without a taxpayers' subsidy. We taxpayers will pay for those 100,000 new tricycles through NEDA-DOE-DOF and LGUs. And the beneficiaries are most likely the political supporters of mayors and governors in the recipient LGUs, as well as supporters of the current administration. If these e-trikes will get zero taxpayers subsidy, then thank you. Unfortunately, I have not seen any document saying that this is the case considering that there is heavy government involvement in the planning and implementation of this project.

A fourth issue is the electricity bill of those e-trikes, which will be borne again by taxpayers through LGU recharging stations. If operators or their drivers will recharge at home, then thank you. If it's us taxpayers, no thank you.

A fifth issue is maintenance and replacement of old and depreciated lithium batteries. Will this be charged to taxpayers, or to private operators with zero tax subsidy?

A sixth issue is the endless rent-seeking and energy/transportation rackets all in the service of "saving the planet." I have three questions for the defenders and propagators of this campaign:

One, where are those scientific data showing that natural factors -- the sun, galactic cosmic rays, water vapor, clouds, volcanoes, other natural greenhouse gases (GHGs) -- are ruled out, are categorically denied, as drivers and contributors to the earth's climate change?

Two, is there no such thing as global cooling, only global warming? No natural climate cycles of warming-to-cooling and back, only "unprecedented, unequivocal man-made warming?"

Any bright idea - if it is indeed a bright one - will survive and prosper if it is financed through voluntary exchange in the market, not through tax subsidies. The system of reward and punishment, of expansion and bankruptcy, is the best regulator and disciplinary tool among market players.

If things are provided at heavy subsidies, there is little incentive to make them sustainable. Instead, people would become complacent, and the original project will be slowly abandoned.

From e-trikes to e-jeepneys and e-buses, only political rent-seekers and their political supporters stand to gain. It is a dubious yet vicious cycle with no end in sight.
--------

Meanwhile, here is the ADB's youtube propaganda of those e-trikes,
http://www.youtube.com/watch?v=n1mVrZJZCOQ

And here are some details on this project at the ADB website,

The interest rate and other terms for this new fiscal irresponsibility project is not included in the above project data sheet.
--------