(Note: this is my article last week, April 13, in the online magazine,
http://www.thelobbyist.biz/perspectives/less-gorvernment/1295-small-scale-robbery-and-property-rights) 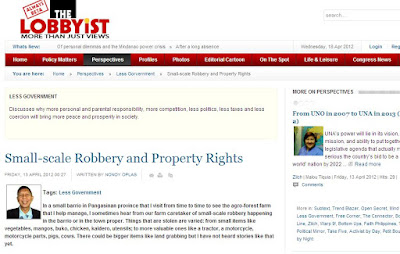 In a small barrio in Pangasinan province that I visit from time to time to see the agro-forest farm that I help manage, I sometimes hear from our farm caretaker of small-scale robbery happening in the barrio or in the town proper. Things that are stolen are varied: from small items like vegetables, mangos, buko, chicken, kaldero, utensils; to more valuable ones like a tractor, a motorcycle, motorcycle parts, pigs, cows. There could be bigger items like land grabbing but I have not heard stories like that yet.

Then there are small-scale but frequent logging and theft of standing trees in the public forest land. Stolen and felled trees can range from arm-size in diameter to larger trees for lumber.

These small- to medium-scale robbery are actually more of exception rather than the rule as most of the people there, or in other parts of the country for that matter, are honest, have jobs, and would rather work than steal someone else’s property. But we notice and remember such petty or small-scale crimes because of the threat that someday those abnormal characters might victimize us too.

So I ponder as I hear these stories, that many Filipinos have little respect for property rights, whether public or private property. Stealing in public property like cutting trees in public forest land is often regarded as “tolerable”. One reason is that the extent of robbery and corruption in many government agencies and offices are a lot more damaging than stealing trees in the mountains. Another reason is the “tragedy of the commons” where a property is owned by everyone and no one in particular. So an upland charcoal maker or illegal logger is actually “part-owner” of the trees that they cut and transport from public forest lands.

When incidence of stealing of private property becomes predominant, that sends a bad signal to would-be rural and farm investors and entrepreneurs. So some agri-business projects, small to big/corporate, may not take off in certain areas of the country because of this fear of being victimized by thieves, both from within and outside the business organization.

It is important therefore, that a culture of respect for property rights, respect for the rule of law, be ingrained in the minds of our people. Then more investments, more job creation will follow.

The International Property Rights Index (IPRI) 2012 Report was released late last month in the US. It ranks countries on how much they respect and protect private property rights. The annual study looks at three major components:

For this paper, I will just focus on the 2nd component, the protection of physical properties – a house, car, cellphone, tv, rubber shoes, etc.
PPR is composed of three sub-sections or sub-components.

a. Protection of Physical Property Rights. This variable relates to the strength of a country’s property rights system as reflected on the quality of judicial protection of private property including financial assets.

b. Registering Property. This shows businesses’ point of view on how easy or how difficult it is to register property, to sell or dispose property like land, house or building.

c. Access to Loans. Access to bank loan without collateral is a proxy for the level of development of financial institutions in a country.

Overall, out of the 130 countries covered by the study, the Philippines ranked 87th. Not a good rank, but at least not too low either.

In the 2nd component, PPR, the Philippines ranked 76th out of 130 countries, or it ranked 16th out of 19 Asian economies in the PPR category. What pulled down the country is the long and tedious procedures in registering property, even in opening a business. Another reason is the limited practice of loan without collateral. Poorer people with no credit cards or no bank deposits will have a hard time getting a bank loan unless they present some of their physical properties (land, tractor or tricycle, etc.) as collateral.

Other Asian economies and their global ranking in PPR are:

This looks like an odd or weird result, that communist China has a higher global rank than capitalist Thailand and S. Korea in protecting physical property rights.

The incidence of robbery, direct or indirect, is often directly related to public perception of the integrity of public institutions and government officials. If the people think that many government personnel and officials are wasteful and corrupt, then stealing others’ property is a thought that they might just commit, knowing that government law enforcers are busy with other activities like extortion and do little in going after the real thieves. If thieves are caught, perhaps they can bribe their way out of prison and the probability of punishment goes down.
---------

More about this year's Report

The Property Rights Alliance (PRA, http://propertyrightsalliance.org/), the main sponsor of the annual reports, did not produce a hard copy of the report this year. But the online copy is more interactive, readers can explore topics and ranking of countries or regions. 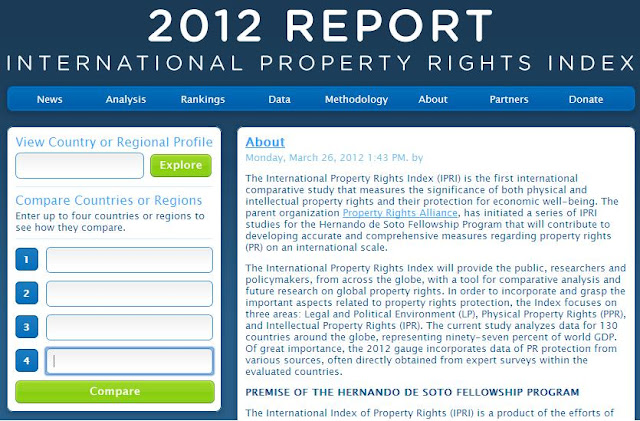 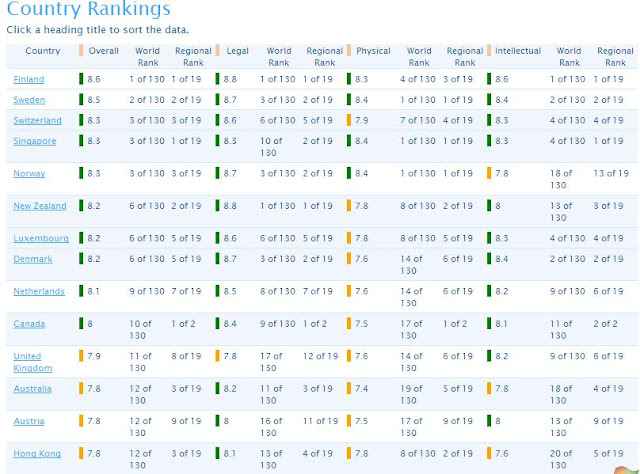 The 2012 Report was backed up by many partners, independent (non-government) free market think tanks and institutes from many countries around the world. MG Thinkers is among them, and the only one from the Philippines which is a partner of this important project. 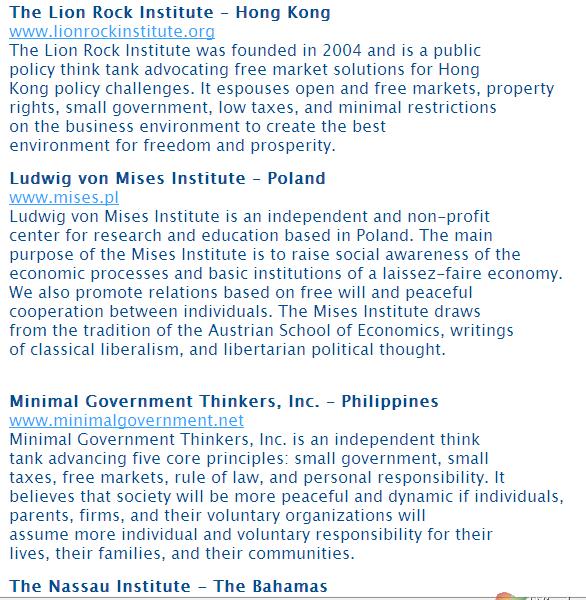 We are thankful to the PRA and the Americans for Tax Reforms (ATR, http://atr.org/) for inviting us each year (since the 2009 Report) to be a partner of the annual IPRI Report.

Absolutely agree. There MUST be a rule of law that enforces property rights, or else you run the risk of scaring off business, jobs and investors.