The existing drug price control policy (also known for their illegal terms as MDRP + GMAP) in the Philippines will turn three years old in four months. I checked today google search engine and typed "drug price control" and I was surprised of the result. 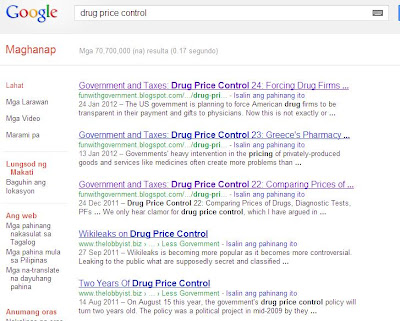 The top five papers there were all mine :-). Three from this blog:

Two from the online magazine, http://thelobbyist.biz that I wrote in August and September, 2011. 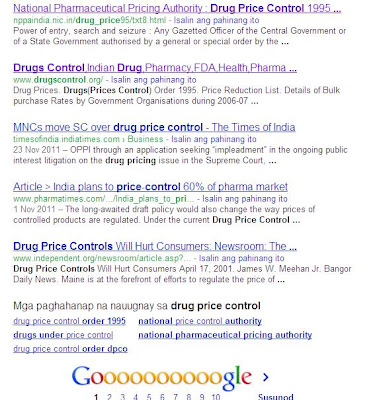 The next five articles are the cases of India. No. 6, National Pharmaceutical Pricing Authority is a government website about the Drugs (Price Control) Order 1995.

The 7th paper on Drugs Control, Indian Drug Pharmacy is nice, it lists the recent articles with links. But one needs to register and log in their site.

The article on  MNCs move SC over drug price control dated November 23, 2011 is interesting. Drug manufacturers, mainly multinational-innovators, are pleading the Indian Supreme Court (SC) to be heard on the issue.

This is a weird issue. Pricing of commodities like drugs are to be heard at the SC? Usually protagonists debate at an agency under the Executive Branch, say the Ministry or Department of Health. People go to the SC only to question the constitutionality of an order by the Executive or Legislative branch, or even by local government units (LGUs), but they should not debate the pricing of commodities there. But then again, I'm no lawyer, much less familiar with Indian laws and Constitution.

Another interesting article there, India plans to price-control 60% of pharma market dated November 01, 2011. It's about the plan of the Indian government to expand the list of price-controlled medicines from the current 34 to at least 400. For me, this is another weird development. India boasts of about 20,000+ pharmaceutical companies, from small to large, from generic to innovators. So one can expect that the level of competition among them should be very high, resulting in very low drug prices. So why another government coercion to further influence prices downwards? The competition is not working or the government officials simply want to look "heroes" to the people?

The last or 10th article there, Drug Price Controls Will Hurt Consumers  from The Independent Institute (US) dated April 17, 2001, is self explanatory. The author of the paper is proposing an alternative:

Most of those literatures here saying that "drug prices in India are a lot lower than in the Philippines" could be referring to drugs that are under price-controlled by the Indian government. So Norvasc 10 mg price-controlled in India should be several times cheaper compared to Norvasc 10 mg in 2009 prior to our price control policy implemented in August 16, 2009. But after the price control here, the prices of the two products should not be far behind. Consider also the fact that medicines here are taxed by the government, national and local, while they may not be taxed in India, and the price differential between the two countries is further exacerbated and distorted.
-------