Yesterday afternoon, I attended the 2nd day of the Philippine Pharmacists Association (PPhA) National Convention at the University of Santo Tomas (UST) in Manila. I skipped the morning session because I attended the "Online Onsite" program of interaksyon.com at the Enterprise Center, Ayala Avenue, Makati City. I spoke in an informal setting, about the conflict with China over Scarborough Shoal, the Spratly Islands, at the West Philippine Sea or South China Sea, and the interaksyon guys were tweeting my talk, feeding me questions from twitter and from other guys on the site which I also answered. Here's my presentation there,  http://interaksyon.com/assets/documents/interaksyon_online_onsite.pdfinteraksyon.com

Thus, I was not able to listen to the presentations of four good speakers like Dr. Lagrada of PhilHealth, Joey Ochave of UL, John Ware of WPPF, and Ms. Marilyn Tiu of the Board of Pharmacy. 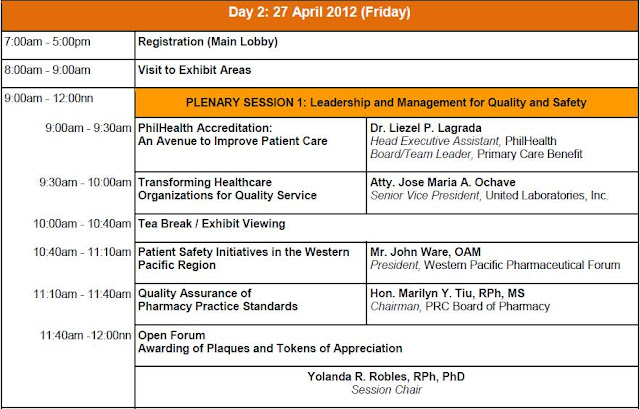 I was not able to leave Makati early, I wanted to hear Dr. Midha's presentation about bioequivalence and related subjects. I came late, poor me. But I was able to hear the presentation by a good friend, John Chang, the President of FAPA, then by Leonie Ocampo. 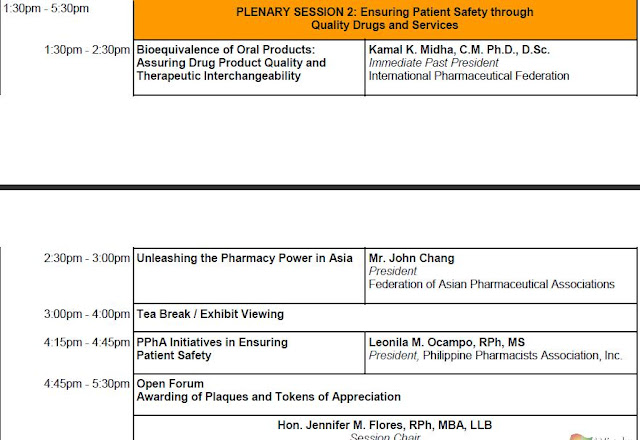 John talked about the evolving roles of pharmacists: Traditionally from compounder (of drug molecules) to medicine selling/dispensing to counselling + information, to patient care and pharmaceutical care. This is a good evolution of roles. Towards the latter part of his talk, John showed a quote something like "There's no future in (medicine) dispensing, it can be done via the internet, by the machine, or hardly-trained personnel".

There is truth to this. Many pharmacies and drugstores -- especially those owned by the government (Botika ng Barangay or BnB, supported by the DOH), or private non-chain drugstores -- are manned by non-pharmacists, some even have zero formal training in pharmacy. They could be any political appointee by the Barangay or Village Chairman.

So it is possible that many pharmacists are over-educated (mind you, they have to pass a board and licensure exam by the government after hurdling 4 years of college education) if their work will just be limited or focused on drug dispensing and selling.

John also discussed about a debate in some countries where physicians complain or charge that "pharmacists act like physicians", and the reverse of the argument, that "physicians act like pharmacists." It's about the division of labor between the two on drug prescription vs. drug dispensing. John said that there should be complementarity of function between the two because the goal is the same -- patient care. Nice point there, John. 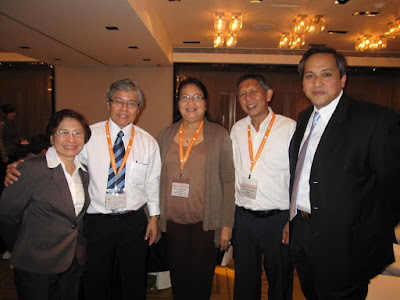 I don't have photo of John and Leonie during the convention, but I have one during the CGDA Conference in Taiwan last November. From left: Nancy Tacandong of FDA, John Chang, Leonie Ocampo, me and Joey Ochave.

The presentation by Leonie was good, lots of good data for the Philippines, like the following:

1. In community pharmacy, about 60 percent of the pharmacy business is controlled by the biggest chain with 800+ outlets nationwide. (That's Mercury, who else -- me)

Then Leonie discussed some unfavorable practices of the profession:

- Poor implementation of the "no prescription, no dispensing" rule;
- Poor storage of medicines practices,
- Medication counselling is not practiced;
- Sale of medicines unsupervised by trained pharmacists in non-traditional outlets (like those walking house to house carrying medicines in hand bags, selling drugs in public markets, etc. -- me)

She noted that "Pharmacists appear overeducated and underutilized". Thus, there is big role by the PPhA being the main (and only) professional association of Filipino pharmacists. PPhA is the umbrella organization of 10 affiliate organizations and 82 local and provincial chapters.

The various initiatives, projects and networking by PPhA were discussed by Leonie. I won't mention them here, I think her presentation will be made available in their website soon.

In relation to the top killer diseases in the Philippines and worldwide, about 2/3 are from non-communicable diseases (NCDs), medicine and lifestyle counselling will be an important role for pharmacists. What good are the most effective drugs made cheaper via drug price control and coercion policy, or even freely available via government of hospitals and assistance to the poor, if the patient will continue their unhealthy lifestyle like over-drinking, over-smoking, over-eating fatty and salty food, over-sitting and sedentary life?

Identification and monitoring of counterfeit and/or substandard drugs is also an important function for pharmacists. We ordinary folks will not be able to detect such, especially if we go to lesser known or even known for notoriety pharmacies, and worse from non-traditional outlets like "sari-sari" or variety stores, those sold on house to house marketing, etc.

Again, it is refreshing to hear that many of public health problems have private solutions, relying little or zero on politics and politicians. Health is mainly personal and parental + civil society responsibility.