China is now the world's second largest economy in terms of GDP size, next to the US and larger than Japan's. Its government under the Communist Party of China is possibly the 2nd biggest around the world in terms of size of government spending, from central/national to local government levels.

Like all big governments worldwide, the China government is also indebted, but not as high as the public debt of the governments of Japan, US, Canada, UK, Germany, France, etc. whose debt/GDP ratio is 60 percent or higher.

Here's what I saw about China's debt with the Asian Development Bank (ADB).


The People's Republic of China (PRC) has received a total of $24.54 billion in loans assistance since joining ADB in 1986, making it ADB's second largest borrower and its largest client for private sector financing. In 2010, ADB approved $1.321 billion in sovereign loans to the PRC, $587 million in private sector loans and equity investment, and $22.17 million in technical assistance.

Then I saw from the facebook wall of a friend from Ghana, Franklin Cudjoe, this news report.

The Government of Ghana has secured US$ 1 billion of the much-talked about US$ 3 billion China Development Bank (CDB) loan at a signing ceremony in China today.

Components (subsidiaries) of the $1 billion include the onshore and offshore pipeline as well as the gas processing plant all of which come under the Gas Infrastructure Project and the second component is the ICT platform for the surveillance of the Oil and Gas Infrastructure.

So the Chinese government is borrowing with one hand, not only from the ADB but also from the WB, OECF, other multilateral and commercial lenders. Then the other hand lends huge money to other governments, especially in Africa. Who's subsidizing whom here?

Meanwhile, here are some of the new climate rent-seeking programs and loans of the ADB in China, posted in  http://www.adb.org/countries/prc/main 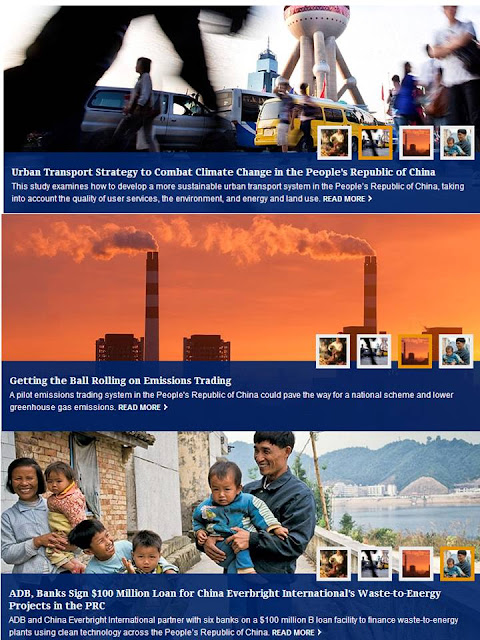 1.Urban transport strategy "to combat climate change" in PRC,
2. Pilot carbon emission trading system (Carbon ETS) in PRC,
3. Clean waste to energy plants. Neutral terms there but the implicit message is to "help save the planet."