(Note: this is my article today in the online magazine,
http://www.thelobbyist.biz/perspectives/less-gorvernment/1300-banks-filipino-savings-and-the-bsp) 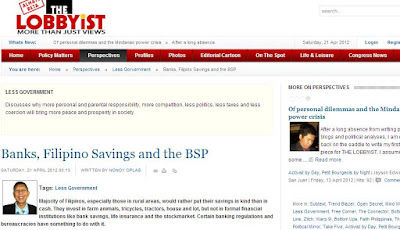 Majority of Filipinos, especially those in rural areas, would rather put their savings in kind than in cash. They invest in farm animals, tricycles, tractors, house and lot, but not in formal financial institutions like bank savings, life insurance and the stockmarket. Certain banking regulations and bureaucracies have something to do with it.

1. Only two out of ten families maintain deposit accounts;
2. In Metro Manila, less than 1 percent had investments in stocks, mutual funds, fixed income securities. Outside the region, the percentage is negligible.
3. Only four percent of households have credit cards.

“Bottom line, people should be saving if they can. And saving in banks is a better option for an individual than keeping money under the mattress,” he said.

“Money saved in banks also help the economy when these are recycled through loans to productive activities.”

I think Mr. Espenilla and other central bank officials do not understand the savings and investment preferences of many Filipinos. Here are some factors why I say so, and why many Filipinos are not enthusiastic in putting their savings in the banks.

One, the “five-six” (one borrows P5 and pay P6 at the end of the month, or an interest rate of 20 percent per month, really high) and other informal lenders are more adventurous, more borrower-friendly than banks. The poor stall owners (tinderos and tinderas) in public markets would borrow at high interest rate with these informal lenders as these” guys go to the tinderos in their tindahan and stalls, the banks do not. The banks want the tinderas to leave their stalls and go to them.

Two, the informal lenders do not rely much on paper work, no credit application form to submit, no collaterals required, they rely more on word-of-mouth information about the new borrowers, while the banks require all forms of paper work + pictures + IDs issued by the government+ collateral papers + a co-borrower name and signatures + other requirements.

Three, the informal lenders are anywhere, even in far-flung barangays and sitios, they may even be neighbors of the borrowers in the barrios, while banks are located in the city or municipal center.

And four, the “five-six” guys bear the risk of being held up by gangs and street criminals while doing the rounds as they collect daily, not monthly, endure the heat and rain, dust and pollution, while the bankers are in air-conditioned rooms, protected against dust/pollution/heat.

The poor’s savings and investments are usually not in cash or in piggy bank, but in kind: cows, pigs, goats or other farm animals, a tricycle, a tractor, a rice thresher. There is probably higher liquidity here compared to bank deposits. If an emergency arises in the family, they can sell those farm animals any day as meat buyers are looking around seven days a week. Banks are close two days a week so if an emergency arises on a weekend or a holiday, people cannot get their money.

Interest income from bank savings is also very low, usually two to four percent per year, then the government will remove 20 percent of whatever small interest revenue as a withholding tax.

The BSP or the central planners of monetary policy, money printing and bank regulations, they are busy issuing regulations left and right to the banks, penalizing and even closing those who cannot deal with the regulations like minimum capitalization.

One thing going against the BSP as a political institution, is that it can be headed by political appointees with little or zero background in banking, usually former Cabinet Secretaries of the outgoing administration. For instance, among the Monetary Board members are former Secretaries Toting Bunye and Peter Favila of the previous Gloria Arroyo administration.

From now up to early 2016, many key supporters of the current PNoy Aquino administration, especially Cabinet Secretaries ending their term by mid-2016, will be lining up to become "board members" of the BSP even if they have little or zero background in banking and monetary policy. Huge pay, giant perks, zero risk of bankruptcy, what else can one ask for.

So with these risk averse but highly paid monetary bureaucrats issuing new regulations to banks and other financial institutions, one can see a disconnect in their worldview with the players on the ground. It is good that the five-six guys and other informal lenders are outside the powers of the BSP. Otherwise, those motorcycle-riding lenders will be riding ADB-funded e-trikes,
--------