Note: This is my article today in TV5's news portal,
http://www.interaksyon.com/article/28670/fat-free-economics-property-rights-policy-lefts 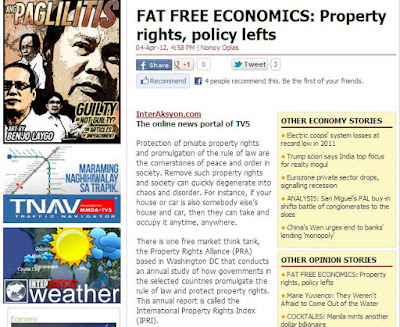 Protection of private property rights and promulgation of the rule of law are the cornerstones of peace and order in society. Remove such property rights and society can quickly degenerate into chaos and disorder. For instance, if your house or car is also somebody else’s house and car, then they can take and occupy it anytime, anywhere.

There is one free market think tank, the Property Rights Alliance (PRA) based in Washington DC that conducts an annual study of how governments in the selected countries promulgate the rule of law and protect property rights. This annual report is called the International Property Rights Index (IPRI).

The study gives a particular score, then ranks those countries globally based on three major factors: (1) Legal And Political Environment, which includes judicial independence, rule of law, control of corruption and political stability; (2) Physical Property Rights, which include protection of such rights, registering property and access to loans; and (3) Intellectual Property Rights, which include protection of IPRs, such as patents and copyrights.

Our think tank here in Manila, Minimal Government Thinkers Inc. is among the nearly 70 independent and free market institutes, and the only Philippine-based think tank, that co-sponsored the publication of this annual study.

The 2012 Report has been released this week. Please note that while it was released this year, the basis of comparison were 2010 to 2011 data. Of the 130 countries covered by the study, the top 10 positions were garnered by developed economies with small populations. The first five, in order, are Finland, Sweden, Norway, Singapore, and Switzerland. The next five are Denmark, Luxembourg, New Zealand, Netherlands and Canada.

The Philippines ranked 87th out of 130 countries. While it performed fairly in Physical Property and Intellectual Property protection, it performed badly in the Legal and Political Environment. The culprit is the political instability, the bad state of corruption in government, poor observance of the rule of law and lack of judicial independence.

The continued low ranking of the Philippines does not look good. If we need to attract more investors, grow the economy and create jobs, we need to assure entrepreneurs and employees, the average folks, that the fruits of their hard work and persistence in life are properly respected and protected. One should not toil hard abroad or in this country to buy a modest house and lot, only to find out later that the land is also being claimed by other people, resulting in additional costs and emotional stress in going to the courts and law enforcement agencies.

Populist and left-leaning policies - such as protection to squatters who illegally occupy private lands and an agrarian reform program with no final deadline and timetable - result in uncertainties.

These plus the weak rule of law end up in weak property rights enforcement for certain properties. These things must change if we want to retain the pool of talented entrepreneurs, as well as attract foreign professionals and investors, to come to the country.