This morning, two friends posted in their facebook wall an article from mises.org, lambasting intellectual property rights (IPR), as usual. 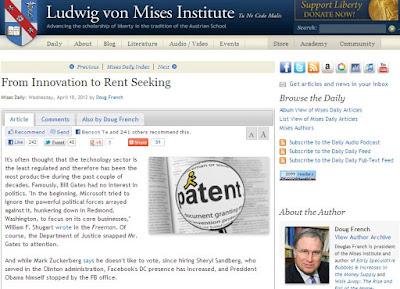 The paper was written by no less than the President of the Mises Institute, Doug French.

Below is the wall posting from "I bet Ludwig von Mises...". I posted contrary opinions and here are our exchanges.
----------

I bet Ludwig von Mises can get more fans than John Maynard Keynes · 15,030 like this
4 hours ago ·

And my friend Jules Calagui, also posted the same article. Here are our exchanges.

Nonoy Oplas Jules, not all people, not all dogs, not all ideas, are the same. Mediocre ideas are everywhere, they don't need protection. Bright ideas are scarce, they need protection, http://funwithgovernment.blogspot.com/2012/03/on-ipr-abolition-13-protecting-bright.html

Government and Taxes: On IPR Abolition 13: Protecting Bright Ideas from Mediocre Ones
funwithgovernment.blogspot.com

But studies have not shown any net gain from patent-law-induced innovation. Kinsella suggests,


Perhaps there would even be more innovation if there were no patent laws; maybe more money for research and development (R&D) would be available if it were not being spent on patents and lawsuits. It is possible that companies would have an even greater incentive to innovate if they could not rely on a near twenty-year monopoly.

Instead of spurring innovation, IP appears to be a rat's nest of litigation. For example, Google's chief legal officer, David C. Drummond, estimates that a modern smartphone might be susceptible to as many as 250,000 potential patent claims.
This quote, "studies have not shown any net gain from patent-law-induced innovation." Really? Then we are not experiencing piecemeal, marginal changes and improvements in technology? Current brand of cell phones and TV are almost the same as the cell phones and TV 5 or 10 years ago?

The statement by Kinsella is more wild guess than statement of facts. Why? One can go to N. Korea or Zimbabwe or Somalia, I think they have no patent laws there, no copyright and trademark laws. Are there more innovations, more money for R&D there, compared to the US, Europe, Japan, S. Korea where there are lawsuits and patent wars?

The third paragraph, I think it's not only in IPR and innovation that there are plenty of lawsuits and litigations in America. In corporate mergers, corporate in-fighting, healthcare, etc., there are plenty of litigations too. The series of diagnostic tests required by physicians before they will diagnose their patients and prescribe certain medications -- which make healthcare and treatment very expensive in the US -- is a result of frequent lawsuits and physicians paying huge amount of legal insurance to protect them from potential lawsuits by their patients in the future citing "medical malpractice".

Hello Everybody,
My name is Mrs.Irene Query. I live in Philippines and i am a happy woman today? and i told my self that any lender that rescue my family from our poor situation, i will refer any person that is looking for loan to him, he gave me happiness to me and my family, i was in need of a loan of $150,000.00 to start my life all over as i am a single mother with 2 kids I met this honest and GOD fearing man loan lender that help me with a loan of$150,000.00 US. Dollar, he is a GOD fearing man, if you are in need of loan and you will pay back the loan please contact him tell him that is Mrs.Irene Query, that refer you to him. contact Dr Purva Pius,via email:(urgentloan22@gmail.com) Thank you.