Note: this is my article yesterday in the online magazine,
http://www.thelobbyist.biz/perspectives/less-gorvernment/1291-foreign-airline-taxes-and-klm-pullout. 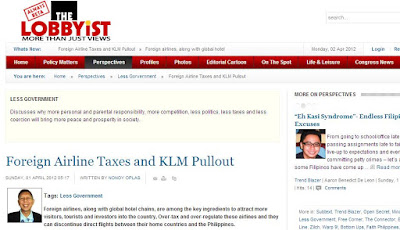 Foreign airlines, along with global hotel chains, are among the key ingredients to attract more visitors, tourists and investors into the country, Over-tax and over-regulate these airlines and they can discontinue direct flights between their home countries and the Philippines.

This is what happened to KLM-Air France, the only remaining airline that served the Manila-Europe direct flight. For many months and years, they have been suggesting to Congress, DOF and Malacanang to scrap the 3 percent common carriers tax (CCT) on foreign airline’s gross turnover, and 2 percent Gross Philippine Billing Tax (GPBT). Receiving no explicit action except promises and some slow-moving legislative actions, KLM has finally discontinued the Manila-Amsterdam direct flight this week. It would be flying Manila-Taipei-Amsterdam. In the process, it will reduce its Manila-Amsterdam passengers and pay reduced taxes to the government.

So now there are no more Manila-Europe direct flights. There are also no Manila-US direct flights for foreign airlines, only the Philippine Airlines (PAL) has such privilege, but the US destinations are very few. Germany’s Lufthansa Airlines used to have Manila-Frankfurt direct flights, but it discontinued many years ago partly because of these two taxes, leaving KLM as the only European airline flying direct to Manila. And this too is gone.

Competition among Europe-bound airlines will be via secondary routes: Manila-Europe via Bangkok or Hong Kong, Hanoi, Taipei, Tokyo or Seoul. It will be time consuming for both inbound and outbound passengers in landing, go through security check up and X-Ray machine, board the plane, then wait for take off, This process can take at least one and a half hour to four hours or more, if flight delays should occur.

So some Europeans wanting to visit the Philippines may not push through and just stop in Thailand or Vietnam or HK, etc. and go back to Europe. The Philippine government’s tax greediness is actually shooting its own foot in the continued existence of the CCT and GPBT.

The most recent report from Congress this week is that a House Bill removing these taxes has been passed on second reading. This is good news, somehow. But what is needed is a real law, not just a Congressional bill which may not become a law until another round of elections next year.

In the absence of such law, there will be no direct Manila-Europe flights. Other Middle East-based airlines are planning to discontinue direct flights from Manila to their home countries, like Qatar Airways.

Then there is a terminal fee of P750 and the terminal does not even have a drinking fountain, so passengers have to shell out more money to buy expensive bottled water from food shops that pay high rental rates to the government airport authorities. There are lots of duplicating taxes and fees imposed by the Philippine government related to foreign travels and cargo. This is not good if we wish to attract more tourists, more visitors, more investors into the country.

The simple solution – but not too simple for tax-hungry governments -- is to abolish all taxes on foreign travels except VAT on plane fare and taxes on fuel products. Aviation fuel is already slapped with three different taxes: import tax, excise tax, and VAT. The terminal fee can be drastically slashed, or retain the rate but the airport authorities should provide more services to the passengers, like cleaner toilets and accessible free drinking fountains.

The goal is to make the country an attractive destination for millions of foreigners and returning or visiting Filipinos who have been living and working abroad. The government can actually collect more taxes under this scheme. Obviously, this has not been the case in government thinking in the past. They want to slap as much taxes and fees to the few foreigners and visiting Filipinos who come here.

The law of unintended consequences always corrects government tax greediness. We hope that the bills abolishing CCT and GBPT will become a law within the year or early next year.

Really enjoyed reading your post on this outstanding website i appreciate you for this article...
removing taxes on foreign airlines..