CSOs and State 16: The Integrity Initiative

Government is force and coercion. It is an institution created by men and women mainly to protect themselves, their families and friends, their properties, from bullies among the population. It was a good "social contract" where people surrender a portion of their individual freedom to the government, like the "freedom to revenge" and physically attack those who committed physical aggression against them and their properties. Government and its courts, justice and police system is supposed to do that job, to penalize those who disrespect other people's right to peaceful living.

But governments since then have been expanding and getting larger to monster institutions. Rule of law was supplanted by rule of men, and some bullies, thieves and other criminals have captured government power so they can become bigger bullies protected by the government itself and its armed forces. Corruption and plunder is among the byproducts of this situation. Another is large-scale human rights violations, imprisonment if not murder of those who protest dictatorial and despotic governments.

In order to minimize or avoid this situation, government itself created certain offices and mechanisms for self-policing and self-regulation. Thus, the separation of power among the Executive, Legislative and Judiciary branches of government, fiscal and oversight function of opposition political parties, and creation of anti-corruption Commissions, Bureaus or Task Forces within the government. But these offices did not do their function in many countries like the Philippines and thus, corruption has become the norm rather than the exception in many countries and governments.

Non-government mechanisms and initiatives have sprang up recently in many countries like the Philippines, to help fight government corruption. The approach is different than the usual anti-corruption campaigns. Instead of pressuring government to limit corruption from within, the move is to pressure private enterprises and individuals to stop bribery with government offices and even to report corrupt and extortion practices by certain government officials.

This is the thrust of a new group called the Integrity Initiative (II). I have attended a talk by II Chairman, Ramon del Rosario of the Phinma Group of Companies last month. It was held at the Asian Institute of Management (AIM) in Makati and was mainly sponsored by the Pharmaceutical and Healthcare Association of the Philippines (PHAP) and its partner companies, NGOs and government offices like the DOH.. I liked his talk, short (15 minutes or less), extemporaneous and direct. He said that from an initial 100 company-signatories in 2010, II has grown to more than 1,500 signatory companies. They are now piloting two procedures. One is an Integrity Assessment where companies self-declare certain practices to avoid or minimize corruption with government, and two, an Integrity Validation to be done by a third party and check if those self declaration by a signatory company are correct or not.

During the open forum, I spoke and praised this initiative as truly civil society. It's a unilateral action by the private enterprises and groups themselves to start cleaning up their own ranks first, then demand that government should clean its ranks too. This will be a good branding for company-signatories and have obeyed the processes of II. Thus, II-affiliated companies can "brag" or openly declare that they are doing their businesses in transparent manner and comply with certain government regulations. This can be considered as a trademark by which other companies (suppliers and buyers) and ordinary consumers can hold on and expect that what those companies say are indeed true. A pressure from the outside by a united group of companies from different sectors or fields of business can exert substantial change in government.

I also suggested that while there are industry associations in each sector or industry, some of those associations do not have their own code of ethics and self-regulation mechanisms to avoid unethical marketing and advertising of their products and services and hence, cheat on their consumers. So II can possibly create committees to represent the different sectors and industries that can exert if not impose a code of ethics for member companies in each committee.

I cited a story of an anesthesiologist friend who complained that they caught one local pharma who sold a counterfeit or substandard anesthesia to one hospital. An anesthesia, if in good standard and effective, is supposed to take effect within minutes to a patient. So for a patient to undergo surgery, he is supposed to feel numbed and be asleep within minutes before the knife will slice his/her tummy or other body parts. But the patient was wide awake, did not get numbed, and it is impossible to do the surgery otherwise the patient will be shouting in deep pain. So the surgeons and anesthesiologists have to scamper for a new set of anesthesia before the surgery can proceed. Surgery done. After that, they reported the incident to the FDA through a very confidential letter, and the pharma company later knew of such letter complaint, meaning they have a "mole" within the FDA and threatened to sue the complaining physicians.

There were other comments from the audience like those from Leonie Ocampo of the Philippine Pharmacists Association (PPhA). Later, Doc Virgie Ala, the director of DOH-NCPAM, came to represent DOH Assistant Secretary Madz Valera who was supposed to give a talk too in that event, but was not able to come due to a sudden Senate Committee meeting that she has to attend. Doc Virgie expressed support for such civil society initiative like the II, as it would be easier for government offices to reduce corruption if there is such initiative from the private sector. 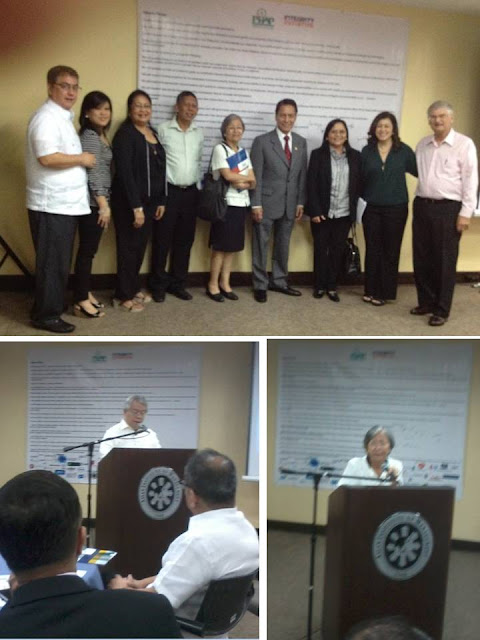 IN 2003, world leaders adopted the United Nations Convention Against Corruption and designated Dec. 9 of each year as International Anti-Corruption Day in a bid to promote a culture that values ethical behavior.

Believing that corruption undermines social progress and results in inequality, the Aquino Administration adopted a platform of government that embraces integrity in public leadership. Early this month, President Benigno S. C. Aquino III. issued Proclamation 506 declaring Dec. 9 as National Anti-Corruption Day. In the proclamation he signed, the President said that corruption undermines the institutions and values of democracy and ethical values as well as jeopardizes sustainable development and the rule of law.

The drive to promote integrity has also been undertaken by the private sector recognizing that the government cannot do it alone. In response to the government’s campaign on good governance, the Makati Business Club (MBC), together with several other organizations, launched the Integrity Initiative (II), a multi-sectoral campaign that seeks to ultimately eradicate the corruption that has worsened poverty and stunted “the development of a competitive business environment that operates on a level playing field.”

Proponents of the II signed the Integrity Pledge which is a formal and concrete expression of commitment by companies to abide by ethical business practices and to support a new national campaign against corruption. The pledge is signed by CEOs and senior officials of companies to set the top to bottom approach and oblige all members to equally commit to reform and operate businesses ethically and with integrity. With the signing of the pledge, CEOs are not only chief executive officers but they become chief ethical officers.

As a sector that takes adherence to high ethical standards seriously, the Pharmaceutical and Healthcare Association of the Philippines (PHAP) recently signed the Integrity Pledge to express full support to the national campaign.

During the signing, keynote speaker MBC Chairman Ramon R. Del Rosario, Jr. said that there are apprehensions that fostering honesty in business is a competitive disadvantage. He assured that in the alternative order that the II is trying to propagate, “ethical companies will not only reap respect but also attract the best workers, gain the loyalty of clients, be rewarded with incentives, and be given the chance to compete fairly.”

On the other hand, unethical companies will be exposed to higher business risks, and would be made to pay the price for their misconduct through exclusion from business opportunities and other penalties.

Prior to the signing, PHAP undertook two critical steps in ensuring the promotion and adherence to global and regional ethical standards in the way it relates to the health care community so that medical decisions are always in the best interests of patients. First, PHAP fully adopted the Mexico City Declaration for Voluntary Codes of Business Ethics in the Biopharmaceutical Sector which enumerated principles that should guide relationships between the pharma sector and the health care community.

The Mexico City Declaration, endorsed by Asia Pacific Economic Cooperation (APEC) Ministers, recognized that ethical interactions with health care professionals, government officials, patients, and other stakeholders are critical to the mission of the pharma sector to help save lives by developing and making medicines available. It also subscribes that ethical interactions between the biopharmaceutical sector and health care professionals help bolster patient care and advance the practice of medicine. It consists of six principles namely health care and patient focus, integrity, independence, legitimate intent, transparency and accountability.

Secondly, the PHAP Code of Pharmaceutical Marketing Practices remains aligned with the recently expanded Code of Practice being implemented by the Geneva-based International Federation of Pharmaceutical Manufacturers and Associations (IFPMA). PHAP has established the Code of Ethics in 1993 and revised it in December 2006. These Codes of Practice are being regularly updated and strengthened to adapt to changing needs. The revised IFPMA Code of Practice extends beyond promotional activities to include all interactions with health care professionals, medical institutions and patient organizations.

Advancing ethics in business will not only yield benefits to patients but will also result in trust and confidence in the biopharmaceutical sector and those who belong to it. Mr. Del Rosario was right in saying that to successfully build and institutionalize a culture of integrity in the pharmaceutical industry, the whole industry and the rest of the health care community need to make a collective commitment to embrace this new way of doing business.

E-mail the author at reiner.gloor@gmail.com.