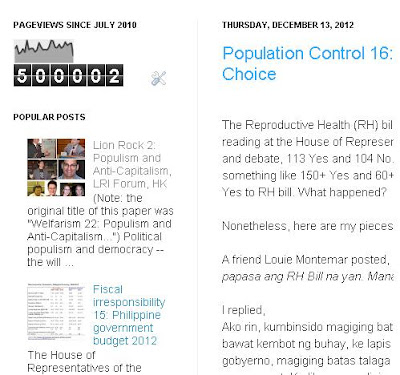 Today, around 4pm Manila time, this blog has reached the half million pageviews mark. Not a fantastic achievement, just a modest one, but something to celebrate somehow.

Since the counter started in July 01, 2010, it took 2 1/2 years to reach the half-million mark. If this trend continues, then the 1 million pageviews mark will be reached in mid-2015. 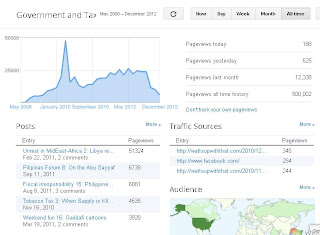 Nonetheless, it is the freedom of expression that gives me happiness to keep writing. One cannot write sensibly if he has not read or watched or discussed sensibly the subject, as writing is a mental challenge to the writer to integrate many of the things that he/she has learned and discovered.  So the process of reading, comprehending, summarizing, integrating and later writing of ideas, gives me a natural "high". 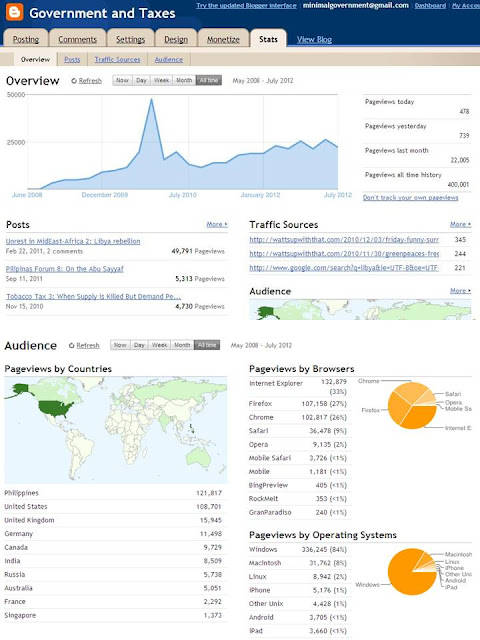 Coincidence? Somehow yes. But here's a disclosure: Five days ago, sensing that the stats might not reach the 400k mark, probably only 399,000+, I asked a few friends if they can help by visiting this site daily for the next 4-5 days even if they did not do so before. I told them there's nothing really special, I just wanted to see the 400k mark by end-June 2012 or exactly 24 months after the blog counter started ticking, a shallow concern and request. Thank you guys, you know who you are. 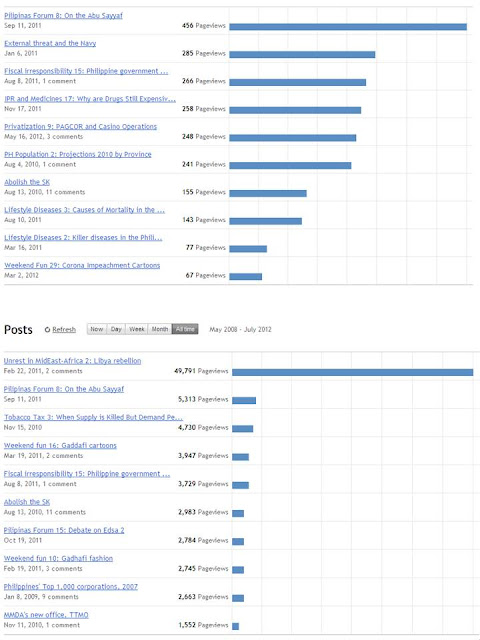 With Minimal Government Thinkers' (MGT) wobbly and drying funding, I will have to take on other jobs not related to directly promoting free markets and free trade, minimal or limited government, low taxes, in the coming months. Perhaps would be blogging less often. But MGT will continue. It's a meaningful work and advocacy, something which I have been doing for the past eight years or so. It's in my blood, bones, heart and mind. It keeps me going each day and each night. Besides, MGT has become brand by itself, I think, no matter how small or limited its public outreach has attained.
--------

I started blogging in late 2005 but for some reason/s, the stats in this blog started showing only in July 2010. Anyway, here is the total pageviews over the past 18 months, as of 6am this morning: 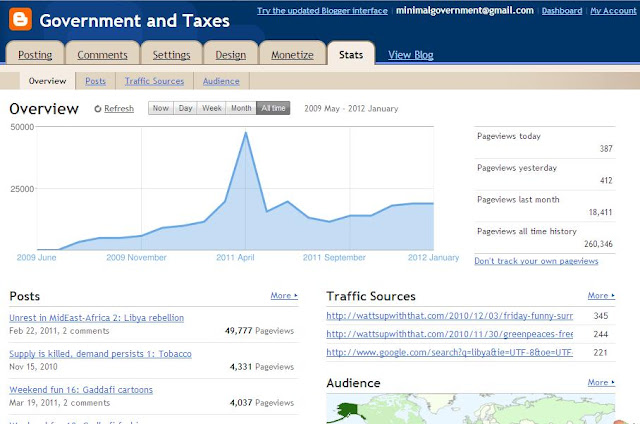 Here are the actual numbers:

There was an "outlier", a huge spike in viewership in March this year -- my post on the Libya rebellion. Some days that month, there were 3,000+ pageviews per day for a week or more. After that, things have normalized somehow.

The bulk of the readers are from the US. Note that there are no viewers from China, the biggest netizen population in the planet. That's because blogger.com, gmail and other google services, along with facebook, wordpress, twitter and other social media are banned in China. Thanks to communist dictatorship that is allergic to freedom of expression. Which makes blogs which have "___.blogspot.com" or "___.wordpress.com" at a disadvantage in terms of global ranking. 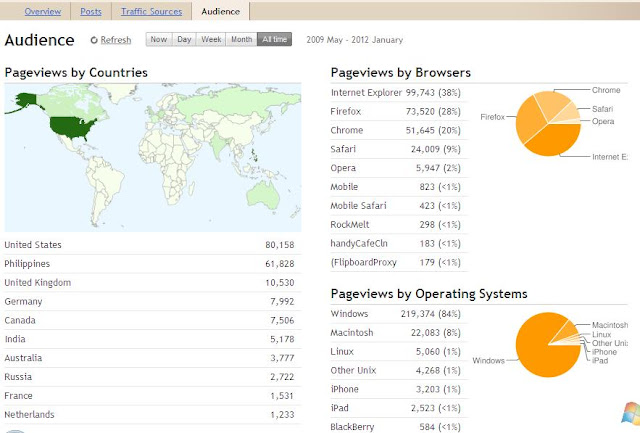 To readers of this blog, thank you. I don't make money from blogging as google adsense does not appear, I don't know why. I just write and blog whenever time would permit. What is important is my exercise of freedom of expression. There are many things to write in this world. Recognizing that I'm not exactly a good and spontaneous public speaker, I find niche in writing. The idea that there are 600+ viewers per day of this blog just excites me to keep writing. Besides, I read a lot, so I really need to write to make sure that I really understood what I have read so far :-)

I hope that readers would continue dropping by. I only have a few main messages in all the things that I write: to build a more just and peaceful society, let us have more personal and parental/guardian responsibility in running our own lives, our households and communities, and to expect or demand less "government responsibility." This way, the various justifications by government to intrude more in our lives, regulate and prohibit/coerce more, impose more taxes and fees, is also diminished.
Posted by Bienvenido Oplas Jr at 4:26 PM

The blog is really nice one and full of information we appreciate the kind of information you have provided in this post. The information are useful for all of us and we would like to thank you from the bottom of our heart for this wonderful information.