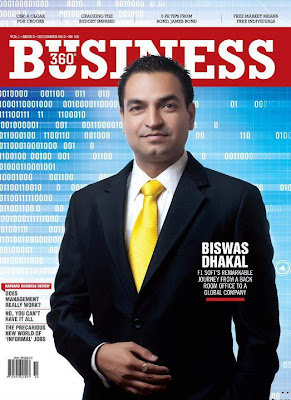 * This is the paper that I submitted to Business 360 for its second issue, published early this month in Kathmandu, Nepal. The publisher, Ms. Charu Chadha, is a good friend of mine.
--------

Nothing in the world would attract people’s passion and attention more than individual freedom. The freedom to explore their surroundings, communities and countries; the freedom to read and express their ideas and observations. The freedom to raise a family and interact peacefully with friends and strangers. The freedom to pursue an artistic or sports or entrepreneurial activity. Or even the freedom to bum around and be lazy.

So there is great misconception when people would object to free market, fearing that markets are ruled only by giant players and corporations, of monopolists and oligopolists who have connivance with government regulators and bureaucracies. Far from it.

The imposition of external coercion and prohibition should be kept to the minimum.  People cannot avoid coercion as it is a matter of degree. Parents coercing their children to turn off the tv and do their school assignment may look undesirable for the kids, but it is within the rights and power of parents exercising their parental freedom and responsibility for their family.

When government prohibits killing and murder, shooting and stabbing, stealing and land grabbing, rape and kidnapping, and uses its armed and coercive powers to implement this type of prohibitions, then it is expanding individual freedom as the productive and efficient people can do their work in peace.

It is the imposition of various other regulations, restrictions and prohibitions by government that ultimately limits if not kills individual freedom. If people are prohibited from starting a food or bakery shop, a beauty parlor or computer shop, unless they get various permits and certificates from different government bureaucracies first, pay various taxes and fees first, then such coercion is limiting individual freedom. Or if people are scared of honestly speaking their minds about the affairs of government and society, otherwise they might land in jails or be executed, then such coercion is limiting or killing individual freedom.

The main function, the raison d’ etre, the reason for existence, of government is to promulgate  the rule of law, the law against various crimes and aggression, and to protect private property rights and the citizens’ right to self expression. All other functions like running banks and hotels, casino and lottery, tertiary hospitals and universities, are either secondary or unnecessary.  Of what use to a person that he gets free or highly subsidized education, healthcare, housing and other services for his family, if the fruits of his labor and hard work can easily be stolen and taken away by bullies, either from the private or government sector? Or his kids can be abducted or murdered easily and justice is too far out to be rendered?

People should assume more responsibility in running their own lives, their households and their communities. Having solidarity and compassion with the less fortunate people, the victims of calamities and accidents, does not need legislation and coercion. It is within human nature and rationality, directly or indirectly, that such solidarity and charity can happen naturally and spontaneously.

By assuming more personal, parental and civil society responsibility in running their own lives, people can rightly assert that their income and savings are theirs and theirs alone. Taxation will be retained to finance a limited and lean government that is focused on doing its basic function as outlined above. One or two consumption-based taxation should be sufficient to finance government.